Weekend Rundown: T-Birds off to the Christmas break until the new year 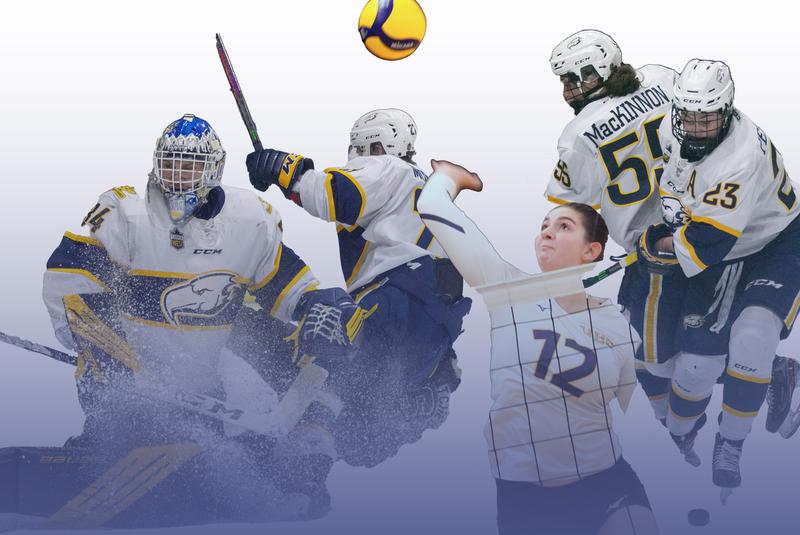 The T-Birds finished off all their games of the Canada West campaign in the first term. Isabella Falsetti and Stanley Lee

The T-Birds finished off all their games of the Canada West campaign in the first term. They will be back in action next year when the second term starts again.

With back-to-back shutouts from Rylan Toth over the weekend, the T-Birds swept the Trinity Western University Spartans and now head into the Christmas break on four-game winning streak.

UBC opened the weekend series with a rare Thursday night game at the Langley Events Centre. After a scoreless first period, which saw T-Birds forward Michael Clarke handed a game misconduct after a questionable hit to the head call, UBC would take control in the second.

Nearing the end of a T-Birds’ power play, Cyle McNabb got his team on the board first with his fourth goal of the season after Spartans’ goaltender Talor Joseph bumped the puck into his own net with his blocker. Minutes later on another power play, Jake Kryski made it 2-0 UBC as he capitalized on a rebound backdoor.

T-Birds captain Tyler Sandhu would add one more for the team before the second intermission, tipping an explosive point shot from defenceman Matthew Smith up and over Joseph.

In the third period, the ‘cross town’ rivalry would be on full display with the Spartans getting more and more frustrated by the T-Birds strong play. Spartan’s defenceman Landon Fuller would be the first to boil over, as he took a roughing call early in the final frame. UBC capitalized early on the man advantage as Kryski scored his second of the night in similar fashion to his first.

With help from goaltender Rylan Toth, the T-Birds endured a physical push from Trinity Western and walked away with a 4-0 win. Kryski and Sandhu led the way for UBC, combining for seven points and twelve shots in the game.

Despite a day off between games, the two teams came back and ready to play. The series finale on Saturday night immediately assumed the same physical dynamic that Thursday’s game displayed.

After a slow start from the T-Birds, McNabb would again score the first goal of the game. He rushed into the Spartans’ zone early in the first and beat Joseph with a perfect shot over the glove from a tough angle.

The goal would prove to be the game winner as UBC held on for a 2-0 victory. The T-Birds had multiple opportunities to run away with the lead, but the Spartans were held in the game until the very end by remarkable goaltending from Joseph who stopped 41 of 43 in the loss.

UBC goaltender Toth stopped all 48 shots he faced over the weekend and now sits atop the Canada West with a sparkling .941 save percentage and 1.62 goals against average in 11 games.

The T-Birds now happily head into the Christmas holding a Canada West best 11-1-1 record. The team will return to the ice on January 14 of the new year against the Mount Royal University Cougars. 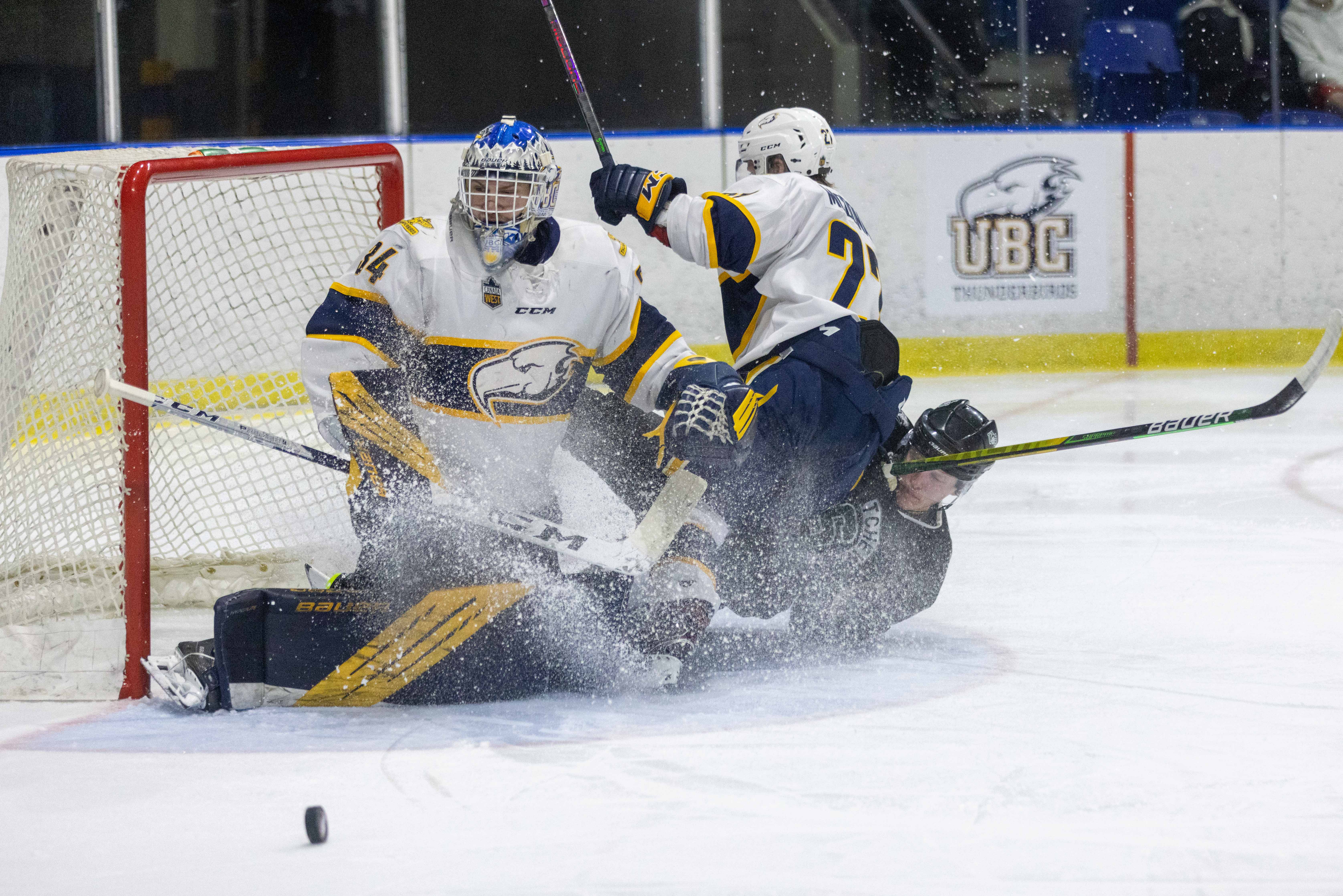 The team will return to the ice on January 14 of the new year against the Mount Royal University Cougars. File Isabella Falsetti

The T-Birds took over the scoresheet on Friday afternoon going 5–for–9 on the power play now ranked top in the division and carried the momentum over into Saturday to complete the weekend sweep over the Trinity Western Spartans.

On Friday afternoon, the stands were filled with young fans eager to watch an exciting match up of the local rivalry between the T-Birds and the Spartans. The home team did not disappoint putting on a show for the crowd to buzz all game long.

Both teams came in fast setting the tone for the game right from the opening face-off. The T-Birds opened the scoring during a 4–on–4 with Rylind MacKinnon putting one in the back of the net after a give and go pass from Chanreet Bassi and Grace Elliott.

The Spartans came back shortly with a goal of their own from the captain herself Niesha Germann. The T-Birds defence struggled at moments during the first period.

“We played good enough to win, but we weren’t happy with some of the defensive efforts,” said the UBC head coach Graham Thomas.

This first period consisted of two more goals coming from Ireland Perrott giving the T-Birds a 3–1 lead going into the second period.

With the Spartans struggling to stay off the penalty kill the T-Birds were able to cash in on a few more goals with a pair from Ashley McFadden, a second goal for Mackinnon and one each for Joelle Fiala and Mackenzie Kordic.

This speed and physical battle on the ice continued Saturday afternoon with the Spartans getting a goal just over a minute into the first period after an odd man rush allowing for Lainie Nichols to get a quick shot at the net slipping past second-year goal tender Reece Hiddleston.

The Spartans held onto their 1–0 lead, but the T-Birds battled back with Kenzie Robinson getting the team on the board after there penalty kill was tested with three back-to-back power play chances for the Spartans.

With a major delay in the game due to an injured Spartan, both teams came back hot trying to rebuild the momentum they had going. The T-Birds ended up with a 5–2 win securing the 4 points necessary allowing for them to tie for first in the Canada West standings.

“[I] am really proud of where the group is at ... The group’s good, the culture’s good, the room’s good, which is an important thing,” said Thomas.

The T-Birds will go on a break before the second half of the season as they will host their first games of 2022 against Mount Royal University on January 14. 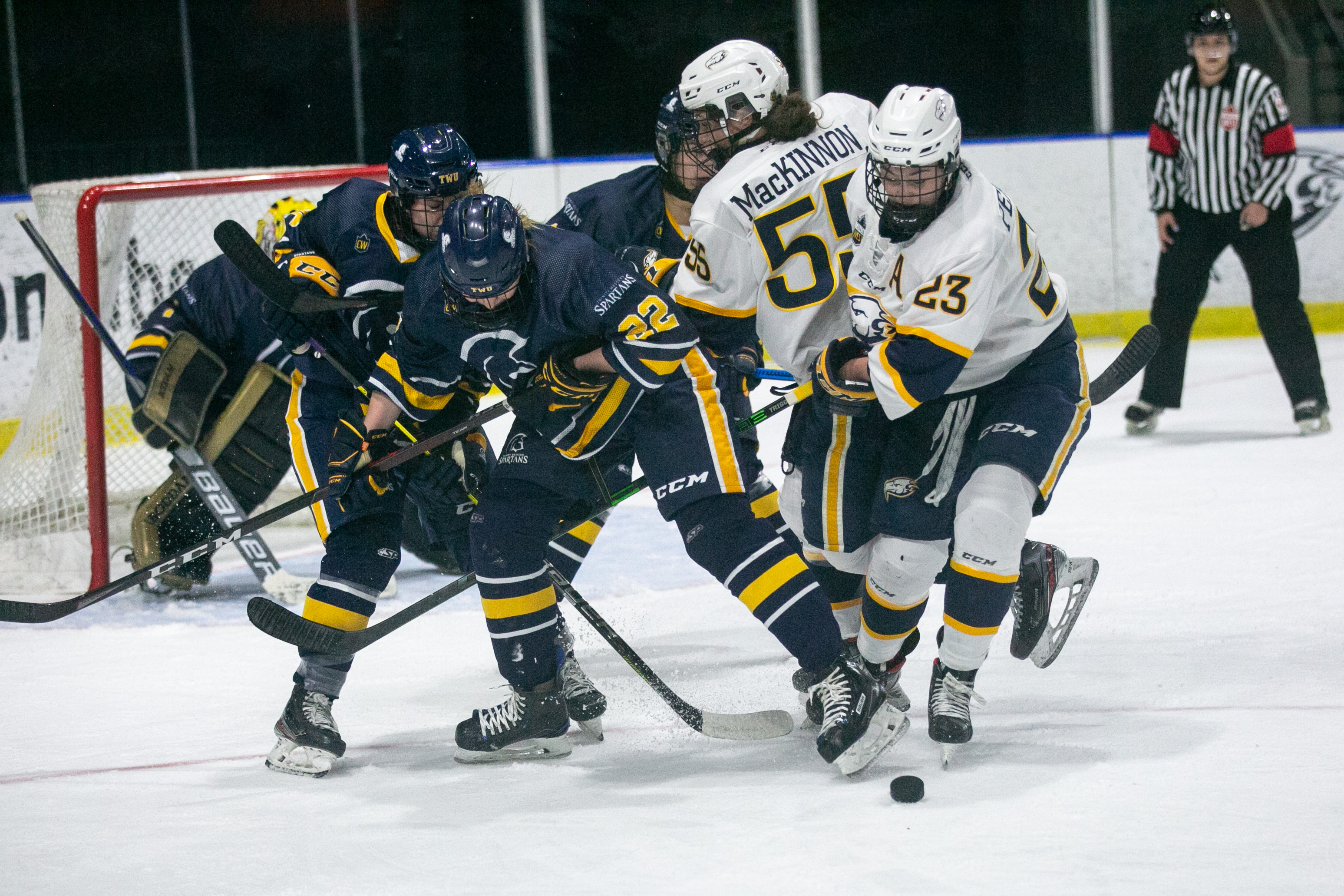 The T-Birds will go on a break before the second half of the season as they will host their first games of 2022 against Mount Royal University on January 14. File Isabella Falsetti

Women’s volleyball split the weekend against the Heat

The T-Birds split the weekend in Kelowna against the University of British Columbia Okanagan (UBCO) Heat.

On Friday, the T-Birds defeated the Heat in straight sets over the previously undefeated Heat. The T-Birds left Kelowna with a 3-1 loss on Saturday.

On Saturday, the Heat came out swinging with a series of kills. The T-Birds struggled to keep their hitting percentage up, hitting .205 while the Heat .253. The T-Birds finished the first set on 25-22.

Cara Kovacs came in clutch and set the tone at the net for UBC on Friday, with 17 kills. On Friday, Claire Cossarini led the team in kills with 11 and 7 blocks.

A series of points from UBCO’s Amaya Perry sent the T-Birds into a timeout. Scrappy defense and smart kill placements from the Heat led them to their 25-23 win in the second set. Sydney Grills from the Heat was integral to their win, leading the team in kills with 22 on Saturday alone.

The T-Birds dropped the third set 25-23, but not without a fight. The two teams stayed neck-in-neck the entire set, with no more than four points between them at all times.

The fourth set opened up with a kill from the Heat followed by two reception errors by the T-Birds off of serves from the Heat’s McCreary. The Heat’s momentum was quickly shut down by a kill by Cara Kovacs.

The T-Birds are back in action at the War Memorial Gymnasium on January 14 competing against the Thompson Rivers University Wolfpack, who have yet to win a game in the regular season. 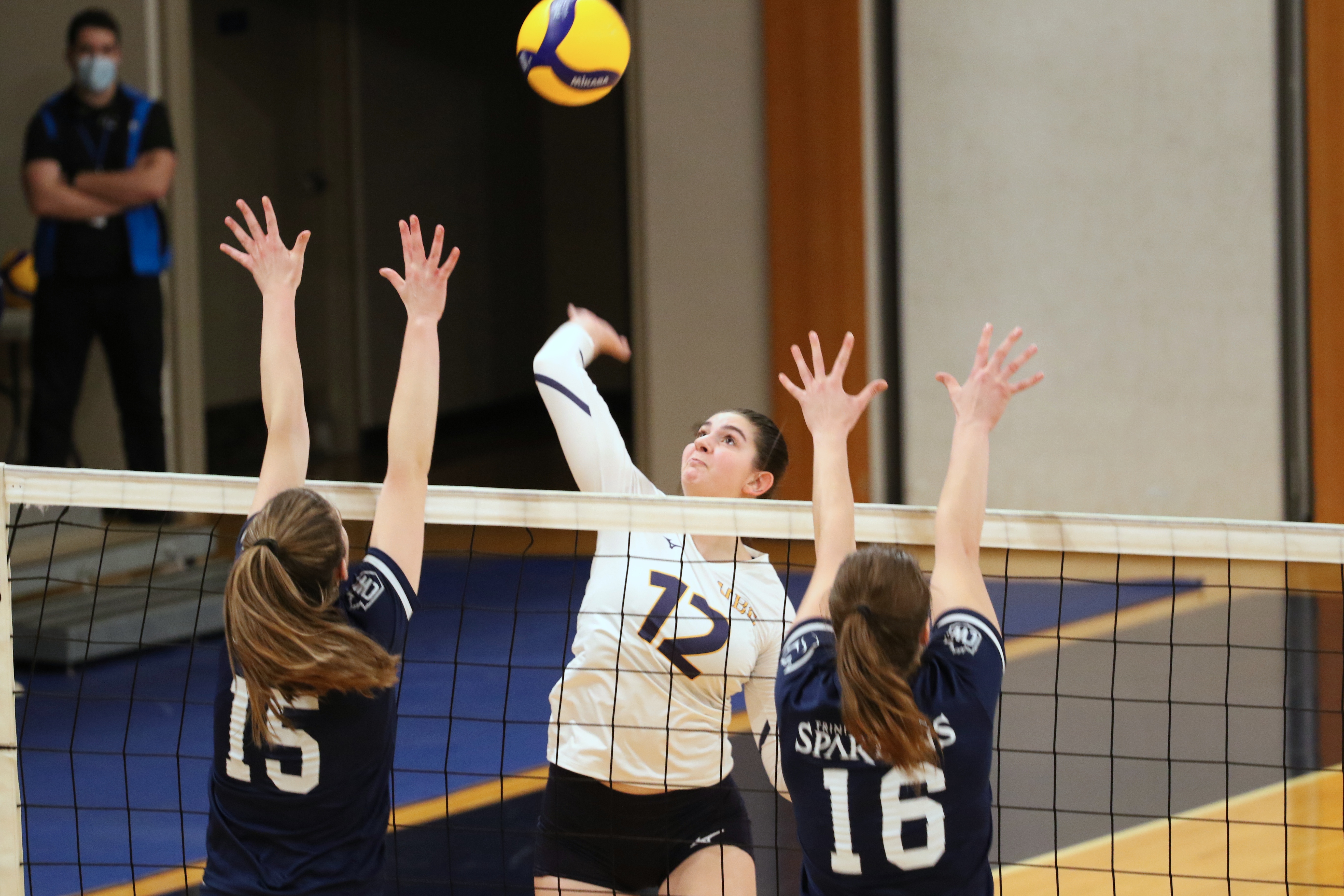 The T-Birds are back in action at the War Memorial Gymnasium on January 14 competing against the Thompson Rivers University Wolfpack. File Stanley Lee

This Weekend Rundown covers the games from first week of December 2021.