Weekend Rundown: Weekend of struggles all around for Thunderbirds

The UBC women’s field hockey team took to the pitch this weekend for their second double-header of the season after coming away with two wins last weekend in Alberta against the University of Calgary Dinos.

This weekend saw the ’Birds take on their close rivals, the University of Victoria Vikes. Both games ended in 0–0 draws as neither side could crack the other’s defence on either day.

The Thunderbirds kicked off Sunday’s game with early possession, but both teams soon traded blows equally along with with sharp passing and hard-pressing defence.

The Vikes had the first real scoring chance early in the game off a corner drive, but it narrowly missed the net. UBC responded quickly on the transition, and only a missed shot in the shooting circle prevented them from going up.

The T-Birds managed another quick chance when veteran Margaret Pham broke in alone on the Vikes goalkeeper, but a brilliant save kept the game level.

The two sides went into the half-time break deadlocked at nil-nil. Neither team looked to have any apparent weaknesses, turnovers the result of good defensive play.

The second half saw the game open up much more, with scoring chances coming in a flurry.

UBC won a quick short-corner, and only a stellar block by a UVic defender stopped UBC from taking the lead. Only a few minutes later, the Vikes broke forward on a two-on-one, but they were not able to convert.

The rest of the half saw the Thunderbirds and Vikes trade chances, winning short-corners and causing each other fits with their strong defenses.

However, neither side broke through and the game ended in a 0–0 draw. The Thunderbirds, now 2–0–2 in Canada West play, return to action next weekend against the University of Calgary Dinos on campus at Warren Field. 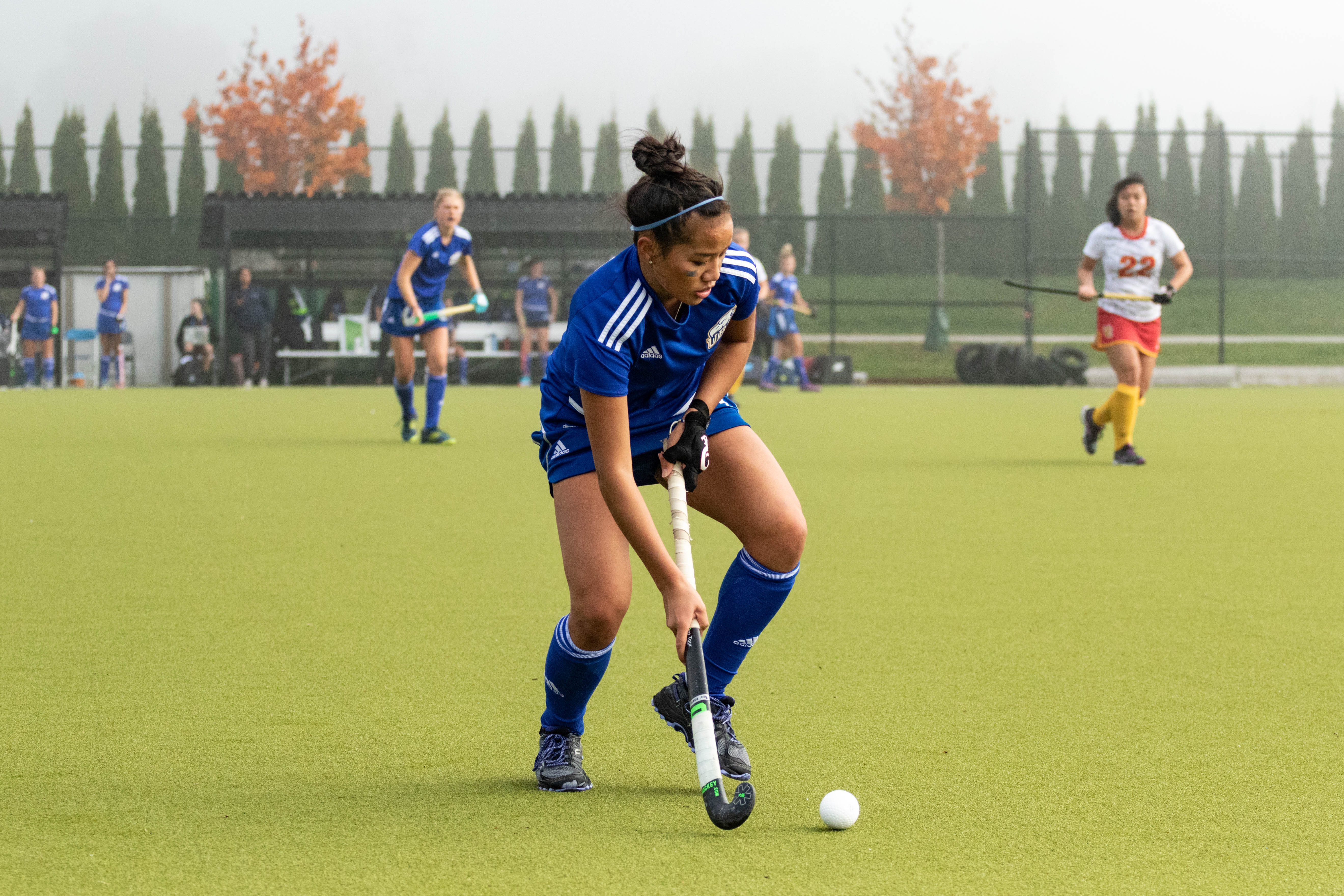 Right from the get-go, the Pack demonstrated their tactical and technical prowess. Despite the T-Birds gaining momentum as the first set closed, a rejection from TRU sealed the set for the Pack, 25–18.

The second set saw the T-Birds pull off more exciting plays, but the budding chemistry gradually fizzled as the set dragged on. TRU was more consistent and the second set ended in the Pack’s favour, 25–19.

While TRU initially led the third set, the T-Birds took the opportunity to try and erase the deficit. As the set closed, UBC outside hitter Danny Aspenlieder had an excellent set with two kills, while middle Harrison Byrne proved to be a valuable defensive asset as well. The T-Birds would win the set 27–25.

Ultimately, TRU regained its composure and that made all the difference in the game. The T-Birds lost the fourth set 25–21, closing the game at three sets to one in favour of the WolfPack.

Although an exhibition game, UBC’s performance shed light on what the team needs to work on for the upcoming Canada West season. Team coordination and communication should be the priority. The team’s optimism is to be praised, and should that combine with better team chemistry, the T-Birds could return to a similar form that saw them win the U Sports National Championship in 2018.

The T-Birds return Wednesday at 8 p.m., playing their first home game in the Blue Team Cup against the Queen’s University Gaels. 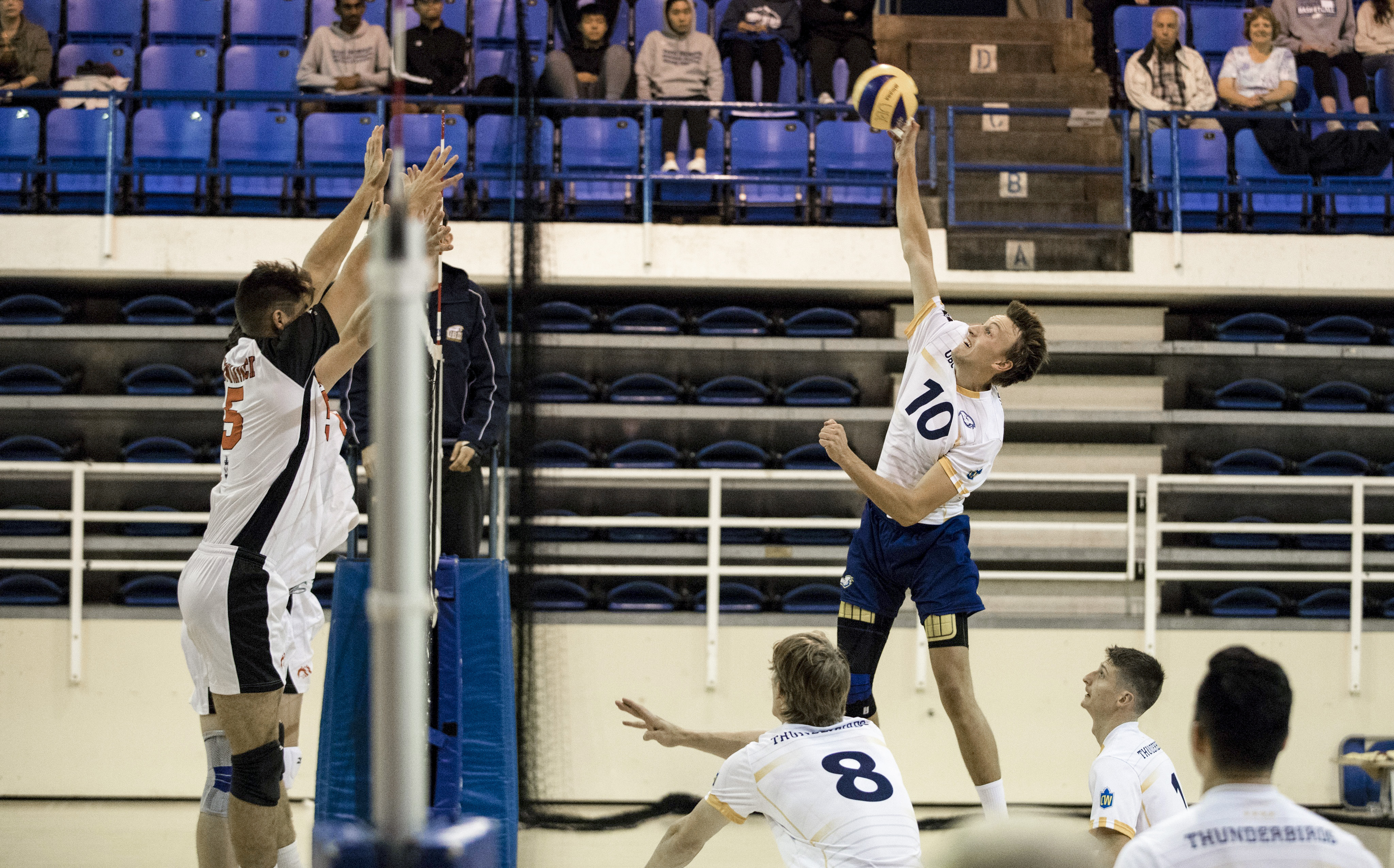 The ’Birds still have some things to iron out before they start another Canada West season. Suzuno Seki

The season could not have started much worse for the UBC men’s hockey team. In the season opener on Friday, UBC forwards Austin Glover and Maxwell James gave the home team a two-goal lead entering the third period.

Yet their opponent, the University of Alberta Golden Bears, was able to capitalize on UBC turnovers and sent the game into overtime where Alberta forward Grayson Pawlenchuk would score the game winner.

Then on Saturday night, Alberta would pitch a shutout to sweep the weekend set.

However, the more significant loss for the T-Birds was the devastating injury to veteran forward Matt Revel.

Not too long into the first period of Saturday’s game, Revel was blindsided by Alberta defenseman Sawyer Lange and trainers quickly rushed to attend to the UBC forward who was motionless on the ice.

Eventually a stretcher was brought out to carry Revel off the ice and play resumed.

From that point on, the atmosphere inside Father Bauer Arena was more subdued and both teams looked somewhat rattled by the scene.

In the end, Alberta would control the play for most of the game and win the game 5–0.

The loss of Revel is a tough blow for UBC, as they will miss his speed and scoring prowess in the lineup.

They will have to find another offensive source as they travel to Alberta to take on rivals the University of Calgary Dinos in two weeks to rebound from a very tough weekend on home ice. 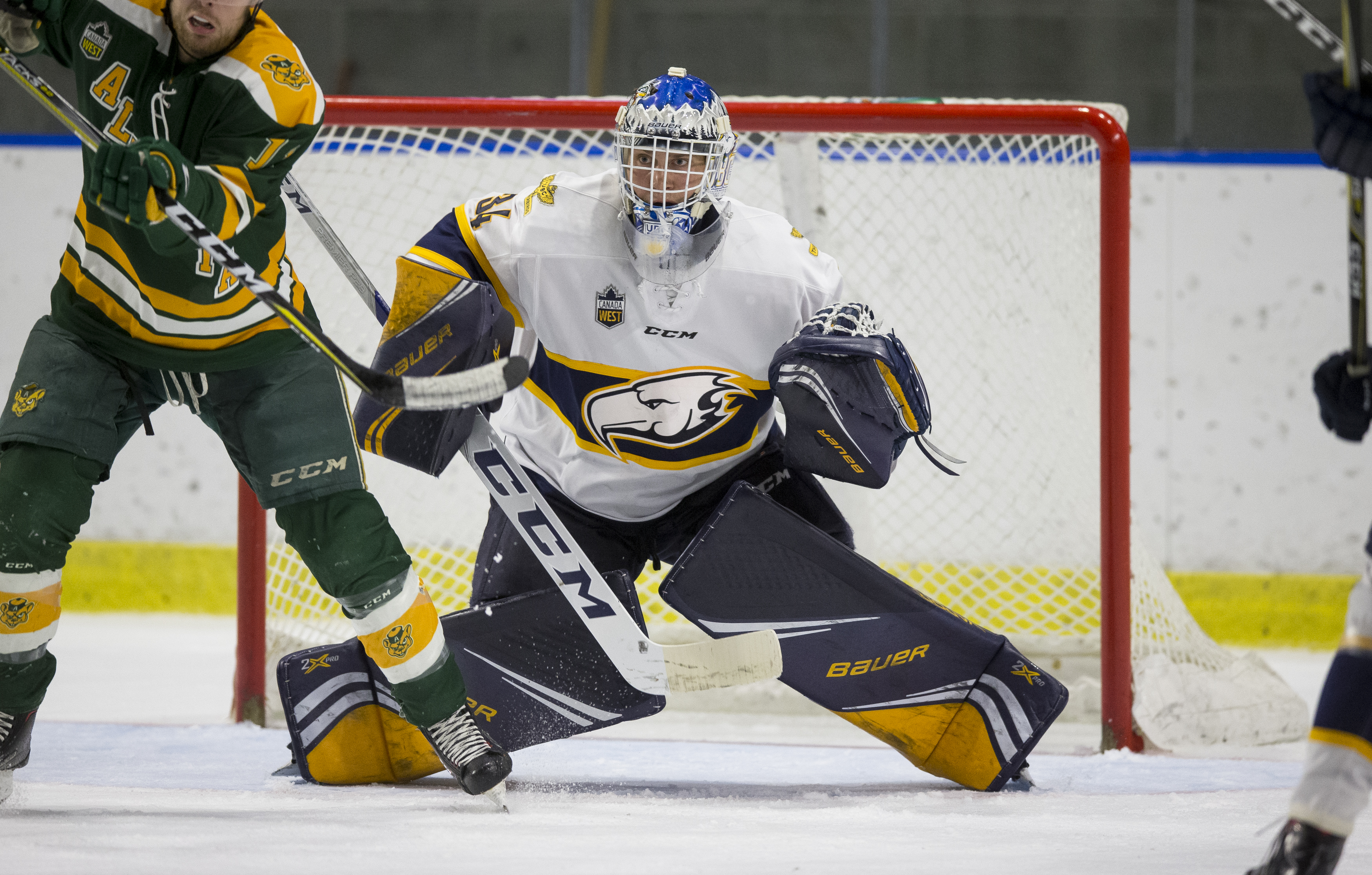 After a decently successful pre-season, UBC’s regular season did not get off to a good start. Courtesy Bob Frid/UBC Athletics 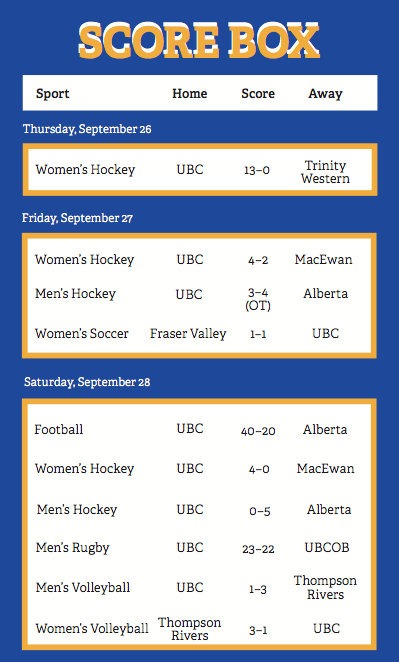