Weekend Rundown: Women's volleyball and hockey get back on track

Women's hockey split their weekend against the Lethbridge Pronghorns to earn a playoff spot while the women's volleyball team rebounded against the Regina Cougars.

The two-game series were the last home games of the season for the T-Birds. Going into the series, there was an understanding of the impactful nature of both games.

It was not just the playoff hopes on the line, but Friday night’s game was the annual Bell Let’s Talk game.

In Friday’s game, Lethbridge was able to overcome serious penalty issues to win 3–2 in double over time.

The Pronghorns gave UBC two two-player advantages and UBC’s power-play unit was able to capitalize on both. Lethbridge found themselves in the penalty box for a total of ten minor penalties.

It was the Pronghorns’ Kyra Greig who scored both the game-tying goal in the third as well as the game winner deep into overtime.

In both games Lethbridge opened the scoring, with Katelyn Breitkreuz hustling after her own rebound to open scoring in the first game. This was answered shortly by Rylind MacKinnon’s power-play goal, leaving the score tied up entering the second.

It was T-Birds’ Hannah Clayton-Carroll that brought them ahead by 2–1.

In the third period, Greig tied up the game with a dramatic goal in the dying moments of the game.

Once in overtime the two teams battled into double overtime. High intensity and desperation marked the physical game.

With both teams battling for the final playoff spot, emotions spilled over.

In the final moments of double overtime Lethbridge’s Breitkreuz was awarded a penalty shot. While no goal came to fruition, Greig put a stop to the game with her goal shortly after.

Saturday’s afternoon game was important. Entering the game, UBC had beaten the Pronghorns twice earlier in the season, before falling by one in double overtime the night before.

Again, the Pronghorns took the lead early, with Alli Borrow opening the scoring five minutes in.

UBC challenged the Pronghorns lead with a multitude of chances.

Clayton-Carroll and Jaedon Cooke got a two-on-one late in the first, which resulted in a tripping penalty against the Pronghorns.

On the power play, Clayton-Carroll scored with a close up on Lethbridge goalie Alicia Anderson, snapping it just above her shoulder and tying up the game.

UBC took two penalties for having too many players in the second, creating a chance for Lethbridge to retake the lead.

The Pronghorns’ Meg Dyer seemed to capitalize on this chance only to have the goal waved off due to another player being in the crease.

The score remained tied until Cooke picked up a game-winning goal off a rebound, sending the T-Birds into a guaranteed playoff spot with a 3–2 win.

“There’s obviously still lots of room for improvements … I just think it was good to have back-to-back weekend straights like that,” said UBC head coach Doug Reimer after the game on Saturday evening.

Not only did Gabrielle Attieh lead the T-Birds with 14 kills on Friday, she set a new three-set Canada West single-match record after making 31 serves over 3 sets on Saturday with 11 kills on a .409 hitting percentage along with 6 blocks and 24.5 points in the victory.

After giving the first set point to the T-Birds, the Cougars tried to fight back along with the two strong serving runs made by Cougars outside hitter Brittany Rousseaux, but it wasn’t enough to win a set against the surging T-Birds.

Even with a successful weekend, Reimer plans to focus on the improvements heading into next week’s games against the UBC Okanagan Heat in Kelowna.

“I think our blocking has gotten better. So, we’re going to have to be really cued in on what their attackers are doing. So, we have better transition leading a better transition offense,” Reimer added. The squad will return to UBC on February 14 and 15 for the Canada West season finale and senior night against the Brandon University Bobcats. 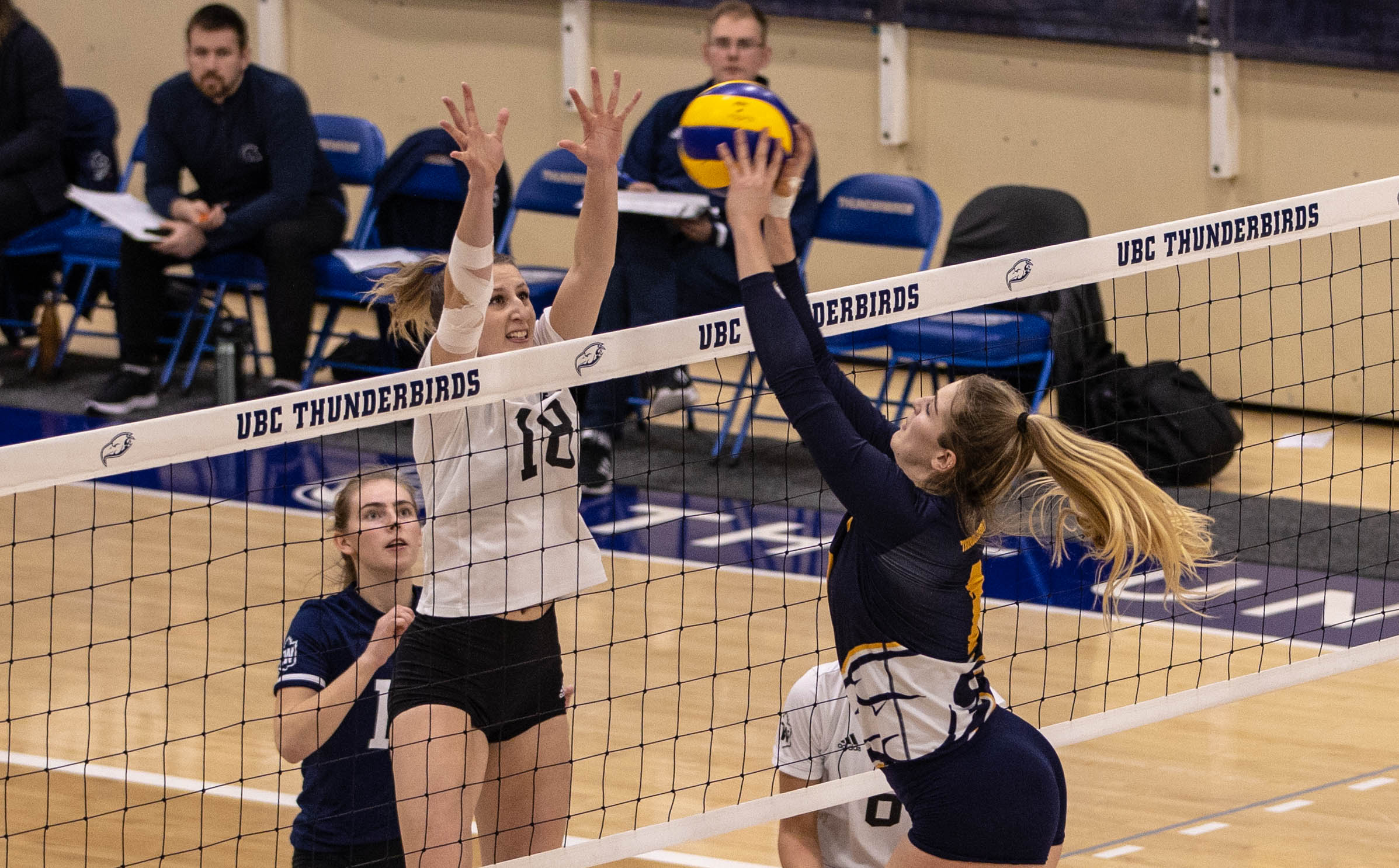