After losing three straight games, the Thunderbirds bounced back by sweeping their weekend doubleheader against the University of Calgary Dinos, winning in straight sets on both Friday and Saturday night.

The two wins bring the T-Birds’ conference record to 5–3.

The ’Birds looked fresh coming off their Canada West bye week, jumping out ahead early to take a 10–5 first-set lead Friday night. The Dinos would come back to tie it, but the ’Birds fought off the comeback and took the first set 25–19.

Saturday night’s match certainly tested the ’Birds more, as they were tied with the Dinos at 12–12 in both the first and second sets.

However, in both sets, the ’Birds dominated the Dinos down the stretch, eventually winning the first set 25–19 and the second set 25–15.

The Dinos came into the third set with renewed energy and at one point led the ’Birds 16–12. However, third-year Gabrielle Attieh led the comeback, picking up four kills on the way to tying the set 16–16 and then picking up two more as the ’Birds won the set — and the match — 25–20.

Attieh was unstoppable both nights, posting a combined 36 kills and staying on par as one of the highest scoring players in Canada West. Additionally, Kayla Oxland entered the doubleheader third in Canada West in assists, and posted another 76 combined over the weekend.

“We got beat up pretty bad two weeks ago,” coach Doug Riemer said. “But we had a bye weekend and a lot of time to prep, and I think we saw some real progress this weekend, especially tonight, in terms of our play.

“Overall, we should be encouraged.”

Thunderbirds women’s volleyball looks forward to another home doubleheader next weekend against the Thompson Rivers WolfPack. 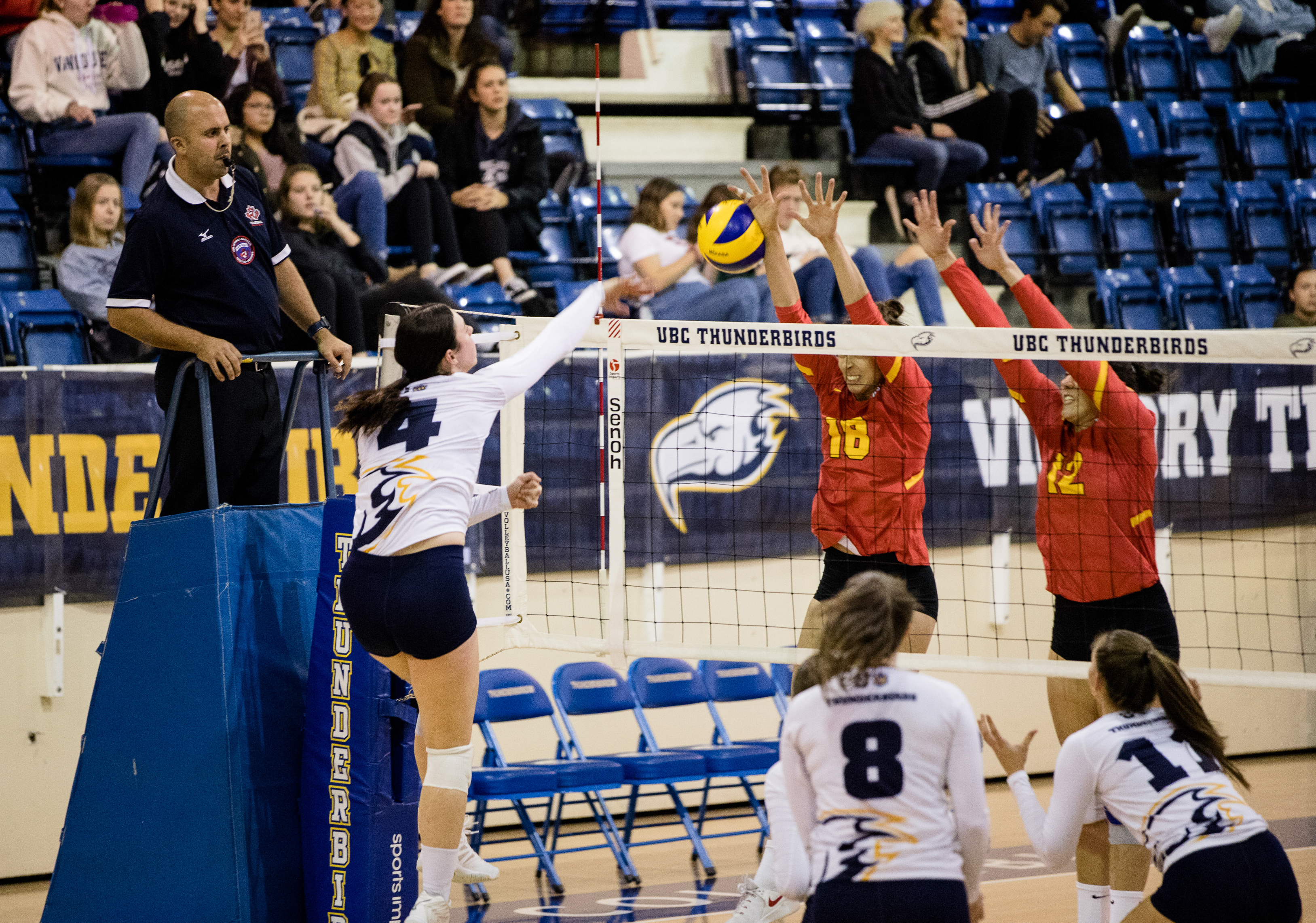 Gabrielle Attieh spikes the ball to the Dinos’ side. Aman Sridhar

The UBC Thunderbirds finished the weekend with the back-to-back win against the University of Lethbridge Pronghorns, getting a 7–1 win on Friday and 5–0 shutout on Saturday.

Needless to say, head coach Sven Butenschön was satisfied with the team’s performance this weekend.

“I think we’ve been playing really good hockey. We haven’t been getting the results, so the challenge for the team was just doing what we are doing. Eventually you are going to start scoring goals and get the results you are looking for. The only challenge we gave them was to stick to it,” Butenschön said.

Friday’s game was all about team captain Tyler Sandhu, who scored four times on the power play and earned his first career Canada West hat trick.

The T-Birds carried the momentum through to Saturday’s game, starting off strong with a first goal by Quentin Greenwood just under three minutes into the first period. Colton Kehler added another in the first period, which was assisted by Sandhu and Austin Glover. 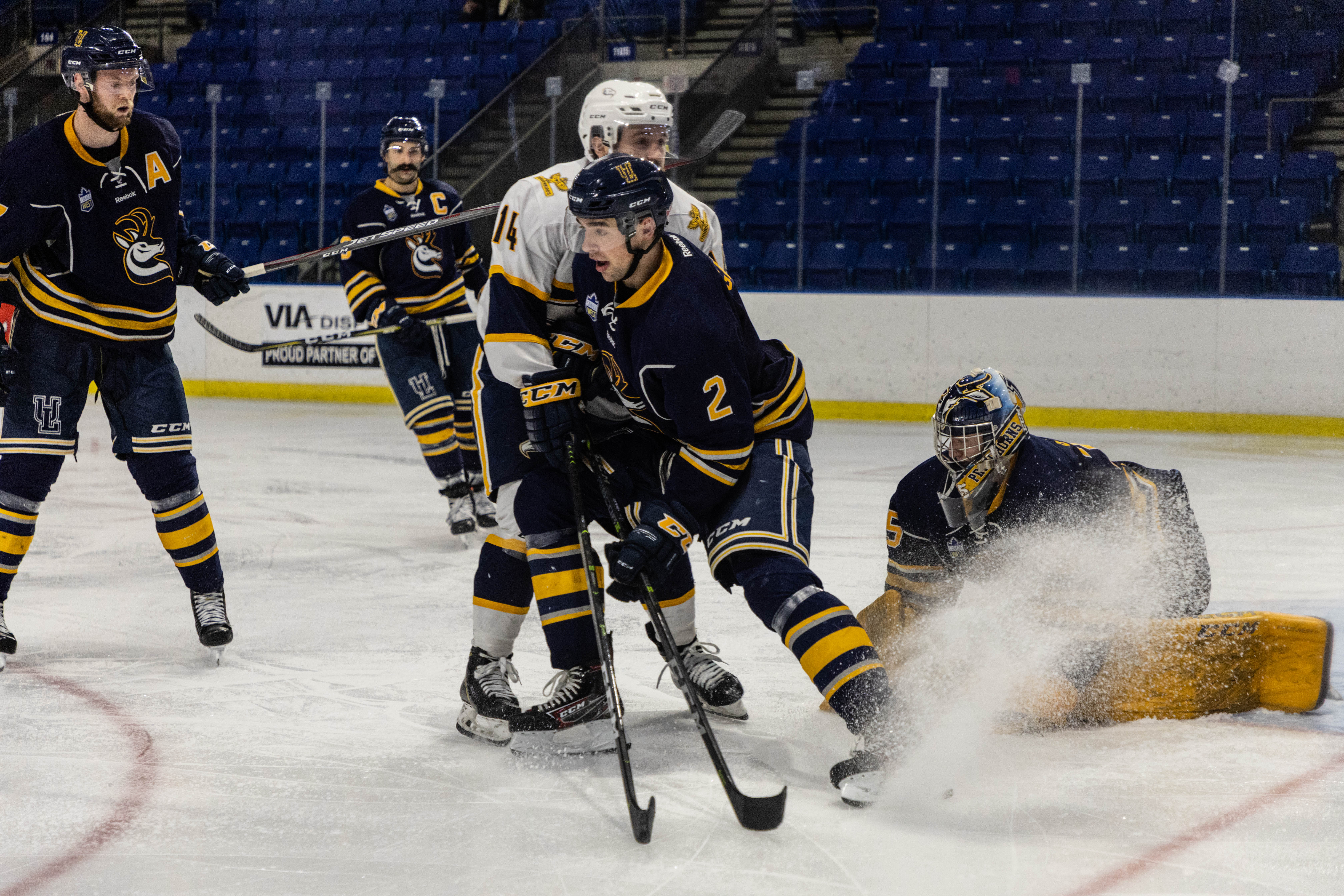 A Pronghorns player brakes hard in front of his own goalie. Salomon Micko Benrimoh

Although the T-Birds were up by 3–0 by the end of the second period, they kept the Pronghorns away from their end and preserved Patrick Dea’s shutout.

Backstopped by great defensive play, Maxwell James finished off the game with his second goal of the weekend off assists from Carter Popoff and Austin Vetterl, giving the T-Birds a 5–0 win.

Butenschön hopes the team will continue this positive momentum for next weekend, when the T-Birds face the Mount Royal University Cougars. 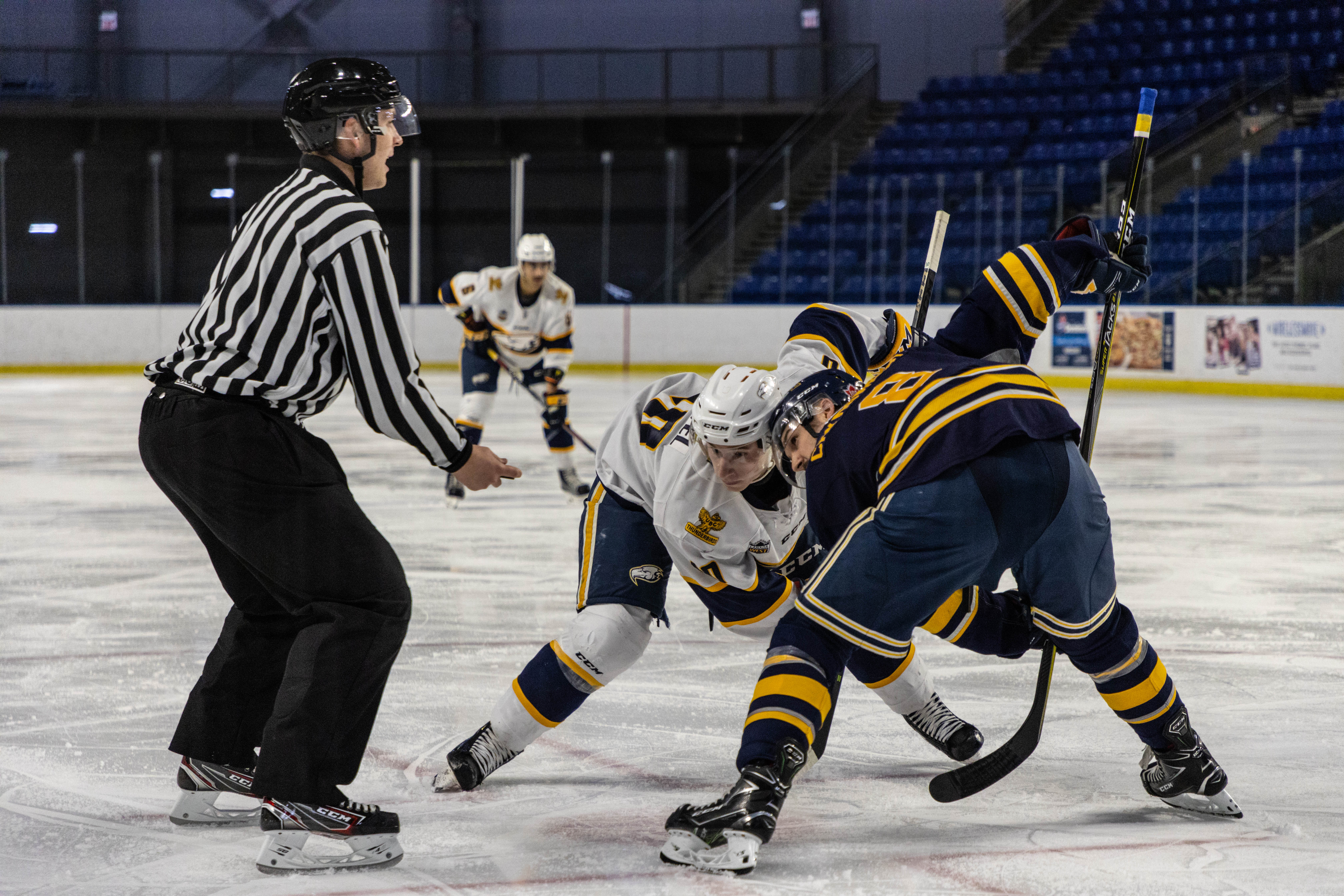