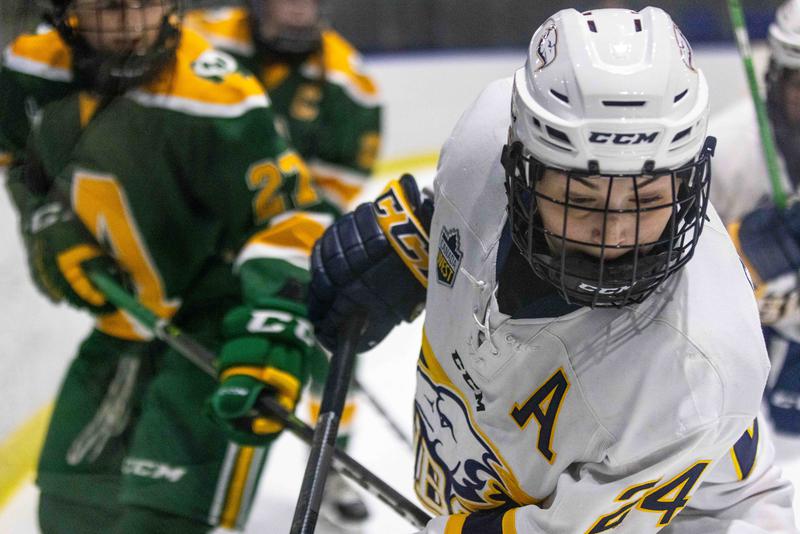 After a close series opening game, the UBC women’s hockey team dominated the University of Alberta Pandas on Saturday and completed the weekend sweep, improving to 6-2 on the season.

On Friday night, after a scoreless first period, the Pandas came out flying. A UBC turnover in the neutral zone early in the second led to a 3-on-1 for Alberta. Despite Elise Hugens’ best efforts, Megan Wilson powered the puck past the netminder to give Alberta the lead.

Later in the second frame, after sustained offensive zone pressure from the T-Birds, fourth-year forward Ireland Perrott jammed the puck through a pileup in front of the Alberta net to tie the game at 1-1.

With just over one minute left, a point shot from UBC defender Ashton Thorpe missed the net and took a bounce off the end boards to the front of the net. Ashley McFadden lifted the puck past the sprawling Alberta goaltender to give the T-Birds the lead.

Rylind MacKinnon iced the game with ten seconds left, scoring her fourth of the year into the empty net to give UBC the 3-1 Win.

Less than 24 hours later, the T-Birds dominated right from the opening face-off.

Under three minutes into the game, Karine Sandilands broke through the offensive zone and roofed the puck past the blocker of Alberta goaltender Kirsten Chamberlin for her first career Canada West goal.

Following the milestone, the T-Birds were forced to kill off a lengthy 5-on-3 power play for the Panda’s. With some courageous blocks and stellar goaltending from Hugens, UBC killed it off and converted on a power play of their own not long after to take a 2-0 lead.

Rylind MacKinnon would add one more for the T-Birds before the end of the period and send her team into the first intermission up 3-0.

In the second, both teams played excellent defence. UBC controlled the neutral zone, and extended their lead to 4-0, thanks to a goal from team captain Kenzie Robinson.

In the final frame, the Panda’s created momentum off of multiple power play opportunities, but T-Birds goalie Hugens was unbeatable. She was instrumental in UBC walking away with a 4-0 victory as she stopped all 23 shots for her third shutout of the season.

The T-Birds hit the road next week and will face off against the University of Saskatchewan Huskies, who they currently sit tied with in the standings. 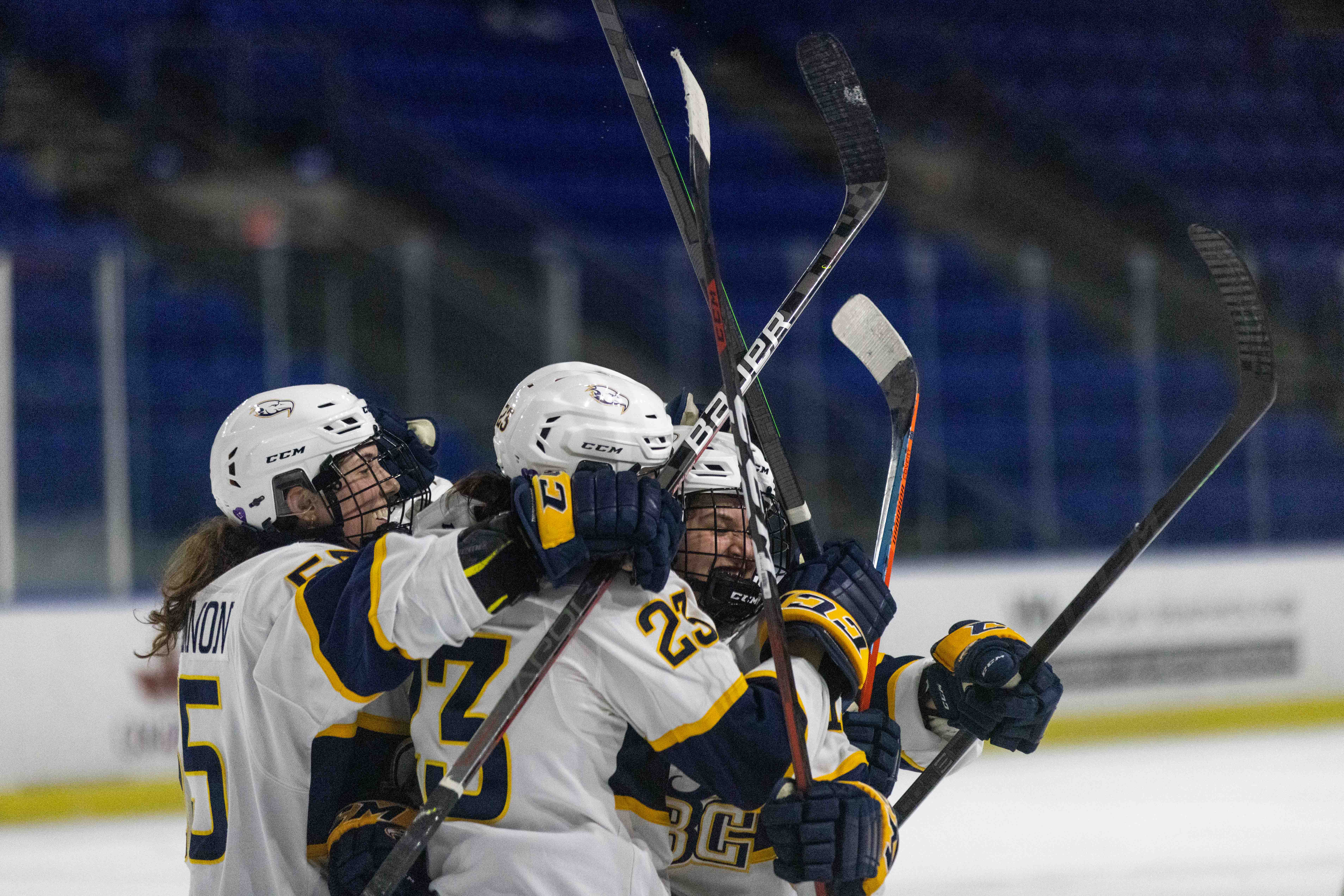 The T-Birds hit the road next week and will face off against the University of Saskatchewan Huskies. Isabella Falsetti

Despite valiant efforts from their top players, the T-Birds lost their first two games of the season.

Early on Friday night, Golden Bears rookie Josh Prokop broke through the UBC zone and wired the puck past Rylan Toth to give his team the 1-0 lead.

Following the goal, the game adopted a frantic pace, with the two teams trading turnovers and chances. With just over three minutes left in the opening frame, UBC’s Carson Miller displayed tremendous patience as he danced through the offensive zone, outwaited Alberta goaltender Taz Burman and squeaked the puck into the net to tie the game.

Despite six opportunities on the power play for the T-Birds, the game would remain tied through regulation, seeing UBC head to their second overtime game of the season. The game grew in physicality throughout, with Golden Bears captain Clayton Kirichenko throwing multiple thunderous hits.

In the first overtime, both teams exhibited their speed in transition, but ultimately, defence controlled the momentum.

Thanks to Toth’s heroics, the game headed to its second overtime frame, and treated the fans with five minutes of 3-on-3 hockey.

T-Birds forward Miller looked to end the game early in the fifth period, but he was levelled by Kirichenko as he entered the offensive zone, and it resulted in Alberta taking the puck the other way.

On the backcheck, rookie Cyle McNabb took a penalty and sent UBC to the penalty kill. Just twenty seconds into the man advantage, Alberta’s Matt Fontaine picked up the puck in front of the net and tucked it past Toth to give the Golden Bears the 2-1 win.

Both goaltenders received praise in the form of a game star selection, with Toth stopping 37 of 39 shots and Burman stopping 28 of 29.

On Saturday night, the Golden Bears started the series finale with speed, blowing by the tired-looking UBC defenders and testing Toth early.

The T-Birds goaltender had to be sharp as his team got their legs. He was rewarded early as UBC potted two quick goals, courtesy of Chris Douglas and Scott Atkinson. Toth stopped 13 shots in the opening frame and helped the T-Birds head into the intermission with a 2-0 lead.

Unfortunately, the Golden Bears took charge in the second period and seized the lead with two goals from Gary Haden and one from Daneel Lategan.

Despite numerous highlight-reel saves from Toth, UBC couldn’t seem to find the confidence they played with later in the first. In the final frame, the teams traded goals, but the T-Birds couldn’t beat Alberta goaltender Nick Schneider in the final minutes, and the Golden Bears completed the weekend sweep with a 4-3 victory.

UBC will return home next weekend to face Mike Babcock and the University of Saskatchewan Huskies. The Huskies are currently the top team in the conference and it will provide the T-Birds their toughest test yet. 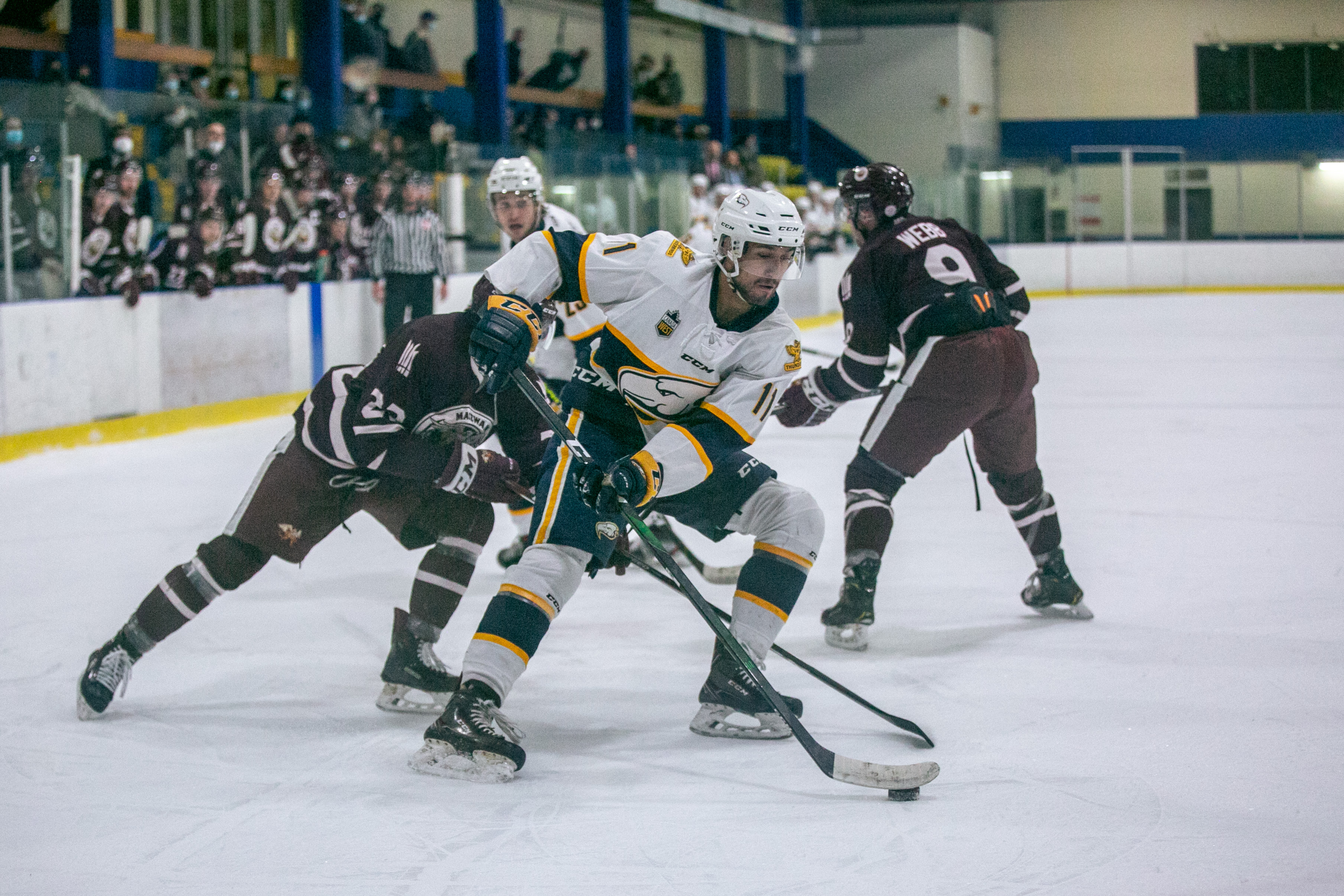 UBC will return home next weekend to face Mike Babcock and the University of Saskatchewan Huskies. File Isabella Falsetti