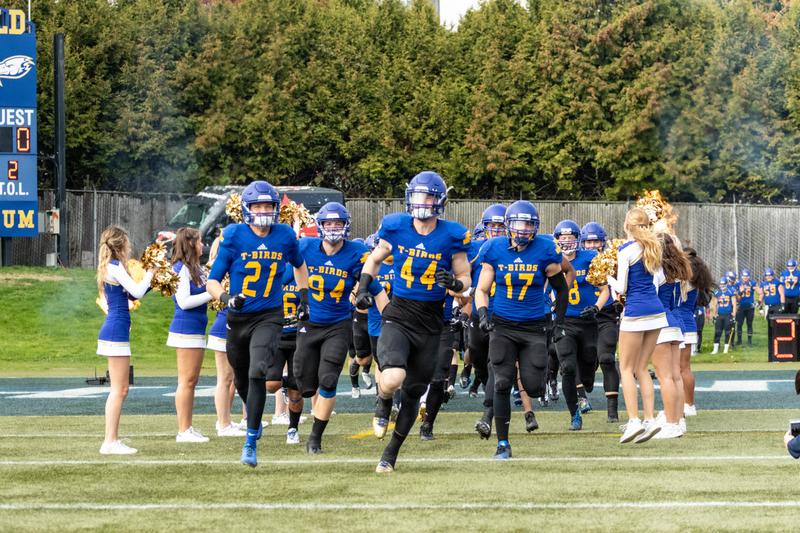 UBC football takes the field in their game against Alberta. Salomon Micko Benrimoh

It’s that time of year when fall sports come to a close and winter sports get going: the crossover weeks where almost all UBC varsity teams are in action. With 23 games on the go this weekend, there are lots to talk about in terms of results. Here are five of the most prominent events in varsity from Friday to Sunday:

Championship run comes to a close for women’s field hockey

It was an absolute heartbreaker for the Thunderbirds this weekend, as they fell out of the running for Canada West’s lone national field hockey berth on goal differential. With an identical record to the University of Victoria (UVic) Vikes, 4-1-3, and an identical 1-1-2 record against each other, as well as the same goal differential in their head-to-heads, it came down to who scored the most overall. UBC ended their season this weekend with at +5, while UVic had +10 — sending the Island team to nationals. It was a terrible way to end a season for the Thunderbirds, and not indicative of the dominant performances the team still put in this year.

We won’t harp on this one too much right now, as the result still stings. 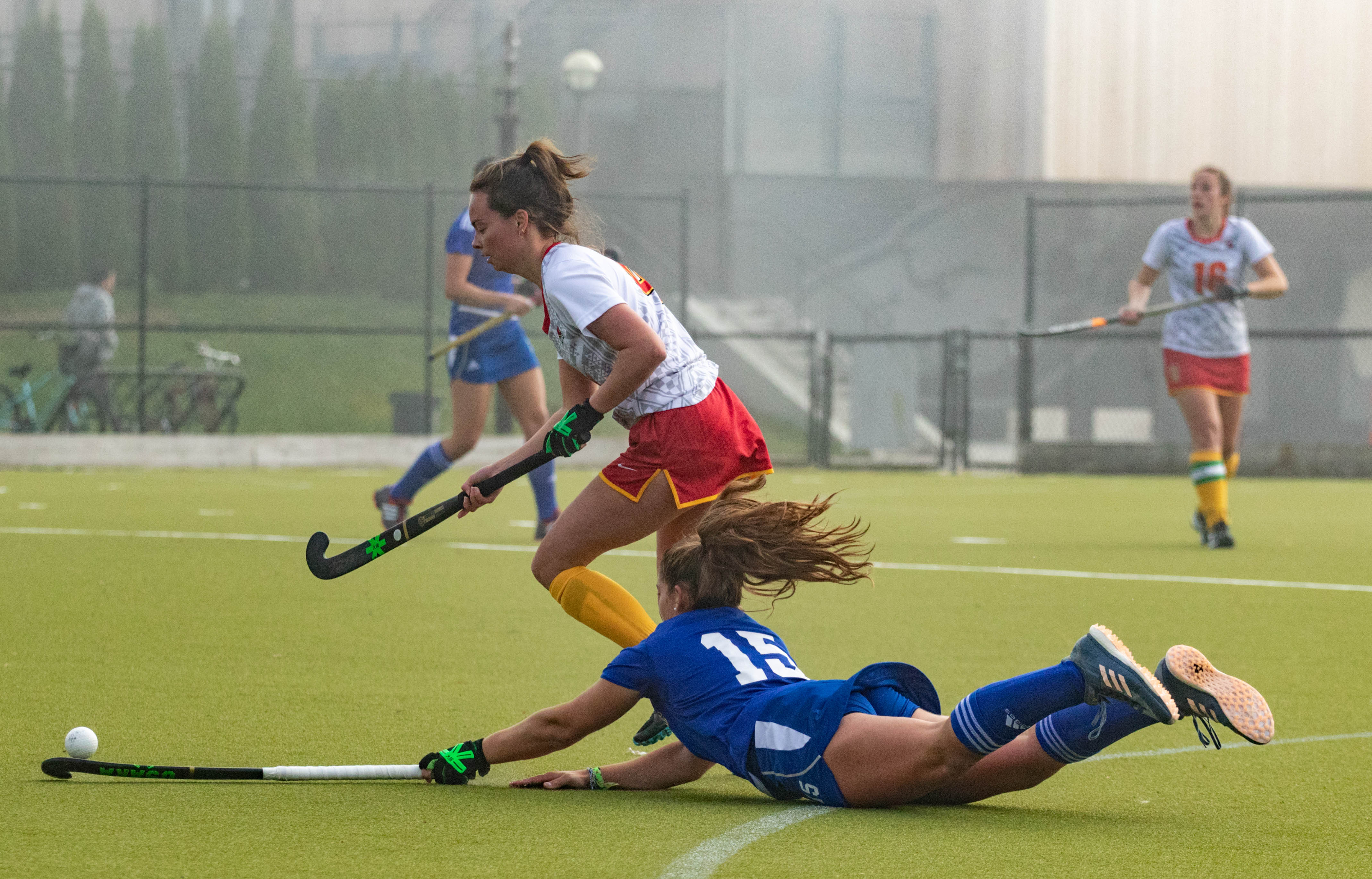 The Thunderbirds are heading home from Alberta with some hardware! Playing Alberta on Sunday morning for the Canada West bronze medal, UBC came out on top with a 27-5 win.

It’s the team’s first top-three finish in the league since 2010, thanks to tries from Rori Wood, NIcole Mallow, Rachel Choboter, Emily Baker and Tess Woldring. Although the win doesn’t put them through to the U Sports championships, it does signal changing luck for the women’s team — we’ll have to see what next season holds for them.

Football are heading to playoffs!

It’s been a turbulent season for the ’Birds, but all is well as they take claim a spot in playoffs with their win this past weekend.

Three touchdowns, a safety, a rouge and two fields goals would push UBC ahead 30-11 against the Alberta Golden Bears on Saturday afternoon at T-Bird Stadium. Though they still have one regular season game to go against the Manitoba Bisons, the win — and their most convincing one so far this season — gives them some breathing room in the league.

The team will likely face the Saskatchewan Huskies in the first round of playoffs if the standings stay as is, a team they beat just two weeks ago. That said, if they lose to Manitoba next week, they could be the lowest seed going into the playoffs and face the dreaded Calgary Dinos right out the gate. UBC will need to pull off a win on Saturday to into playoffs on a positive run. See this weeks "The Blitz" for further details. 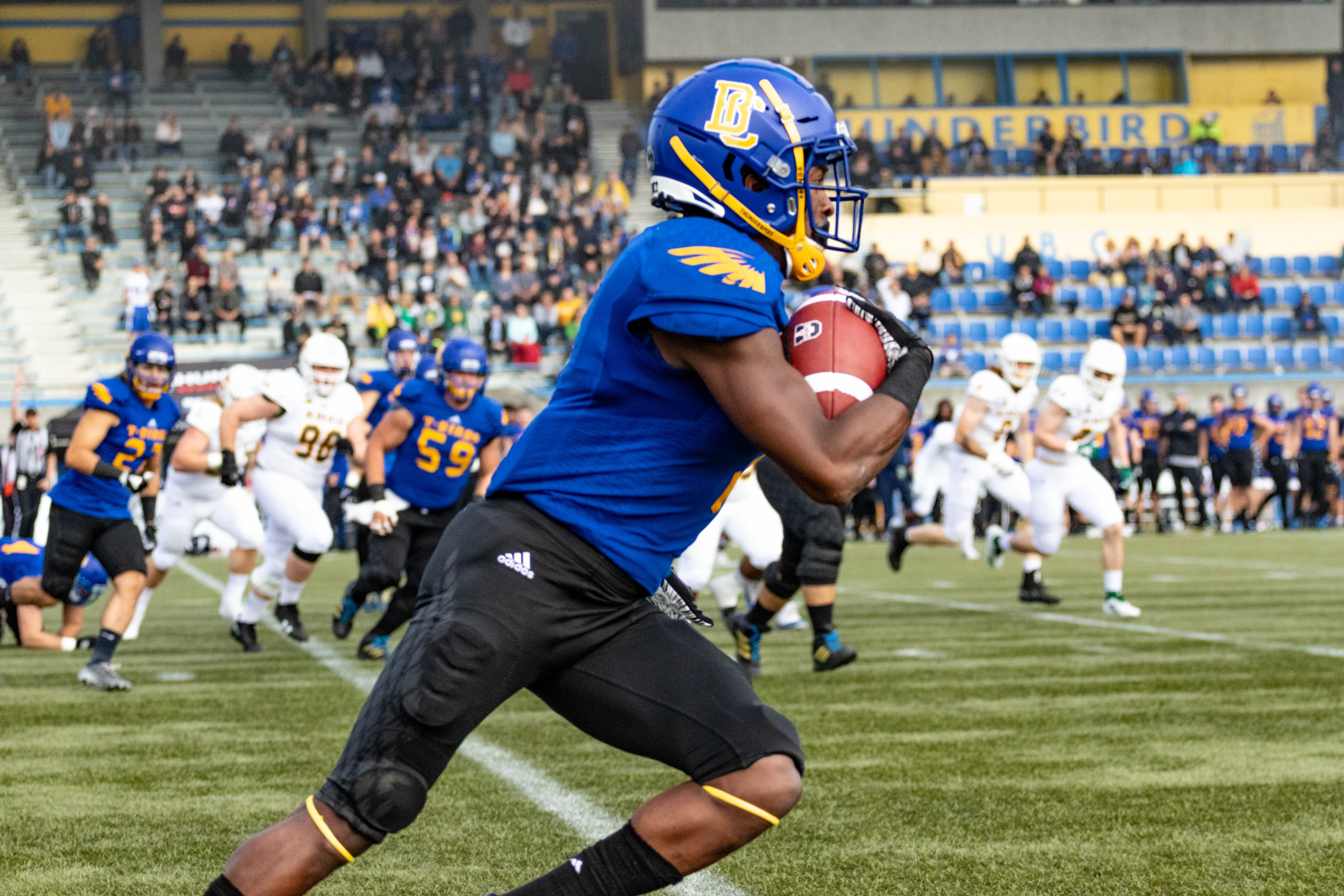 The T-Birds almost did the full unbeaten sweep of their regular season for 2018/19, but they were stopped by the Thompson Rivers University (TRU) Wolfpack in their last game with a 1-0 loss. Josh Banton would score the only goal of the match for TRU in the 45th minute.

The loss puts UBC on a 13-1-2 record going into Canada West playoffs, still leaving them well ahead in first position in the Pacific Division. Trinity Western is their closest opponent in the region, with an 8-3-4 record.

It’s likely not the way UBC wanted to ended their regular season, but the team will still look to dominate going forward through playoffs and into the nationals they are hosting this year in early November.

Women’s hockey are on a three-game shutout streak

Simply put: women’s hockey is on fire so far this year. Since their home-opening loss against the Lethbridge Pronghorns on October 5, the Thunderbirds haven’t lost a single game. What’s more, they have shut out their opponent in all of their last three games: 3-0 over Mount Royal on October 13, and two 4-0 wins over Calgary this past weekend.

Perhaps most impressively, all eight of their goals came from different players. On Saturday, Ireland Perrott, Ashley McFadden, team captain Celine Tardif and Mathea Fischer rounded out the scoring quarter for UBC — they sunk the Dinos with two goals in the first and two in the third. On Sunday, Logan Boyd opened the scoring for UBC in the first, Ryland McKinnon made it two for UBC in the second, and Hannah Clayton-Carroll and Emily Costalas doubled the lead for the T-Birds in the third.

Needless to say, it was a dominant weekend for the T-Birds. They currently sit at the top of the league with a 4-1-1 record.

Both men's and women's volleyball also got their Canada West season's underway this weekend. Elizabeth Wang