Men's rugby and basketball earned big wins respectively over the weekend and will look to carry that winning momentum into the new decade.

Men’s basketball sweep Lethbridge Pronghorns back to back

The Thunderbirds came into the game with the historical upper hand, leading the Pronghorns 13–3 in the all-time series. Opening the score with a layup in the paint was Thunderbird guard Jadon Cohee.

The match was back and forth within the first quarter with both teams finding ways to put themselves on the scoreboard.

After trading leads, the T-Birds came out on top at the end of the quarter 31–23. The game remained close for the next three quarters. The T-Birds began to pull away and entered the fourth quarter with the score in their favour at 84–70.

A key to UBC being able to maintain a lead was by subduing Pronghorn’s leading offensive threat Kyle Peterson.

This defensive success was not met by Lethbridge. They struggled to shut down the Thunderbirds offensive force who consistently found shot success from the field and beyond the arc.

The Thunderbirds biggest offensive threats of the night were Cohee with 23 points and 7 assists and Manroop Clair with 22 points. Third-year arts student Grant Audu also reached the 20-point marker with 20 points himself as the Thunderbirds took the game 109–86.

Audu led the T-Birds in Saturday’s game with 19 points as the ’Birds took home a sixth-straight win 88–80. They’ll be back in action against the University of the Fraser Valley Cascades on January 3. 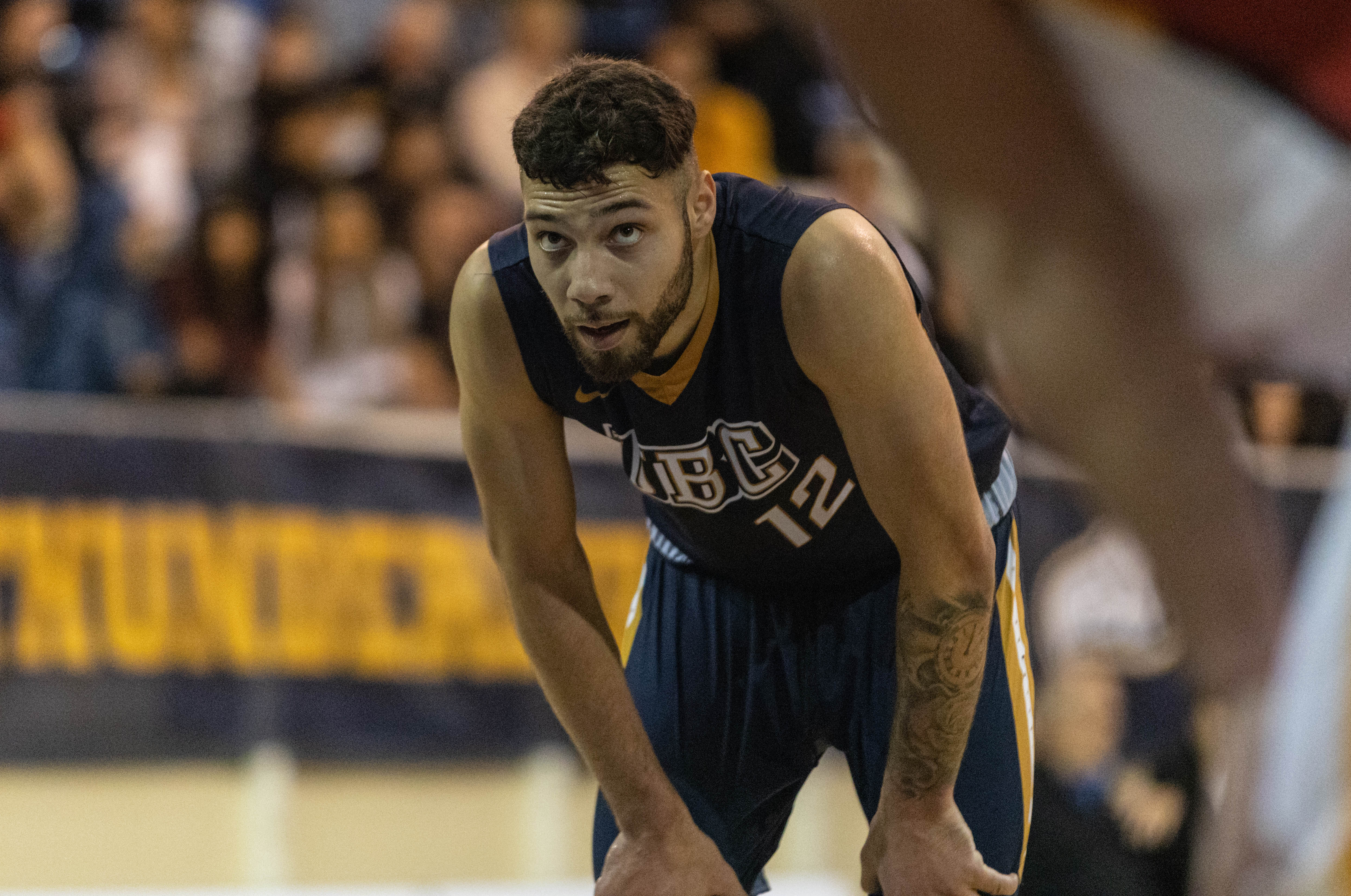 A cold day didn’t keep the game between UBC and Vancouver Rowing Club (VRC) from getting heated.

The Thunderbirds came out of the gate strong when a missed penalty kick by UBC translated into a forced return by VRC, giving the T-Birds possession once more.

UBC’s Owain Ruttan ran too hard for his first defender, a strength that seemed to convince a further defender not to attempt a tackle.

Ruttan continued with impressive speed, powering into the opposition tryzone and drawing first blood for the ‘Birds. A successful conversion from Jack Scher made the game 7–0 within the first four minutes.

Despite good play, including some very impressive offload work from the T-Birds, they would not score another try in the first half.

However, Scher would slot two penalty kicks for a total of six points and the score at half time read 13–0 for UBC.

After UBC seemed to regain possession off of a Vancouver Rowing lineout, the opposing team recovered the ball.

Vancouver Rowing kept applying pressure. A ruck infraction inside their 30 saw UBC give up a penalty which would then be successfully kicked bringing the score to 13-10 for UBC.

Only three points behind, Vancouver Rowing attempted to draw penalties from the ’Birds, opting to kick into UBC’s end whenever possible.

This tactic saw VRC equalize the game at 13–13 after a UBC scrum infraction occurred within VRC’s kicking range.

The ’Birds would be the next to strike as strong running, offloads and an excellent recovery by UBC’s Callum Botchar of a dropped ball saw the player score in the corner.

UBC would put up yet another unconverted try in the same corner. A well-placed kick by UBC’s John Jubenvill saw a teammate ground the ball in the VRC end, making the score 23–13 After a UBC yellow card, Vancouver Rowing was dominant in the scrums and drew 4 penalties on UBC’s 10-metre line in quick succession.

Despite their best attempts to draw a further yellow, tempers in the game finally boiled over with Vancouver Rowings fullback being sent off the pitch for verbally abusing the assistant referee.

Despite a prolonged period of play deep in UBC’s end, VRC would not score. UBC’s defensive unity came up strong when it counted, eventually running out of their own end. The game ended 23–13 for the Thunderbirds. 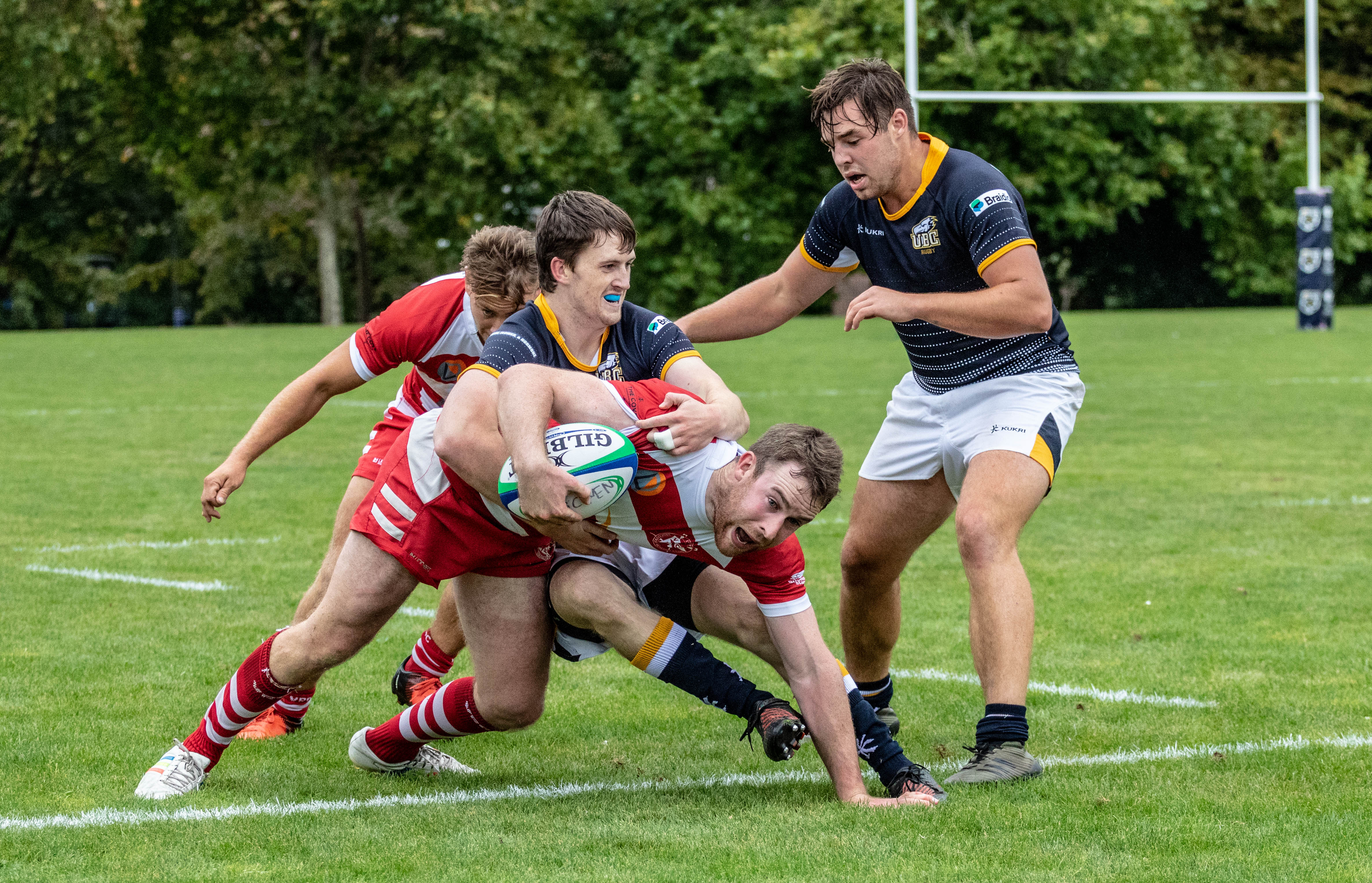 This weekend’s game between the Thunderbirds and the Vancouver Rowing Club was a heated battle. File Salomon Micko Benrimoh