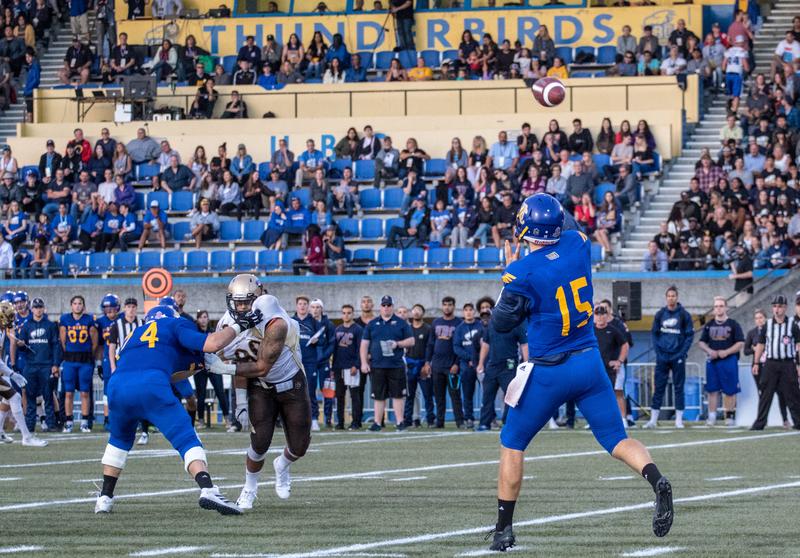 In varsity’s opening weekend of the 2018/19 season, UBC’s soccer and football teams got the blue and gold off to a flying start.

While men’s soccer made it a two-game weekend, travelling first to the University of Fraser Valley on Friday before making their way back to T-Bird stadium for their home opener on Sunday, women’s soccer set out to take the first points in the Legends Cup out at the University of Victoria on Saturday. And, with space available at T-Bird stadium, UBC football made their home opener one to remember on Saturday night — claiming a big first win against the Manitoba Bisons.

Here’s what you need to know about this past weekend’s action:

1. Steering the team to victory

Danielle Steer opened the scoring for UBC women’s soccer season, netting the only goal in their game against the University of Victoria on Saturday afternoon and securing the first win in the Legends Cup tally for the ’Birds. Fellow striker Michelle Jang put up three shots in the game, just behind Steer, who had four — a promising start for the first-year.

First-year striker Caleb Clarke netted two goals for the Thunderbirds men’s soccer team over the weekend, one against Fraser Valley to keep UBC on a tie for the day. In Sunday’s match up against Trinity Western, he scored one of UBC’s three for the 3-0 win. The 25-year-old Richmond native joins UBC from Whitecaps FC and German team FC Augsburg.

UBC rookie Thomas Gardner, a fellow Whitecaps recruit, earned man of the match honours in his first Canada West game on Friday. He notched four shots in the game, while playing a key role in the midfield for the Thunderbirds.

Michael O’Connor tied the UBC record for passing touchdowns in football’s 30-20 win over the Manitoba Bisons — his 71st of his ’Birds career, tying with a record set 40 years ago by Dan Smith. His completion rate also sits at 70.3 per cent, ranking him first in Canada West.

Kory Nagata put up 229 all-purpose yards for UBC and scored two touchdowns on Saturday night. The third year caught a 21-yard pass from O’Connor midway through the third to put UBC up 23-13, and sealed the game with a 10-yard carry with just 1:20 left in the game. After one game, he tops the Canada West charts in yards per rush at 10.5.