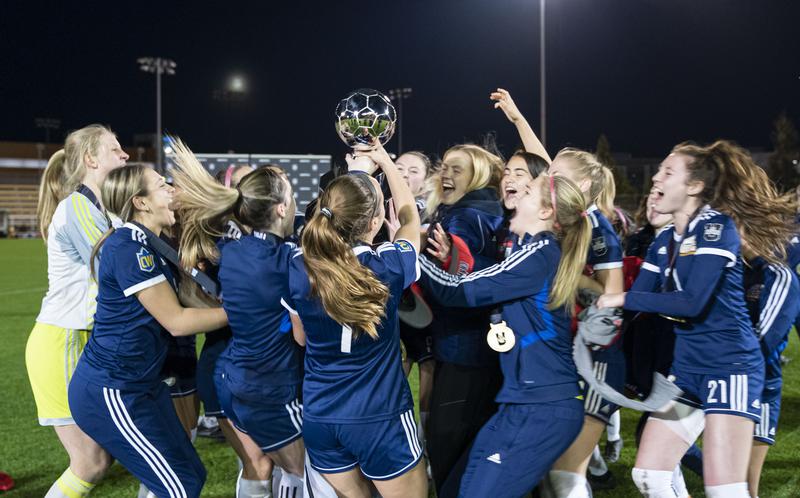 Despite missing the 2020 season due to the pandemic, the team will try to repeat this weekend as champions for the first time since 2003. Courtesy Rich Lam / UBC Thunderbirds

Danielle Steer ran hard toward the ball. A cross from her teammate landed the ball in the six yard box, and the UBC forward ran hard to the ball while the opposing players closed in.

The players surrounded Steer near the net. When Steer tried to make contact with the ball, she fell onto the turf and was taken out of the play. Yet the play was over because while Steer lay on, the turf, the opposing goalkeeper stepped off their line and the ball managed to evade the sea of jerseys. Once Steer saw the referee make the signal, she fell down onto the turf again and her teammates rushed over.

This goal gave UBC women’s soccer its seventh national championship, the most in U Sports women’s soccer history. This weekend the T-Birds return to nationals, and despite missing the 2020 season due to the pandemic, the team will try to repeat as champions for the first time since 2003.

Yet for a program that previously went a decade without winning a national championship, and failed to qualify for 2018 Canada West Final, the game-winning goal seem to turnaround a program. In May of 2020, The Ubyssey reached out to players and coaches from UBC women’s soccer team to find out more about the last goal the T-Birds scored at nationals.

The 2019 championship game pitted the T-Birds against the University of Calgary Dinos, who beat the T-Birds in a very physical Canada West Final, which saw key players leave the game due to injury.

“We actually used the Canada West final as a sort of learning opportunity,” UBC head coach Jesse Symons recalled over the phone. “That was a big turning point to understand that playing in a certain structure against Calgary was and what spaces were kind of available.” 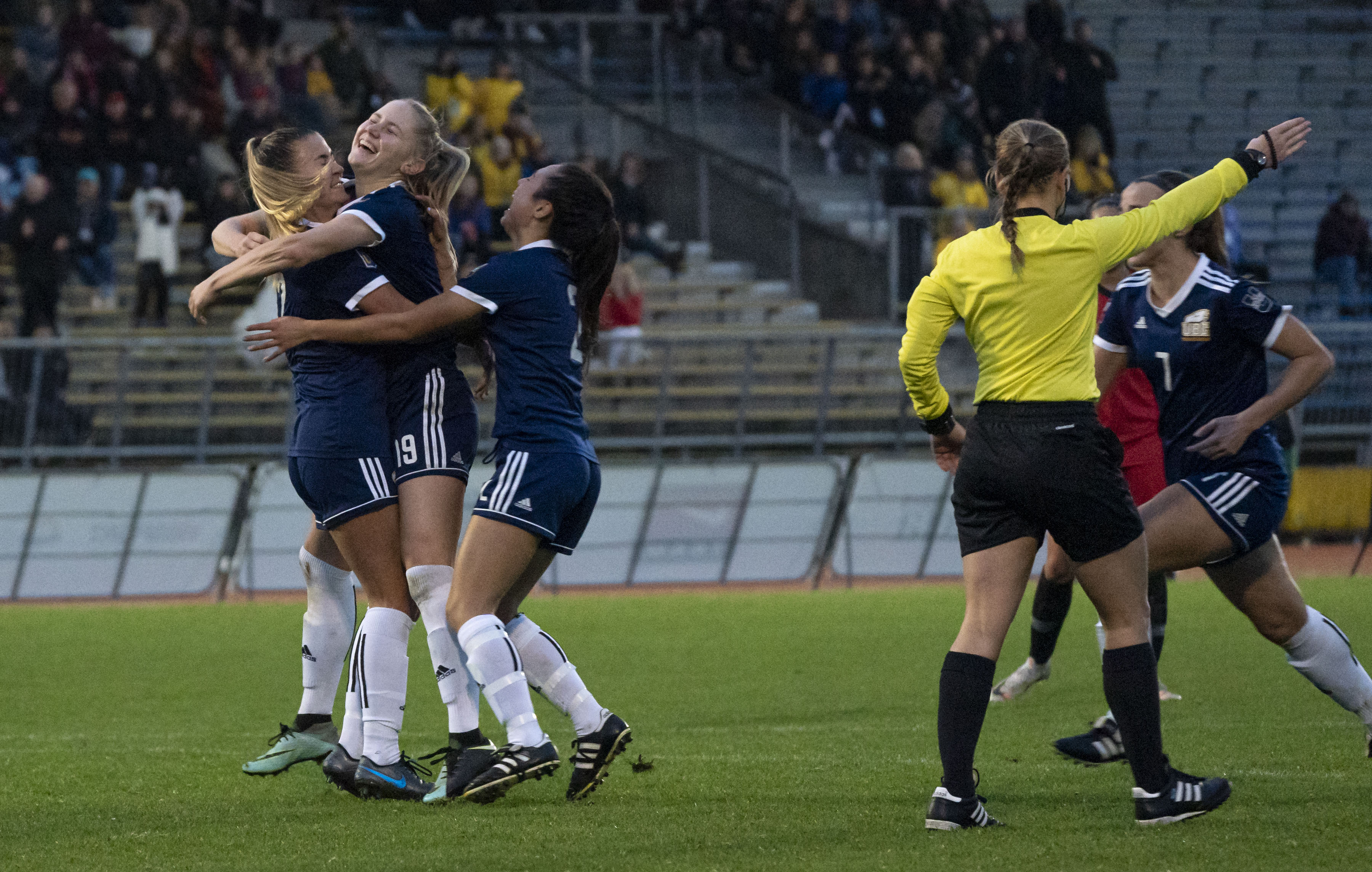 Before the championship rematch, Symons approached forward Sophie Damian. Damian, who knew Symons from her days playing at the Whitecaps elite program, switched from fullback to attacking midfielder at the start of the season after the coaches request and during warmups her coach asked another favour.

“Before the game, Jesse [Symons] watched a whole bunch of footage and was like ‘Hey, you need to get the ball into this certain spot-this is where their weakness is,’” Damian told The Ubyssey. “This is where we could really hone in and win the game.”

Symons asked Damian to practice crossing the ball into the six yard box, an available space identified during film study.

Soon after Damian started kicking balls into the box.

“I’m crossing it and I’m hitting the 18 yard box every time,” Damian said. “Jesse’s kind of like ‘Sophie is just like a cross, you can do this’ and I’m like ‘Why can’t I do this right now?’”

“[UBC defender] Sabrina [Anderson] actually, one of teammates, [said] ‘Don’t worry Sophie you’ll be able to do it. It will just come off in the game.’’’

Although a scoreless game in the first half, Damian gained possession of the ball later in the second half and attempted another cross into the box.

“[Head coach Symons] is like send[ing] the ball in,” she said. “So I cross it in, don’t hit the spot he’s talking about, which is the six, but I hit it at the 18 and then that’s when [UBC forward Natasha Klasios] headed the ball and it bounced in front of the six.”

“That was just kind of like a moment where I was like, I looked at my bench and was like ‘Holy shit! Sabrina told me I could do it and I did it!’”

With the ball at the six, forward Danielle Steer then started sprinting.

“I remember it felt like slow-motion,” Steer explained over the phone. “I could see the keeper, I could see the defenders, I already saw the ball up in the air-you can’t do anything until it’s coming down to you.” 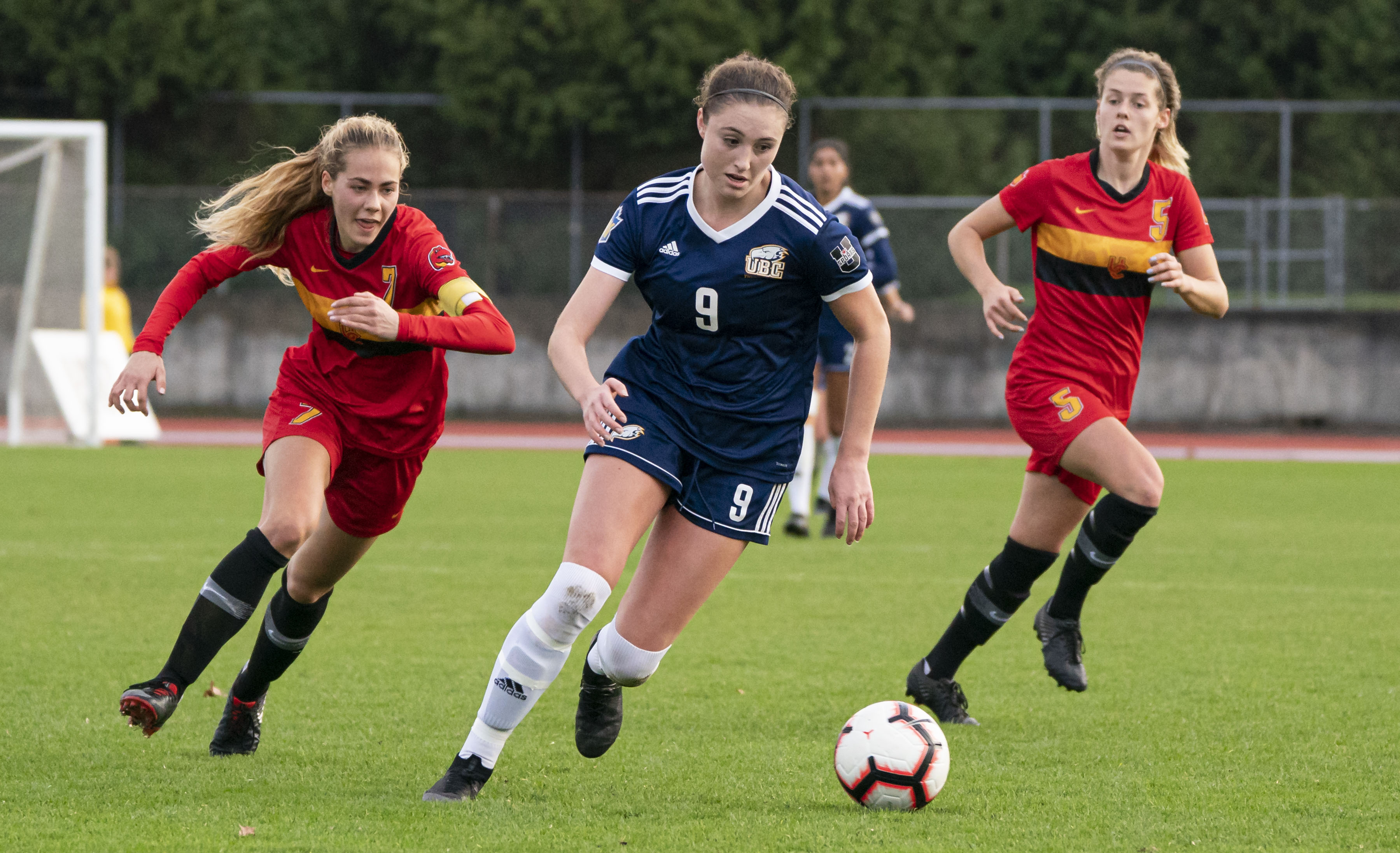 As the Calgary goalkeeper was off her line, Steer got mixed up with the Dinos defenders and ended up on the turf, watching the ball move towards the opponents net.

“I know it bounced really slowly into the net,” Steer said. “I watched the video a few times and I think I fell on my stomach because I’m trying to get something on it to go into the net. When I stood up [then] the referee called it a goal.”

While Damian and Steer could see the ball in the net, a weird series of events created confusion among the rest of the T-Birds, who were running downfield towards the Calgary net.

“When you score, a way of validating the goal is the linesman will sprint back to centre and she had slipped,” UBC forward Anisha Sangha explained.

“But then she got up and started running so then I realized it was a goal.”

Although two years removed from the championship game, Symons, Sangha, Damian and Steer remain on the T-Birds roster and will lead the team into their opening game against Acadia University with hope of reliving the same emotions they experienced that one night in November, 2019.

“When we celebrated,” Steer recalled fondly, “There were girls already crying because we knew at that point we had done it.”