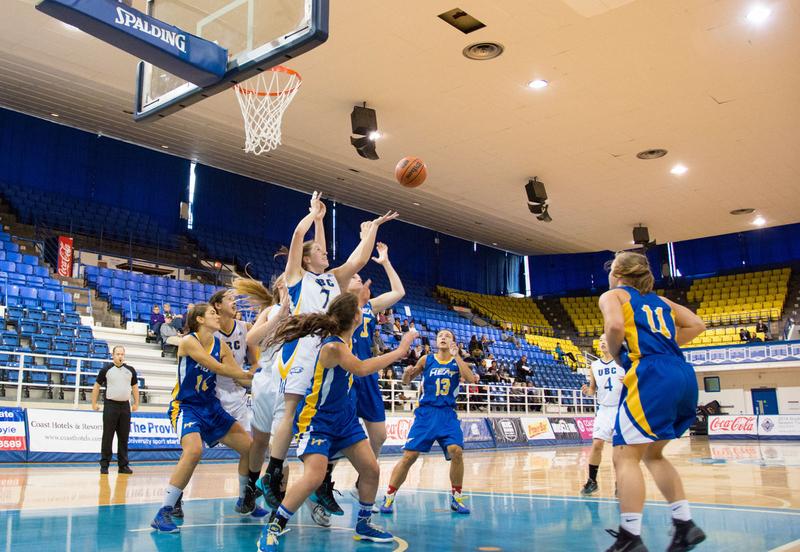 UBC women’s basketball started their season off right Friday night beating the UBC Okanagan Heat at home in the War Memorial Gym.  The Heat got the tip, but it was the Thunderbirds who scored the first basket — a three-pointer from the baseline by fifth-year Adrienne Parkin. Although the Thunderbirds were pretty successful with checking guards and stopping plays by the Heat, the rest of the quarter consisted of a lot of turn-overs and shots that just wouldn't sink.

By the second quarter, UBCO was up six points. The T-birds had to pick up their defence as both teams started playing up-court.  Freshman Jess Hanson was consistently open for passes while Parkin continued making lay-ups.  The team was still trailing the Heat 15-20 by the end of the first half but working to close the gap.

“We had a really mediocre first half,” said Head Coach Deb Huband. “We struggled offensively … but our defense was solid, not giving up many points.  In the second half, I thought our defense stayed tough and we guarded quite well and our offense got going a little better.”

It was then that the Thunderbirds began executing a series of excellent plays.  The first point of the third quarter was made by third-year Cherub Lum who was able to dribble all the way to the basket. Lum, Diana Lee and Parkin made a clean hockey assist with two quick passes and one good shot.  Parkin scored three in a row — the third time the ball was turned-over early and she went all the way to the hoop unopposed.

With one minute left in the quarter, Susan Thompson took a shot bringing the Thunderbirds into the lead. With 30 seconds left in the quarter, the Heat gained possession and managed to snag an unlikely far-out three-pointer, but the score was still 38-37. It was tight, but UBC was maintained the lead.

The T-Birds refused to fade in the final quarter. Parkin scored in the first 30 seconds followed by a three-pointer from third-year Shilpa Khanna.

“Our expectation at this time of year, with a lot of players stepping up into new roles, we really look to our veterans.  We look to our veterans for leadership to set the tone.  We expect that our fourth and fifth-year girls will be the ones that we can rely on for the intensity and execution,” said Huband.  “I thought Diana Lee did a great job with that tonight. I thought Cherub Lum did some great things, played terrific defense.  And I thought at the end of the game Kara [Spotton] came on in the fourth quarter for us.”

In the last 10 minutes of the game, senior Spotton made eight points for the Thunderbirds while Lee had several assists and shots, helping to notch the team’s lead by 12 points.  The final score was 57-45 UBC.