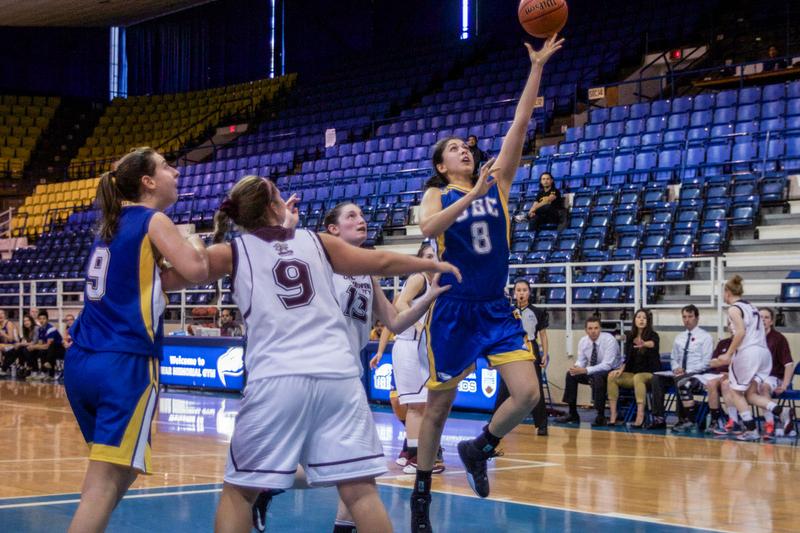 It was a bitter loss for the UBC women’s basketball team in their home opener against the University of Alberta Pandas this weekend. Although the T-Birds dominated the first half, the final score was 72-67 for Alberta.

Five minutes into the first quarter, UBC took control of the game with an assist from Diana Lee to fourth-year Kara Spotton. Spotton then took the foul shot, completing a three-point play. Cherub Lum snuck in a three-pointer at the 30 second mark, followed by another from first-year Jessica Hanson with only 10 seconds remaining in the quarter. The T-Birds came out ahead by two.

In the second quarter, UBC outstripped Alberta both defensively and offensively by making a remarkable number of turnovers and sinking their shots. There were also more three-point plays from Spotton and Lum. Adrienne Parkin scored two points with a nice move from under the basket. First-year Krysten Lindquist made her three-pointer from near the baseline. With just two seconds left, Andrea Strujic hooked in another two points for the Thunderbirds. It was a fast, high-scoring half for UBC who were then up by eight points with 41-33.

“Defensively, we were forcing them into turnovers,” said assistant coach Carrie Watts. “We were taking care of the ball. Just getting back on offence quickly and being crisp with what we were doing. We just couldn’t maintain that throughout the second half.”

UBC remained in the lead for the third quarter, but it was clear Alberta meant to close the gap. Hanson made another three-pointer, Spotton split the double defence on her and made a nice layup. But the T-Birds were pushed into defence with Alberta starting to come back hard.

Spotton made the first shot of the final quarter with only four and a half minutes to go. At this point, the T-Birds were down by 10 after Alberta took the lead by storm and UBC was fatigued. Lee managed to get them one more three-pointer. Hanson was on fire this game regardless of the score, sneaking in an additional five points for the team with only a minute and a half left in the game.

“It’s always a good battle whenever we play Alberta. We have a long history with them [and] we’ve each taken our turns," Watts said. "I think we learned a lot through our preseason games. There were a lot of positives tonight."