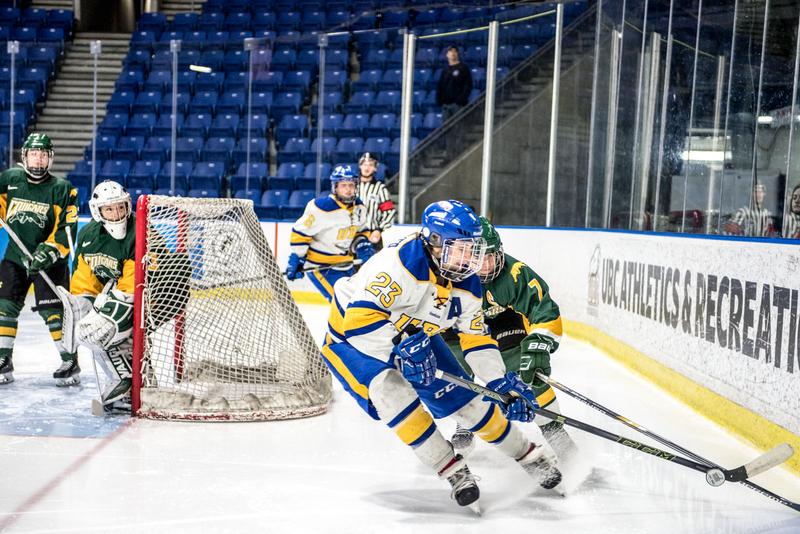 After splitting a series in Lethbridge a weekend ago, the women’s hockey team was back at Doug Mitchell Arena to take on the Regina Cougars in another two-game series. The ’Birds took Friday night’s game by a score of 3-0 before losing a heartbreaker on Saturday, 3-2.

Backed by strong goaltending, the Thunderbirds were able to earn a tally in each period on Friday night to win comfortably. Stephanie Schaupmeyer, Shiayli Toni and Rebecca Unrau scored the goals while goaltender Danielle Dube stopped all 26 Cougar shots to give her team the shutout victory.

Dube was back on her game Saturday night, stopping consecutive breakaway attempts by Regina’s Caitlin Dempsey and Jaycee Magwood late in the first period. Despite Dube’s efforts, Regina got a lucky bounce just 1:05 into the second. Following a poor giveaway by the T-Bird's defence, defender Jolene Kirkpatrick's sharp angle shot bounced off Dube’s shoulder and trickled in. It was Kirkpatrick’s first CIS goal. To UBC’s surprise, Meghan Sherven would add another tally just 22 seconds later to give her team a 2-0 lead.

The home team would answer on a power play four minutes later. Rebecca Unrau’s wrist shot was tipped in by Norwegian forward Mathea Fischer, giving the Thunderbirds some life. From there, momentum seemed to shift back to UBC’s side. At 16:18, Logan Boyd redirected Celine Tardif’s point shot past Regina goalie Toni Ross to tie the game at two.

“I was really impressed with our push back in the second when we went down two goals quickly and how we didn’t have to call a timeout. We could respond and just gain the momentum back within the period,” said head coach Graham Thomas.

Both teams pressed hard for the go-ahead goal in the final frame. For UBC, a shorthanded breakaway by Kathleen Cahoon with four minutes on the clock was turned aside by Ross. The Cougars then came back the other way on that same penalty and got a late goal from Alexis Larson to pull ahead 3-2 with just 3:35 remaining. Larson’s goal turned out to be the game winner as the ’Birds were unable to capitalize in the dying minutes.

Despite the loss, the ’Birds are still holding onto first place in the Canada West conference with 46 points. Regina and Alberta, however, are right on their doorstep with 45 and 44 points, respectively. The ladies will have to wait until next weekend for a chance to solidify a spot in the top two, which would give them a bye to the semi-finals.

“It would’ve been nice to pull ahead here,” said Thomas. “But we’ve got to battle all the way to the last weekend and I think that’s a good thing. We haven’t talked about [the playoffs] too much. As a group, we try not to focus on it. We just focus on one game at a time.”

UBC will play their final two regular season games in Manitoba next weekend. The Canada West Playoffs will begin on February 19.