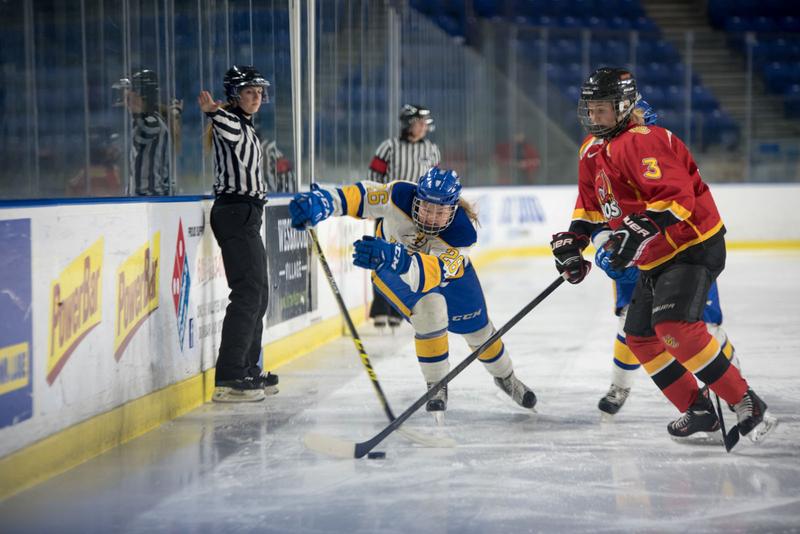 The women’s hockey team split their weekend against the University of Calgary Dinos. The Thunderbirds took the first gamemwith a score of 3-2 on Friday and fell to the same team in a double overtime 4-3.

Friday’s matchup was exciting with the Dinos opening the scoring halfway through the first period against a struggling UBC defence. The second period saw an exceptionally quick reversal with UBC coming out to score three goals within four minutes of each other. Two minutes after the start of the second, Haneet Parhar scored off of a beautiful assist from Mathea Fischer to tie the game at one. Fischer wasn’t done either. On the powerplay two minutes later, Fischer took a shot from just inside the Dinos zone, putting it past their screened goalie. Soon after Kathleen Cahoon received a breakaway pass from Nicole Saxvik and laid Dinos goalie Sarah Murray out to dry with a stunning move to put the T-Birds up 3-1. The Dinos weren’t done yet either, scoring one last time in the third period for a final result of 3-2 for the home team.

Saturday’s game was an extremely close match up. UBC scored first on a power play 10 minutes into the first period. In a scramble for a loose puck, Logan Boyd lofted the one over the Calgary netminder. Calgary responded seven minutes later, ending the first period at a 1-1 tie.

Once again it was the T-Birds that began the scoring in the second period. Kathleen Cahoon blocked a pass in the neutral zone and took it up the ice with Melissa Goodwin following. Cahoon took a strong shot on net that was saved and Goodwin capitalized on the rebound.

The Dinos responded six minutes later, putting the puck between the UBC goalie’s legs to tie it back up.

UBC mounted a three on two rush four minutes later, breaking up the ice with the puck. Celine Tardiff took it up the left wing, dishing it out to Hannah Clayton-Carroll who fed it in turn to Rebecca Unrau who put it in the net. This put UBC up 3-2 going into the third period.

Calgary tied the game off of a shot from the point halfway through the third period. After a tense end to regulation, this put the game into a five minute four-on-four overtime.

Despite being outshot 21-11, the Dinos came out strong in overtime. They maintained good puck possession, only letting UBC a couple breaks up the ice with no strong chances.

The first overtime yielded no results, meaning a second three-on-three sudden death overtime. After only scoring on one of the seven powerplays all game and outshooting the Dinos 24-14, the T-Birds were defeated 30 seconds into the second overtime. Alexandra Vafina put the puck top left corner to end the game.

This was the last game of 2015 for the UBC women’s hockey team with play resuming on January 8.