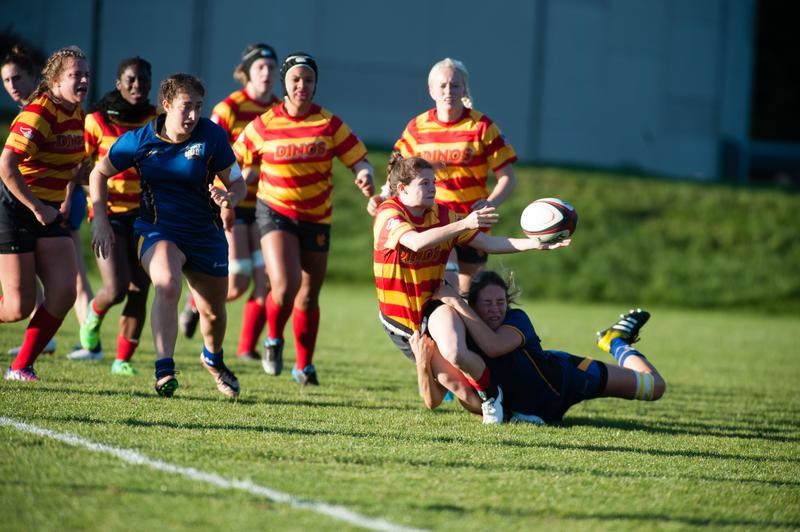 After clinching a playoff spot against the Calgary Dinos a week ago, UBC fell 44-12 at the hands of the same team on Friday afternoon.

Just like last week, Calgary sought to dominate right from the get-go and scored in the opening minutes as sophomore flanker Sarah Thomas caught the lineout for Calgary and powered her way to a try. Minutes later, fifh year Dinos veteran Temitope Ogunjimi scorched the Thunderbirds’ defence from beyond the 22-metre line to extend their lead to 10-0.

Despite giving up another score to the Dinos, UBC’s hero last week — Lyric Atchison — broke free and set up full-back Dalaney Aikens for a T-Birds try. The score midway through the first half: 17-7 Calgary.

From there, it went south for the ’Birds — Calgary scored 15 unanswered points to make it 32-7 at the half. This quick collapse was a result of UBC being overwhelmed physically and being outpaced. The Dinos were able to win the scrum and lineout consistently, setting their deep back line up to speed by UBC’s defence.

The ’Birds were able to get one back in the 45th minute after a nice 22-metre catch-and-run by centre Madi Gold. The ensuing convert was short, putting the score to 32-12. UBC wasn’t able to gain any traction from the play however, surrendering another try five minutes later to Calgary’s DaLeaka Menin — the hometeam was showcasing some fluid offloads in the process.

The wear and tear UBC sustained was finally starting to show as T-Birds forwards started to tackle high. Calgary won a subsequent lineout and took the rolling maul to the house, also converting — hammering the final nail in the coffin.

Although this was a crushing defeat for the Thunderbirds, they never gave up — even when the opponent showed no mercy. Another important note is the makeup of each team age-wise. The Dinos are made up of many fourth and fifth year students, allowing the team to play a more risky and aggressive style, knowing that they can rely on their size to win lineouts and scrums if they give up penalties.

Nevertheless, the ’Birds have some takeaways to work — most notably their speed — in order to improve moving forward.

The T-Birds will now face Lethbridge in the bronze medal Canada West game at 11 a.m. on Sunday. The Dinos, on the other hand, head to the Canada West championship to battle the University of Victoria for gold and a berth in the U Sports national championships.