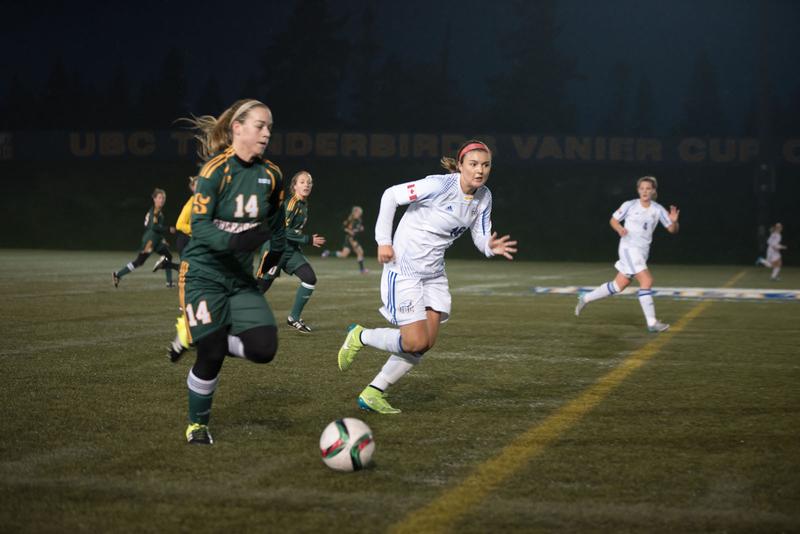 After a thrilling victory in the quarterfinals against the Calgary Dinos Thursday night, which featured a 90th minute clincher, the UBC women’s soccer team continued their quest for a national championship against the University of Sherbrooke — the runner-ups of the Quebec conference. In a hard-fought game, the ‘Birds booked their ticket to the final with an impressive 2-0 victory.

“I thought [Sherbrooke] came out focused,” said head coach Marisa Kovacs. “Last match against Calgary, I didn’t think we had our best half that first half. We knew we wanted to come out high tempo and high press and that’s what we did. I think we kind of caught them off guard a little bit.”

Pressing hard early in the first half, the Thunderbirds had their first real chance in the 19th minute. Jasmin Dhanda had a one-on-one opportunity at goal, but Sherbrooke keeper Alexandra Girouard was able to cut down the angle and stop the UBC striker’s point blank shot. Dhanda would be rewarded for her efforts shortly after. In the 22nd minute, she played a perfect pass to Amrit Berar in the middle after making a terrific run down the right side. With Girouard challenging outside the six-yard box, Berar had an empty cage to shoot at and she made no mistake, giving the ‘Birds the early lead.

UBC would double their lead in the 38th minute. Dhanda was on the doorstep to put home a rebound after Girouard saved the initial shot from Shayla Chorney.

Playing strong defensively throughout the second half, the Thunderbirds almost put the game away in the 79th minute. Nicole Sydor was able to get around Girouard, but her cross into the box was cleared away by the Sherbrooke defence. Nevertheless, UBC was able to rely on strong goalkeeping from Olivia de Goede to keep a clean sheet.

After the match, Kovacs expressed how pleased she was to be able to send the UBC women’s soccer team to the final for the first time since 2006.

“Super proud of my girls,” said Kovacs. “I’m happy about this, but our goal was to get to the final and hopefully win it. I don’t think you could write a better storyline with us and Trinity. I think that bodes well for the Canada West conference.”

The Thunderbirds will play the Trinity Western University Spartans for the CIS Championship at Thunderbird Stadium tomorrow.