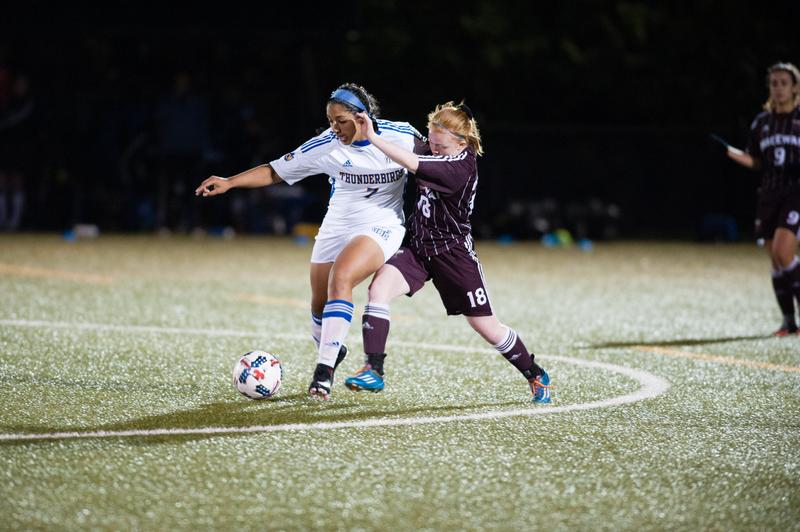 Back in Vancouver for a three-game home stand, UBC women’s soccer opened their two-game weekend set with a strong 3-0 win against the Prairie Division’s number three seeded MacEwan University Griffins on Friday night.

Early on, the ’Birds took advantage of the transition game. In the 18th minute, Thunderbird forward Danielle Steer sent the ball diagonally through the Griffins defence to striker Jasmin Dhanda who slotted it home confidently. Dhanda continues to lead Canada West with 11 goals scored — three goals separate her from runner up Kiara Kilbey from the University of Victoria.

That offensive prowess continued to show through in the 37th minute when Dhanda slipped a pass of her own behind the defence to forward Amelia Crawford who opened the lead up to two goals. Soon after, a similar play transpired again from Dhanda to Crawford, who put home her second goal of the day to solidify the Thunderbirds 3-0 lead going into the half.

“I think as a team we have a lot of quality up front. When we go at teams, we go at 100 per cent,” said head coach Jesse Symons of the T-Birds attack. “When we have speed going at teams, I think it’s difficult to defend.”

MacEwan’s struggles continued in the second, as they opened the half with a free kick by midfielder Suekiana Choucair ringing off the bar. The uphill battle only got steeper in the 49th minute when Amelia Crawford was taken down in the box and UBC earned a penalty shot. Although the ’Birds didn’t capitalize on the chance, they gained another advantage as MacEwan’s Sarah Riddle was sent off for the foul.

From there, the T-Birds held strong against the desperate Griffins team. With the final whistle, UBC added another win to their hot streak, finishing the game 3-0 up.

When asked about the upcoming match against the University of Northern BC on Sunday, Symons said the team “[looks] to regroup and try and play at the same tempo to overwhelm them a bit going forward and hopefully we have another good game where the ball goes in the net.”

The ’Birds then faced the University of Northern BC Timberwolves on Sunday afternoon, finding themselves in a 1-1 tie at the final whistle.

Though the result continues UBC’s unbeaten streak, the scoreline comes as a surprise as the Timberwolves came to Vancouver on a five-game loss streak. Shots were heavily in favour of the home side as well, at 33-3.

The ’Birds now share first place in the Pacific Division of Canada West with the University of Victoria Vikes with a record of 7-1-1.