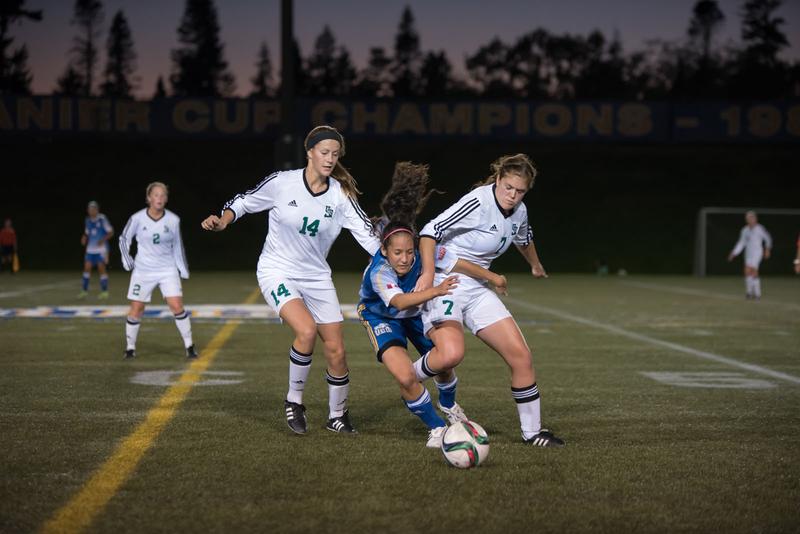 This past weekend, the UBC Thunderbird’s team defeated both the University of Regina Cougars and the University of Saskatchewan Huskies on David Sidoo field. They left the Cougars out in the cold with a 3-0 shutout and then battled to get a 4-1 win over the Huskies.

Earlier last week, the UBC athletics' headline described the Thunderbird women’s soccer team as "red-hot." Coming off yet another back-to-back victory with a six game winning streak and an 8-1 season record, the T-Birds are catching fire. The latest wins solidify the ‘Birds' lead in the conference with 24 points putting them five points ahead of their closest Pacific Division contenders — the University of Victoria Vikes.

On Friday, The T-Birds started the game strong going all out in the first half and scoring three goals against the cougars. Fourth-year Amirit Berar scored a penalty in the 11th minute and, in the 43rd, Nanaimo native Krista Whittaker scored a header for her first goal of the season. Midfielder Madison Guy put another goal in the net in the dying moments of the first half for the last goal of the game. The rest of the game was riddled with fouls and desperate shots from both teams as the Cougars fought hard to raise the score — but the ‘Birds held them back.

The following day, the Thunderbirds took on the Saskatchewan Huskies who were leading the Prairie Division going into the match. After a Huskies own goal in the 39th, forward Jasmine Dhanda scored a penalty 10 minutes later and then assisted Berar with a well-timed pass through the Huskies defence in the 69th minute. The Huskies pushed back in 89th minute with a goal from attacker Leesa Eggum and for a moment it looked like the Huskies could pull through and come back. But then, after a scramble for the ball in the box, T-Bird midfielder Reetu Johal passed to rookie Amelia Crawford who calmly fired the ball into the goal finalizing their win. 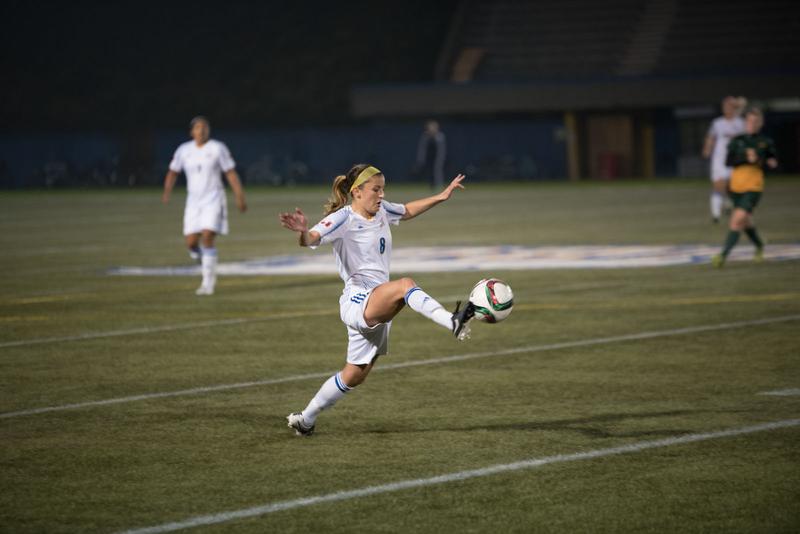 “[I'm] happy about the results, happy about how we played, [but] just disappointed in letting that one goal in especially with five minutes to play,” said Head Coach Marisa Kovacs.

“We need to learn to manage the game and understand what we need in the appropriate times. At the end of the match, we need to make sure we are keeping possession and getting it out of our defence.”

The T-Birds dominated the Huskies for most of the game by nearly 16 shots with 10 on goal compared to Saskatchewan’s nine with four on target.

Both teams were fighting to keep their streak up and hold their position at the top of their respective leagues. The game took a more aggressive turn in the second half with harder tackles and intense jostles.

“It think most games in soccer it is going to be a grind. It is going to be a battle. Today was no different,” said Kovacs. “We were out there battling for our seating right to make the Canada West playoffs. And so were they.”

“I think Olivia has stepped up huge for us. She had a great season and summer training. Came off big off the bench starting with Trinity Western and had a huge day for us to keep us up in that game and she’s just used that momentum throughout.”

The T-Birds latest successes have all come with a considerable amount of injuries in the squad this season as well as fatigue from several of their games spent on the road. Kovacs believes the team really stepped up and filled out the openings. Apparent examples are first year Megan Douglas who played fullback and Crawford who scored the fourth and final goal against the Huskies.

It is safe to say that the ‘Birds have settled into place as Canada West Division leaders — but this could prove to be fatal.

The T-Birds made some key errors in the game against the Huskies allowing for more turnovers than anyone would like and failed to clear the ball from their box whilst it was teeming with Saskatchewan attackers. Eventually, the ‘Birds took the ball out where it mattered and managed to hold the score in their favor. However, one can only wonder how long they can burn brightly before they fizzle out.

Next week the team will be facing off against the second place University of Victoria Vikes.

“I know they're going to be ready to take it to us because, when we played them at home, we got the result on that one,” Kovacs said. “They’ve been on a roll lately. I think, same as us, they’ve got a few wins in a row and they’re playing well. It is going to be a battle ... I think my girls will be up for it.”