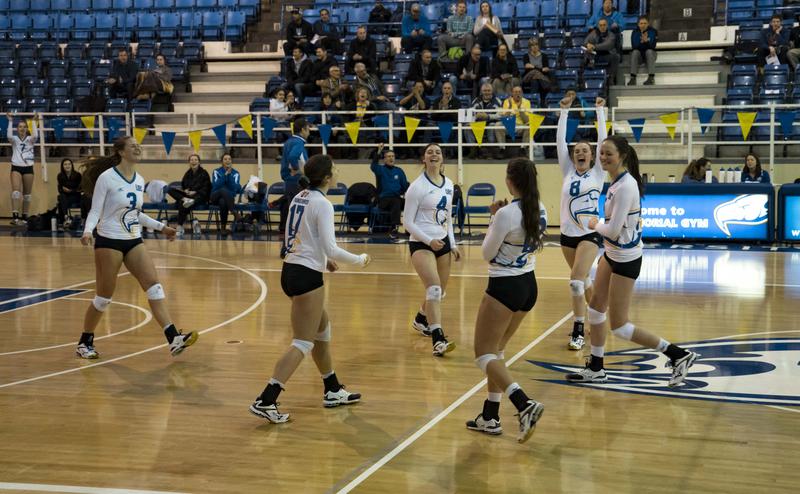 UBC stunned the number one seed Trinity Western Spartans in a five set thriller on Friday afternoon in Edmonton — putting them into the national quarterfinals with a 3-2 win.

It was a stellar overall performance for the Thunderbirds, who played in a non-traditional opening game against a familiar foe.

“You don’t win a match like that against a deserving number one seed unless everyone comes to play well and do their roll and do their job," UBC head coach Doug Reimer said post-game on the U Sports broadcast.

The early sets were plagued with unforced errors on both sides of the net, but the ’Birds would grind out the victory after being up 2-0 early. Fifth-year libero Sam Patko also took home player of the match in the tournaments opening game.

The first set began in close fashion as UBC dropped the first two points but were able to rally the next four straight. The ’Birds took advantage of less organized points but continually made unforced errors and looked nervous in the first set. As the game continued, the Thunderbirds calmed down and found their stride. Trinity would miss the final serve of the set, handing it to the ’Birds 25-23.

The second set opened with a mass of exchanged points, though UBC failed to spread the block of Trinity early and were having trouble finding the floor on Trinity’s side of the net. Getting closer to the midpoint of the set, UBC began to find their blocking stride, knotting the set at 13 apiece. The Spartans then made three points straight to go up 21-18, as UBC made a few unforced errors. Both teams had been taking advantage of the outside attacks but had little play up the middle. The 'Birds would tie it up at 23, 24 then 25 down the home stretch, but would eventually go up one on with a kill up the middle. The Spartans would cross the centre line on the final point, handing the second set to UBC 27-25 and putting the T-Birds up 2-0.

Opening the third, Trinity set the fast pace by going up 4-1, though UBC brought it to 5-4. Midway into the set, Kiera Van Ryk would land the first and second aces of the day back-to-back, reinvigorating the Thunderbirds squad. The ’Birds would score 3 straight late in the set to tie it at 23. However, the straight set victory was not meant to be as Trinity would take the last two points convincingly and end the third 25-23.

The fourth set continued the trend of tight play as neither team could find a particular advantage — no more than a 2-point spread was seen until Trinity went up by three into the technical timeout. The ’Birds continued to fight, tying the game at 19 and giving no room for either teams' fans to breathe. Tied again at 23 each, the Spartans would bring up match point after an extended rally and fantastic defensive play by both teams. UBC's Victoria Behie would miss the last point wide, giving the Spartans the fourth set 25-23 and forcing a fifth and decider.

The final set opened with the 'Birds going up 4-1 early. The T-Birds continued to barely hold off Trinity with one and two point leads. The Spartans would eventually tie the game at 14 for a tough end to the set, but the ’Birds would get a huge dig from Patko on the next point giving them the advantage. From there, who else but Van Ryk would smash the final point for UBC — taking the final set 16-14 and the match 3-2.

Van Ryk would cause problems for the Spartans defense all game, hitting an unbelievable 32 kills in the match. However, the U Sports player of the year did give up 6 serving errors.

UBC will now have to wait to see who they play tomorrow in the semifinal tomorrow. They will place between first and fourth in the tournament, given today's win.