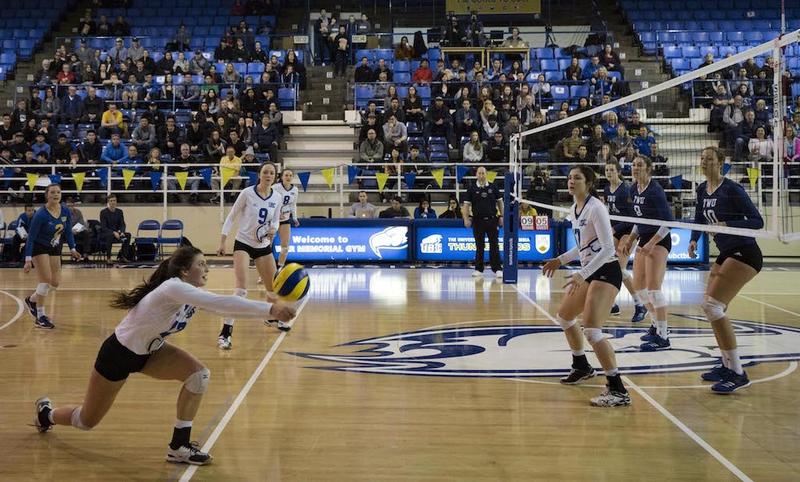 The second game of the weekend was another close affair, but UBC used the momentum from their dominant second set to get the 3-1 win.

Left side Kiera Van Ryk opened up the first set with a kill for the Thunderbirds, which was followed by lengthy rallies that saw the Spartans and the T-Birds exchange the upper-hand. UBC eventually fell behind halfway through the set and although they tried to close the gap, the Spartans took the first 25-21.

The Thunderbirds controlled the second set from the beginning, which featured right side Olivia Furlan making four aces in a row, as part of 11 straight points for UBC. The streak allowed the T-Birds to pull away from the Spartans and take the set 25-13, with outside hitter Victoria Behie making the kill on the set point.

The third set was much closer as the T-Birds and Spartans traded points back and forth for most of the set. Furlan continued to earn points for UBC, and Trinity’s outside hitter Hilary Howe earned a number of kills for the Spartans. The Thunderbirds took this set with a narrow lead at 25-22.

The fourth and final set was also close, and saw UBC use their outside hitters to earn points. On defense, effective blocks from the ’Birds were essential in holding their advantage. The Thunderbirds pulled away with the set and middle Gabrielle Attieh earned the kill on the set point. UBC took the set 25-18.

Both the Thunderbirds and the Spartans have clinched spots in the upcoming playoffs and the teams are close in the standings, which made UBC’s two wins this weekend even sweeter.

“I was pretty happy to see just how we adapted to things and pushed through,” UBC head coach Doug Reimer said after Saturday’s game.

Reimer also called the game “mental training, because you have to stay engaged and aware all the time,” in terms of preparing for the playoffs.

The Thunderbirds will play two more home games next weekend before the playoffs, facing off against the Saskatchewan Huskies on February 16 and 17.