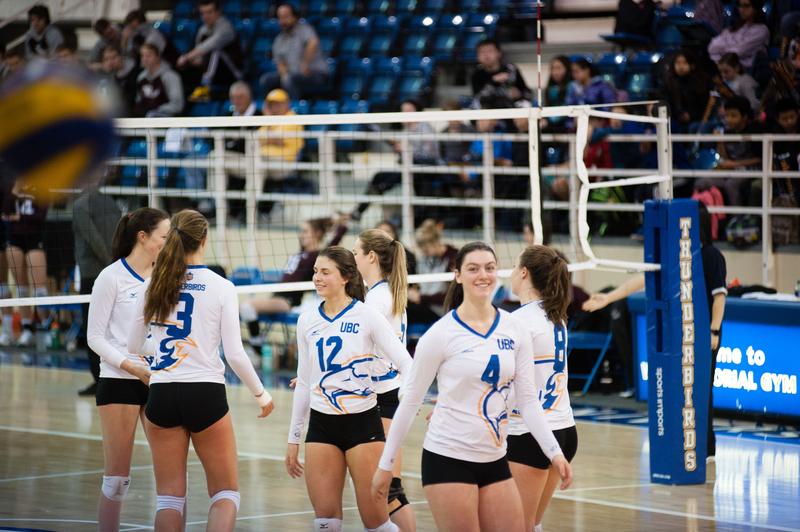 UBC sets up for a serve. Lucy Fox

In front of a crowd of potential future Thunderbirds, the women’s volleyball team duked it out against the MacEwan Griffins at War Memorial Gym on Friday afternoon.

UBC would come out on top in the end, winning three sets to one in the first of two matches against the Alberta side.

The game was a different experience for the T-Birds as they played host to stands full of local elementary school students, bringing in an overwhelming amount of UBC pride that MacEwan wouldn’t be able to rise against.

“It was definitely a different atmosphere that we’re not used to, having a lot of kids here screaming their heads off — it’s amazing for a lot of us,” UBC rookie Kiera Van Ryk said about the fans.

In the first set, the ’Birds’ looked to exploit the angles from outside edges but had less success down the middle of the court. The Griffins took advantage of quick passes on several occasions, but had a lack of blocking success which resulted in the ’Birds taking the set 25-21.

In the second set, UBC opened with a flurry of miscues and were left looking at a six-point deficit. Though UBC rallied back to tie it up at 13-13, the two teams traded points back and fourth tying at the 20, 24 and 28 point marks. UBC would eventually have three spikes blocked in a row, resulting in a 30-28 dropped set.

The Thunderbirds came out stronger in the third set, responding in the opening seconds with a three-point run. For the rest of the set, UBC would never concede the lead and had exceptional coverage behind the front line, as a frustrated MacEwan offence tried time after time to drop the ball just over the ’Birds’ block attempts. UBC closed the set with a dominating 25-13 response.

In the fourth, MacEwan came out looking reinvigorated, trying to push for a fifth set. As UBC looked to close out the match, MacEwan fought off four match points in a row but to no avail. In the end, the Thunderbirds would close out the set 28-26 and take the first of their two matches this weekend.

UBC rookie Keira Van Ryk looked like a seasoned veteran as a stand out on offence, notching a massive 24 kills for the home side.

“I think we dipped a little bit in some of the sets, but we came back and we played as a team together to get through those rough points in the game,” Van Ryk said of the afternoon match.

On defence, it was a different story for the ’Birds.

“We were sloppy at times where I think we could’ve had some better control on some things and we didn’t do a good enough job of taking away some of the things that we knew they would bring, so I’m a little disappointed on that — on the blocking defensive side of things,” UBC head coach Doug Reimer said. “For example, after two sets, they only made two hitting errors … but some of that was on us and our ability to defend better.”

That said, Reimer credited Sam Patko for her defensive play in the game, as she earned 15 digs throughout the four sets.

“I don’t think they scored into position five, into her zone,” Reimer said.

Going into tomorrow’s match against the Griffins, the ’Birds will look to exploit more of the middle of court as their outside game effectively opened up the middle for the later sets on Friday afternoon.

“I think we should be able to run middle more consistently … than we did,” Reimer said.

The T-Birds face off against MacEwan again tomorrow night at 5 p.m. at War Memorial Gym.