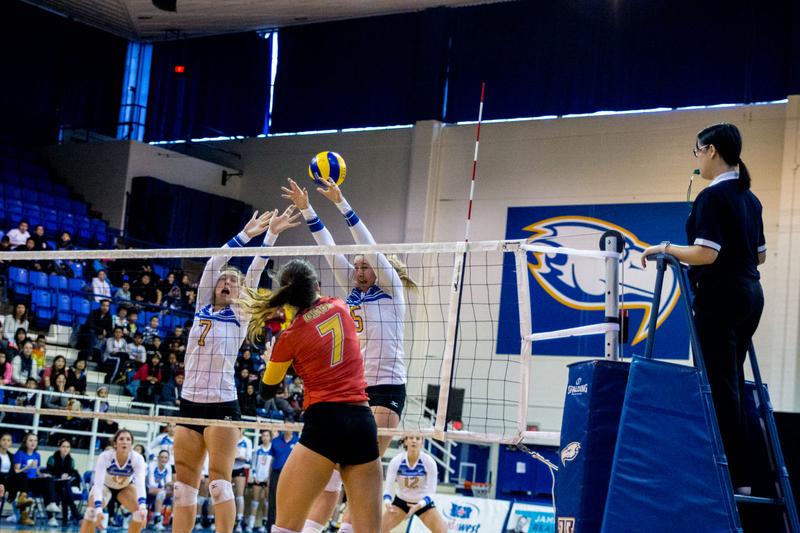 UBC beat the Calgary Dinos 3-1 on both days.

This weekend at the War Memorial Gym, the UBC women’s volleyball team defeated the University of Calgary Dinos in two, four-set games 3-1 on both Friday and Saturday.  The wins are the latest in the ‘Birds return as Canada West regular season contenders. The Thunderbirds are currently first and tied at 12 points with Trinity Western University and University of Alberta.

This time last season, both UBC and Calgary were closely matched with similar records at 5-3 and 4-4 respectively. By the end of the 2014-2015 season, UBC was ranked lower on the CIS Top 10 than Calgary. However in this match up, the ‘Birds succeeded in edging out the Dinos for their fifth and sixth wins of this season.

This is considerably better than last season’s performance, which saw the T-Bird’s record riddled with upsets to less formidable teams and drawn out losses to the better teams. Head coach Doug Reimer is proud of his team’s performance this weekend.

“We had some strong serving at key times. And I think our overall execution was solid offensively and improving defensively,” said Reimer, who led the T-Birds to six consecutive nationals between 2008 and 2013.

On Friday, the Thunderbirds took the game in four sets, pushing their winning streak to five games. Set scores were 25-23, 25-16, 19-25 and 25-22. Outside hitters Danielle Brisebois and Laura MacTaggart led the game on attack with 19 and 16 total kills, respectively. Fifth year Alissa Coulter also showed up in this game with 10 kills and three aces.

Both teams started the opening set by attacking hard. Attack errors and kills riddled the start of the opening set. Both teams were then on par for most of the game, all the way to 19-19.  A four-point surge then pushed the Thunderbirds ahead of the Dinos at 23-19, followed by three points from the Dinos to put them within a point of the ‘Birds. A ‘Birds' kill from Coulter ended the set at 25-23.

The second set was by far the T-Birds' best set of the weekend. They sped ahead with seven of the initial nine points and soon had doubled the Dinos score at 14-7. Calgary tried to make runs of their own, getting as close as 15-12. However, the T-Birds again ran away with the score and a final kill from Danielle Brisebois took the set at 25-16.

The T-Bird’s best set of the weekend was soon followed with its worst. The Dinos got an early three-point lead on the ‘Birds and then extended that lead to 6-2. The Thunderbirds attempted to come back and stay in the game, but the Dinos left the ‘Birds in the dust. The Thunderbirds recovered late, going on a three-point streak to bring the score to 20-17, but it was too late. The Dinos pushed ahead getting to set point at 24-17 and then took the set at 25-19.

“I think we had a bit of a let down to start and [I] give Calgary credit for raising their game. We didn't serve and pass as well and they raised their intensity level," Reimer said about the set.

Friday night’s fourth and last set was the Thunderbird’s chance to bounce back and end the game quick, which they did. It was hotly contested as the Thunderbirds refused to fall back and the Dinos tried to improve their conference record.  The ‘Birds and the Dinos matched each other point for point. The Dinos then made a four point run to lead the ‘Birds by three points at 14-11. To this, the ‘Birds replied with a run of their own, scoring nine out of the next 10 points which put them over the Dinos at 21-17. The Birds slowed for a bit, but they managed to finish the game with set point at 25-22.

On Saturday, the Calgary Dinos played harder and at some points looked like they could come back, but the T-Birds beat them sound at 3-1 with set scores at 25-20, 26-28, 25-23 and 25-22. In this game, the Dinos threatened to draw out the game to a fifth set again, but the ‘Birds rose to the occasion and swiftly squashed the Dinos in the fourth.

In the first set, every point the T-Birds made, the Dinos followed with a successful attack of their own. The ‘Birds were ahead at 6-5 when the Dinos went on a three point spree and leaped ahead of the T-Birds at 8-6.  The ‘Birds came back and took the lead again at 11-10, but then another three point jump by the Dinos put them two points ahead of the ‘Birds at 13-11. Calgary held that lead for a while thanks to kills from Calgary middle Beth Vinnell and outside hitter Laura McManes.

Amazing Thunderbird teamwork after a substitution saw the ‘Birds bounce back five points and surge well ahead of the visitors to 22-18 and then hold off the Dinos until set point at 25-20.

The second set went to the Dinos, despite a great early performance by the ‘Birds as mistakes and errors dragged the T-Birds down. A four-point run pulled the T-Birds from a stale mate and pushed them to a lead at 8-3. Calgary had a run of their own, taking six of the next seven points which put themselves back in the game at 9-9. Another four point run by the T-Birds was cancelled out by the Dinos in the dying moments of the set as they scored eight out of the next nine points, putting themselves well ahead of the T-Birds at 22-20.

The ‘Birds battled hard and caught up with the Dinos at 25-25. At this point, the game could have gone any way and the ‘Birds looked poised to take it. However, a service error followed by two kills by Calgary’s Vinnell finished off the set as a Dino’s victory.

The Dinos tried to ride this momentum into the third set, looking to salvage one game from the back-to-back matchup. However, the Thunderbirds followed the Dinos closely the entire set. A kill by setter Alessandra Gentile and a block by T-Bird middle Nicola Laniuk cemented the T-Bird victory at 25-23.

Calgary opened the fourth set strong, scoring six points out of the first seven points.  Their five point lead faltered and the ‘Birds caught up with them at 9-8. Several runs by the Dinos threatened again to leave the ‘Birds in the dust, but the 'Birds snapped wildly on their tail. At 22-17, there was a possibility that the Dinos could take the entire game. Suddenly the T-Birds surged forward with an eight-point run, overtaking the Dinos and sealing the set at 25-22.

Reimer said he was “very pleased with the two wins and the contributions from so many players.”

“We need to maintain our health through the next three weeks and stay fresh, but work to compete hard every match," Reimer said about the next few weeks in which the T-Birds will face off against the University of Winnipeg Wesmen and the Mount Royal University Cougars.

“Winnipeg is a good defensive team and has a great attacker. We will have to be patient and use our depth,” said Reimer, who is in his 18th season as the Thunderbird head coach.

The UBC Thunderbirds will spend this weekend on the road, playing the University of Winnipeg Wesmen on their home turf November 13 and 14.