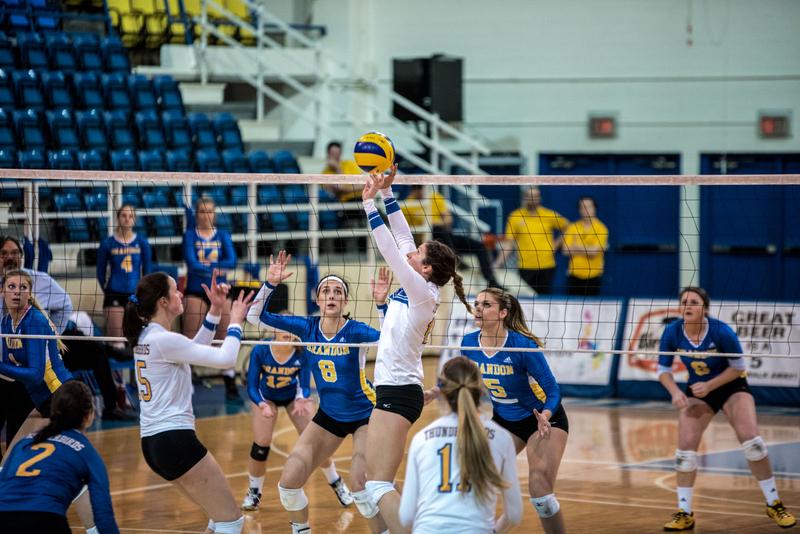 UBC couldn't connect against Brandon, falling on Friday and Saturday.

This weekend, the women’s volleyball team faced off against the Brandon University Bobcats and suffered two devastating losses to the visitors. The Bobcats, despite a woeful 6-9 conference record and being 10 points behind the ’Birds, defeated UBC 1-3 on Friday and 0-3 on Saturday.

This time last season, Brandon won a drawn out Friday game in five sets and the T-Birds took the following day in three. With the Thunderbirds boasting an 11-1 record halfway through this season — already by far better than their previous year — the team looked poised to roll over the Bobcats and continue on their quest to the Canada West playoffs.

On Friday night, the Thunderbirds lost in four sets with set scores at 25-16, 15-25, 25-27 and 22-25. The ’Birds seemed to be on track to take the weekend with a thunderous first set, but dropped the ball, losing the next set by 10 points. The night went downhill from there.

Sharp shooter Danielle Brisebois, who made 20 kills in the T-Birds’ last game, was visibly absent from the half-court and Juliana Kaufmanis played less than usual due to an ankle sprain. The Thunderbirds also enjoyed a restful bye week, making these their first games in six weeks. All of this, as well as Brandon’s consistent play and brilliant defensive digs from Bobcat’s libero Donata Huebert, led to the slow but sure defeat of the T-Birds.

“[Brandon] played free and we didn’t. We got tighter and we just struggled to get any sense of flow going offensively or defensively,” said head coach Doug Reimer.

Despite that, the ’Birds still held up well. Alessandra Gentile racked up 44 assists the first night and Samantha Patko made about half of the Thunderbirds total kills that night along with 25 digs. Second years Victoria Behie and Laura MacTaggart soared with 14 and 12 kills respectively, and veteran hitter Alissa Coulter was not far behind with 11.

“I think the first thing we have to do is just regroup after not playing well here. There’s no magic to any of that,” said Reimer.

In the second game, the T-Birds faltered again with set scores at 22-25, 15-25 and 12-25. The Bobcats increased their lead in each set by putting the T-Birds on the defence with a barrage of menacing attacks. The ’Birds attacking leaders of the previous night, Behie and MacTaggart, only managed to total five and nine kills respectively. Gentile went from 44 assists the previous night to a meagre 19 on Saturday. By the end, the Bobcats had more than doubled the ’Birds on aces and had produced less errors in the entire game.

“We’ve got to rebuild some belief in what we were doing before Christmas,” said Reimer, referring to their 11-1 conference record before the break.

UBC is fourth in the conference as the closest pursuer, Thompson Rivers University, sits eight points behind them. The ’Birds have yet to meet the Canada West big leagues like the University of Alberta and the Trinity Western Spartans. They also have yet to face off against UBC's sister school — the UBC Okanagan Heat — who are tied for first.