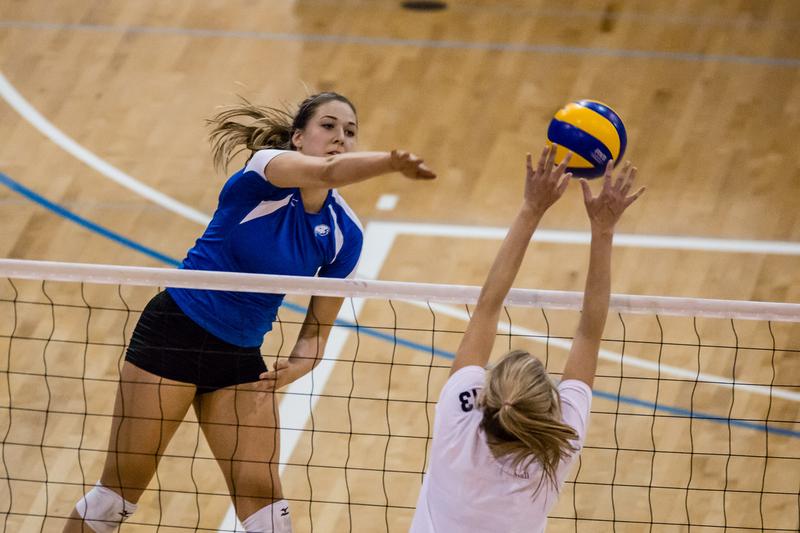 The Thunderbirds were able to start the new year successfully against the UBC Okanagan Heat (UBCO), and overtake them on the conference standings with back-to-back victories which consisted of a 3-0 win on Friday and a 3-1 win on Saturday.

Compared to last season where they rampaged through the season — with an 11-1 record at this point in 2016 — the ’Birds seemed to have some room for improvement with a 7-3 record this year.

Facing a higher ranked UBCO on Friday night, the solid-looking T-Birds were able to cruise to a comfortable three-set victory with set scores at 25-19, 25-19 and 25-16. The T-Birds looked unbeatable throughout the night.

“I wouldn’t call it revenge. It's more just to know they are a strong program ahead of us in the standings, so it’s a big win,” said UBC head coach Doug Reimer in reference to losing to the Heat in the previous season’s playoffs.

A strong start was crucial for both teams and UBC was able to get the upper hand on some brilliant exchanges against UBCO early on in the match. Fourth-year middle Maggie Li showed great presence with a number of blocks and kills throughout the first set.

The ’Birds seemed to be closing in on the first set, going up 18-10 and after a couple of kills from left side Danielle Brisebois, the T-Birds reached set point at 24-14. However, the ’Birds couldn’t handle the pressure well enough, as they dropped five straight points before eventually taking the set 25-19.

The Thunderbirds’ start to the second set was nothing less than overwhelming. Their momentum from the first set was carried on and they began the set 6-0, including two-straight service aces by third-year middle Ciara Hanly.

The momentum did not carry on for long though. Neither team was able to get a clear grasp of the game and at one point, the teams traded four service errors within a span of five points. The Thunderbirds eventually regained momentum later in the set, after a point in which fourth-year setter Alessandra Gentile pulled off an unbelievable one-armed dig to set up a clean kill for right side Juliana Kaufamanis. UBC took the set 25-19.

Similar to the second set, the Thunderbirds raced off to a six-point lead in which a brace of blocks forced the Heat into a timeout. The third set was fairly straightforward onwards, as Brisebois earned seven of her game-leading 15 kills of the match. The match finished with the final set score of 25-16 on a service miss by the Heat’s Aidan Lea.

“I was very pleased with the level of skill and execution our team showed, [as well as] the level of execution and good composure when UBCO was coming back,” said Reimer as he reflected on the game.

The ’Birds came back on Saturday night and did it all again, beating the Kelowna team in four sets.

Following the wins, the Thunderbirds currently sit at third place in the conference, only behind powerhouses of the University of Alberta Pandas and Trinity Western University Spartans. With back-to-back wins against their rivals, UBC looks confident heading into the second half of the season.

The T-Birds will be facing off against the University of Manitoba Bisons on Friday, January 13 and Saturday, January 14 in Winnipeg, Manitoba.