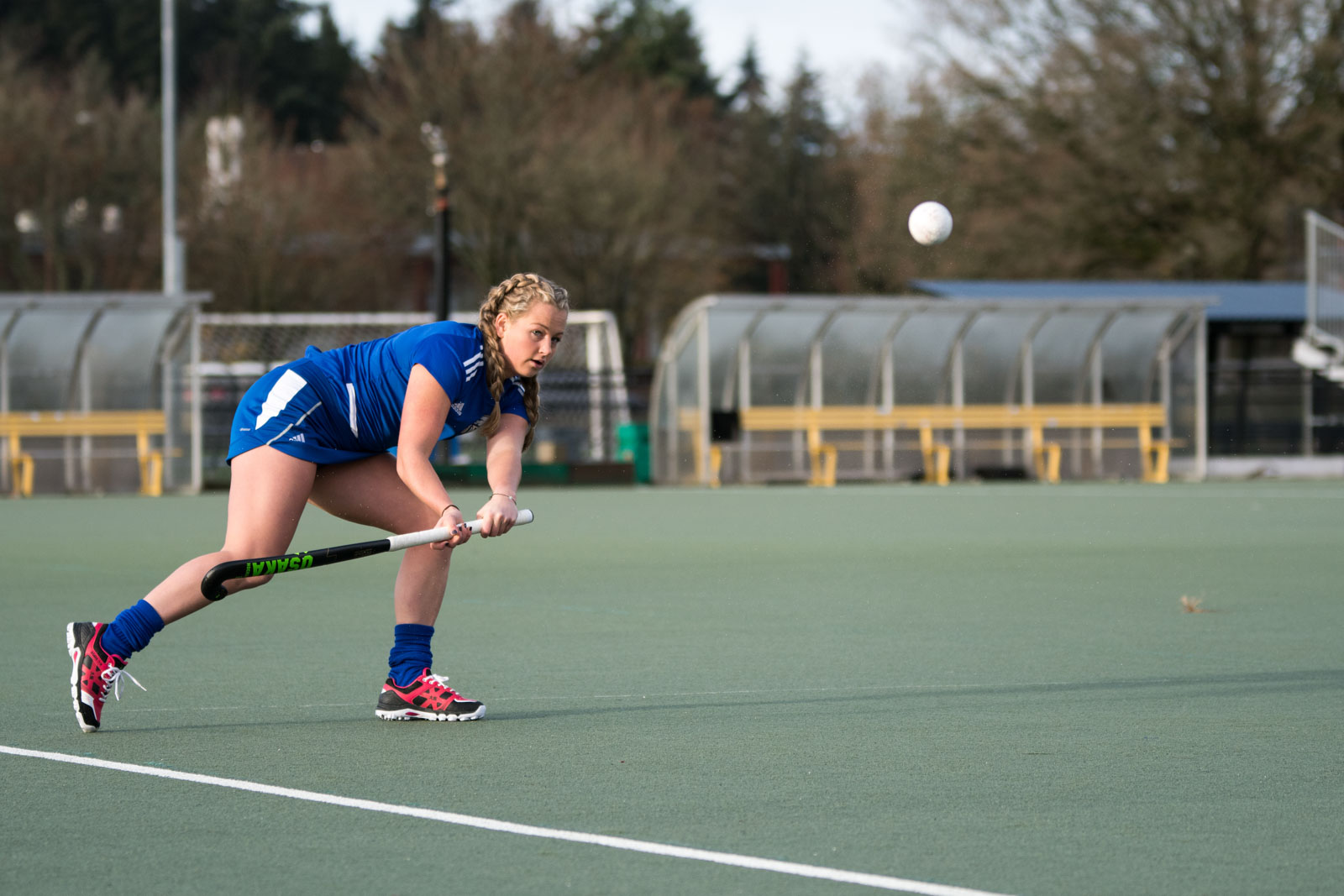 Words by ’Birds: Sixth in the 6ix and finding home at UBC

Stephanie Norlander is a fourth-year UBC student who transferred from the University of Iowa. She was also named a Canada West all-star along with UBC and national team teammate Hannah Haughn. The women's field hockey team won their sixth national championship on Sunday, November 6 in Toronto, ON.

Six was a lucky number that day

There we were, lined up against our Canada West rivals — the University of Victoria Vikes — for what became a battle of blood, sweat and tears that went beyond the final whistle. The first half seems like a blur. It was physical, as expected, but things were going okay. We had chances and they had chances, but no one could put the ball in the net.

Ten minutes into the second half, they scored. The Vikes were up 1-0.

The amazing thing? We didn’t get down on ourselves and we didn’t get frantic. The trust we had in each other, in our coaches and in our game plan was clearly evident. The game went on and the clock ticked down.

Finally, with about eight minutes left to play, we earn a penalty corner. For those unfamiliar with the game, a corner is a set piece and an attacking opportunity that can often lead to a goal. So this was it. We all knew it was our opportunity to capitalize and score the tying goal.

Our coach made the call. A 2C — a play we had practiced and executed hundreds of times at training. Gabby Jayme, all-star tipper and all around awesome teammate, was up to take it.

She nailed it. Duh.

Running back to the halfway line I was thinking, “This is it. A tie game — we’ve got the momentum and there are eight minutes left. Let’s go win this national championship!”

So we battled it out for eight more minutes and let me tell you, there were opportunities. I hit the post but we just couldn’t put it away. The whistle blew. We were headed to a shootout.

So there I was, arms linked with my teammates, yelling, “Let's go Gabby, you got this!” with fingers crossed for what happened next. Saved! Our goalie, Gabby Switzer — player of the game and Canada West goalkeeper of the year — had just won us our national championship.

Going through my mind —“She saved it! We did it, we won! Ruuun *dogpile*.” Shoutout to goalkeeper Gabby Switzer. She is awesome. 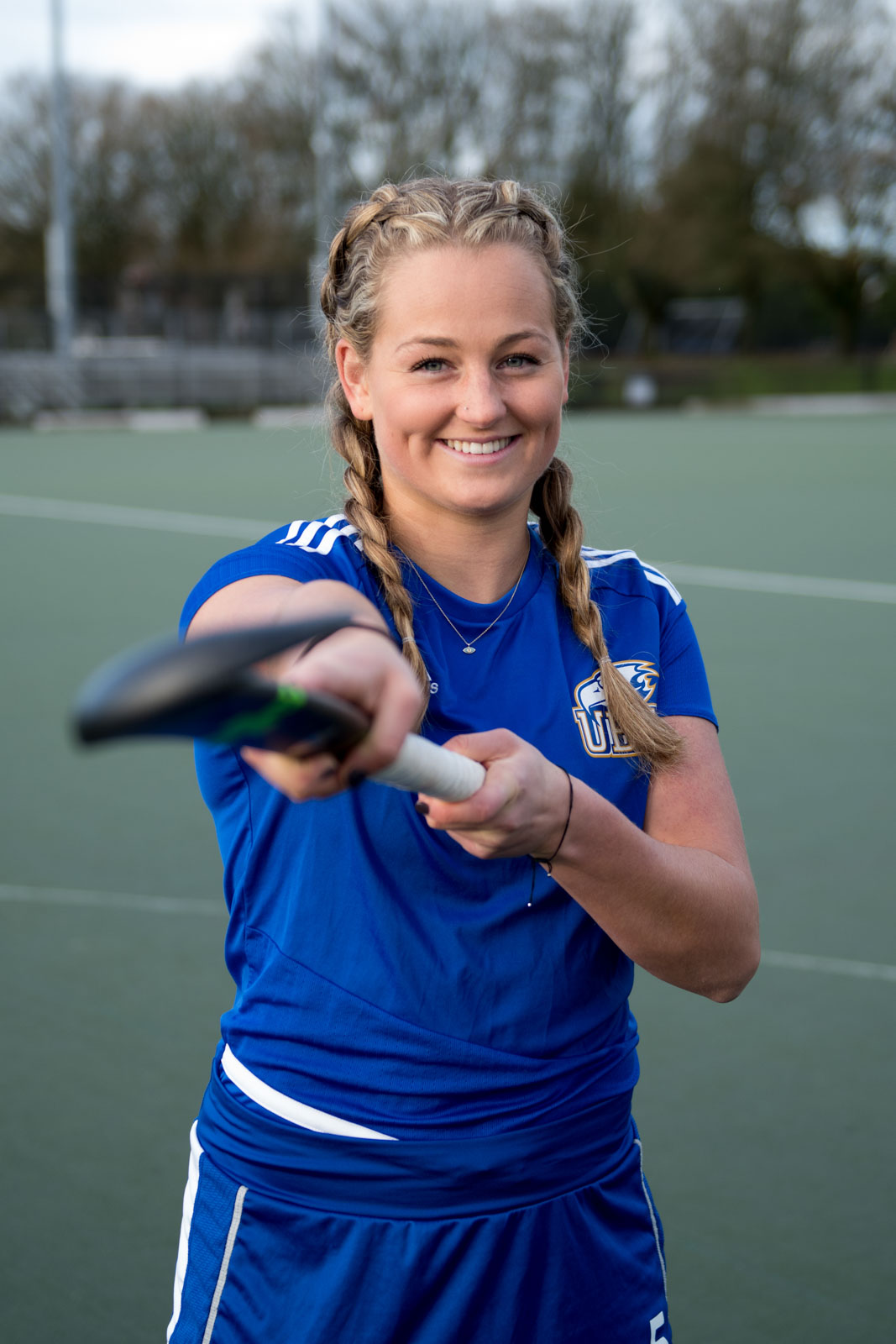 Let me take you back to the beginning of this championship journey and tell you a bit about my story of joining this amazing team. This was my first semester at UBC. I am a transfer student from the University of Iowa, where I played three seasons on a full-ride scholarship. I want to tell you it was awesome and all that, but something was just missing.

Don’t get me wrong, it was an incredible experience down there that I am so glad to have been a part of. Playing field hockey at an NCAA Division I school, not to mention in the Big Ten conference, is something significant in and of itself. The perks we got were endless — more clothing and gear than I knew what to do with (we called it Nike Christmas), world class facilities, a learning centre devoted to athletes (stocked with food) and a football team whose stadium held 70,000 fans and was always roaring at maximum capacity.

It was awesome. Being an athlete at a Big Ten school makes you feel like the biggest fish in the sea. As for field hockey, we were consistently ranked in the top 20 and our coaches ran one of the most prestigious programs in the country.

I bet you’re starting to wonder why I would ever choose to leave before my time was up? Well, it was not an easy decision. I felt like I was letting down my teammates who had also become my best friends, my coaches who had invested time in me and breaking a four-year commitment I had made. 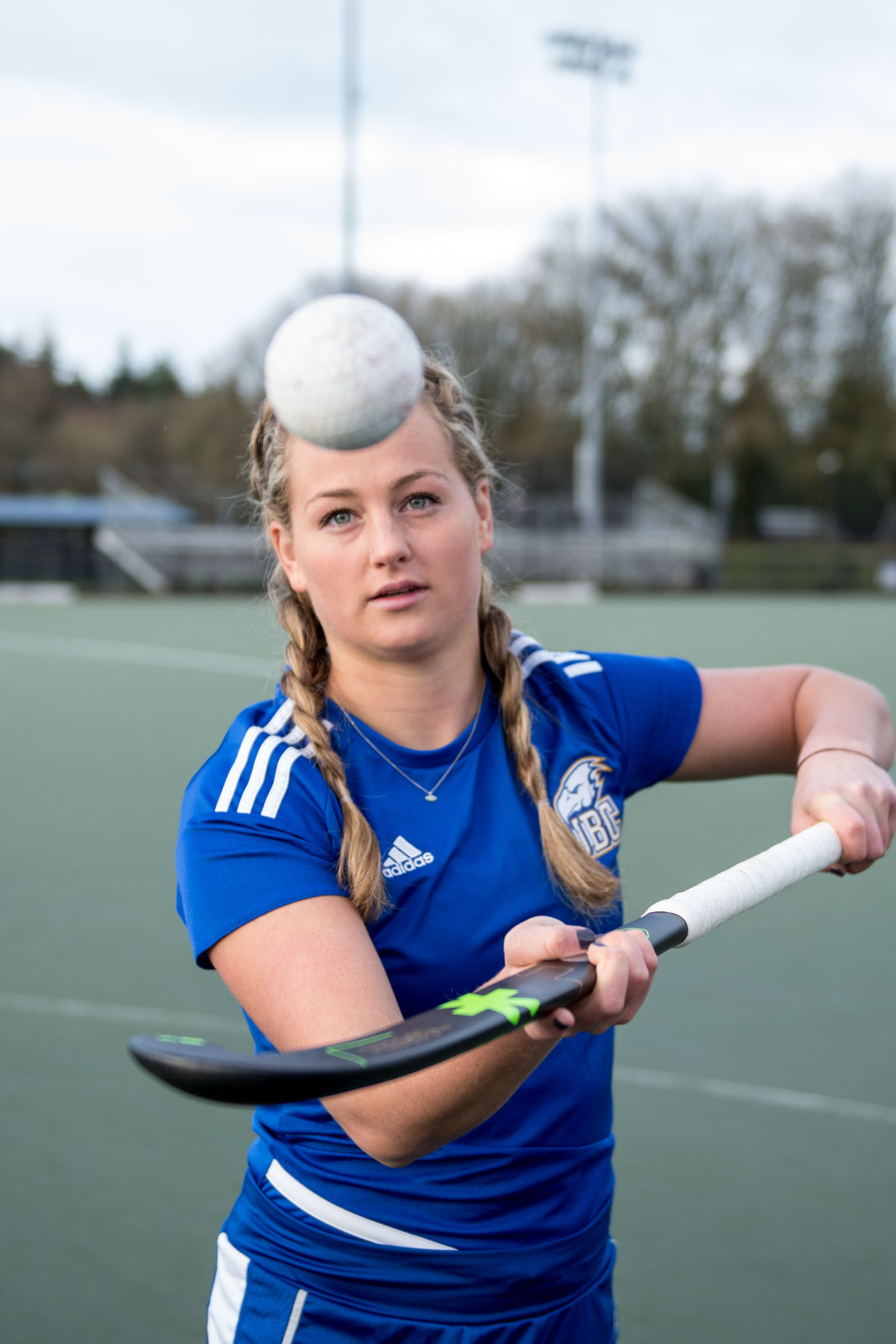 Saying it was hard is an understatement, but I knew it was time and the right decision to make. My commitment to the Canadian National Team had grown immensely that past spring and summer. At the time, I was considered part of the senior development squad, and I was fortunate enough to have made the tournament teams and competed in both the 2015 World League 2 in Dublin and World League 3 in Valencia. These tournaments were Olympic qualifiers for the Rio 2016 Olympics that happened this past summer.

Although we did not qualify for Rio, it was an experience like no other and it ignited my Olympic dream even more. I knew the next step in my Olympic pursuit was to commit full-time to the National Team, which entailed me moving to the National Training Centre that happened to be in my hometown city of Vancouver. I knew immediately I wanted to finish my undergrad at UBC and lucky for me, I had eligibility left to play two seasons with the UBC Thunderbirds.

Skip to September 2016, where my story with this team began. Sure I was new, but I already was friends with a bunch of girls on the team, including my national teammate, Hannah Haughn. Hannah and I go way back — like elementary school! My transition to this team was seamless. Everyone was welcoming and open, and I immediately knew I had joined something so special.

Our season went on to be full of great moments and I made everlasting memories with every single person on our team. I truly am lucky to be surrounded by such an amazing Thunderbird family. The endless support our team receives from alumni is incredible. It is so inspiring to be a part of a program, and I know that the memories I make today and all the friendships I have now will still be with me for years and years to come.

One of my highlights from the season was playing the University of Calgary Dinos and against my younger sister, Meghan. It was a unique opportunity that brought a whole bunch of my friends and family out to the turf to watch the Norlander sisters battle it out. Another highlight was becoming Canada West champs and see my teammate Rachel Donohoe get awarded Canada West player of the year. She also won the U Sports co-player of the year. 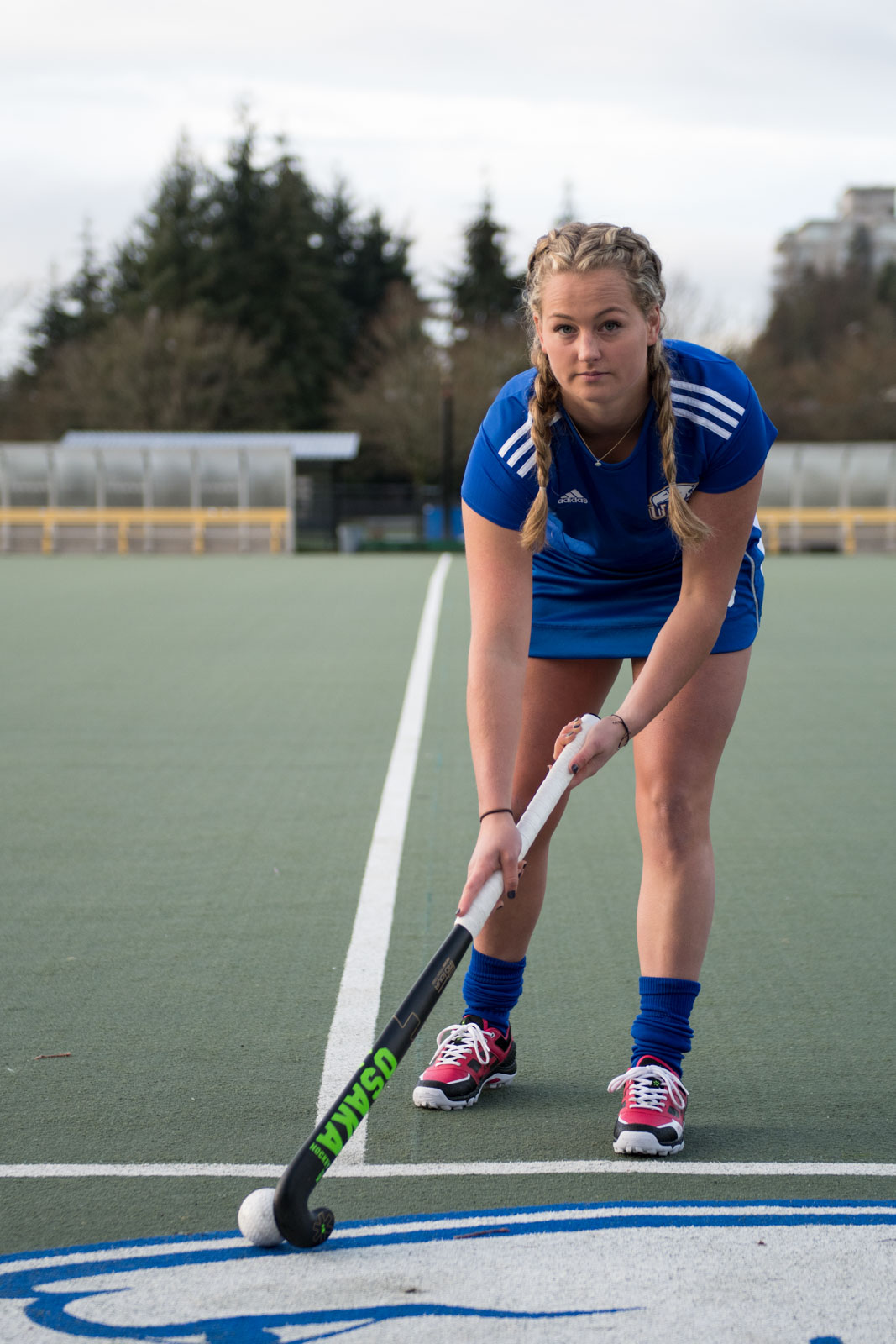 Even though it really was a short season — September to end of October — it flew by way faster than I could have ever imagined and I found myself all of the sudden on a plane to Toronto for the national championships. Sitting there, 30,000 feet up in the air, I began to think about how crazy winning five straight national championships is, and here we were, ready and prepared to win a sixth.

In that moment, I felt proud and honoured, excited yet nervous, and was in the mindset that I was about to go to battle with 15 of the finest hockey players by my side. How did I get so lucky?!

All of our hard work throughout the season paid off. Winning a national championship in the sport you love, with the best of friends by your side, is indescribable. A feeling like no other that you get goosebumps when thinking about it.

I will cherish the memories we made this year for the rest of my life. I want to extend the biggest thank you to every single person who helped me along the journey to becoming a Thunderbird. To my teammates, thank you accepting me into your team this year. Coming away with a national championship and the memories and friendships I have made is everything and more I could have dreamed of!