Their Krampus: A seagull laid an egg in my mouth at UBC Robson 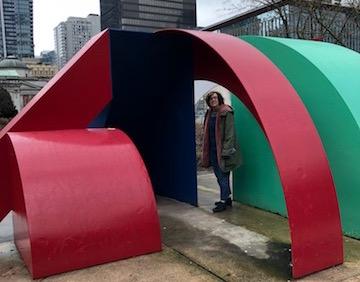 Here's me showing off my dorm Mia's sister

I waited months to get my GoGlobal application back. I was hoping for someplace exotic, Australia, Belgium or — maybe even my dream — Oman. I was shocked and delighted when I heard where I was going: UBC Robson.

I got off the skytrain and the local scent of stale city fumes filled the air. How foreign! As part of my GoGlobal offer, I was billeted in the Primary no. 9 sculpture at the courthouse. It’s so cozy. A seagull laid an egg in my mouth while I was sleeping. Room and continental breakfast? Sweet!

One thing that really surprised me was that they take classes in English at UBC Robson. I was totally relieved when I found that out though, because I was having a wicked hard time finding an English-to-Robsonese dictionary.

On my days off days, I would go watch cases at the BC Supreme court. My favourite cases were the arson ones, but that might just be because I dabbled in arson a bit in high school — only to have something to add to my UBC admissions essay, of course.

There weren’t that many extra curricular things to do on campus. Really, the only two choices were ice skating or joining one of the many many roving dance troops that practice on campus. At night, the dance troops would throw rocks at my dorm. It got kind of scary at times, but it was nice to learn about the local culture.

Going back to UBC Normal was tough. I had so many distance acquaintances at UBC Robson, how was I supposed to leave them behind? In the end, I am so glad I went on exchange. Now I can pretend to have an accent and I can lord this over so many of my friends. I would totally recommend going to UBC Robson, get ready for a culture shock though!