The Dingbat: Buchanan B can’t fool me — that’s a pole, not a French tutor 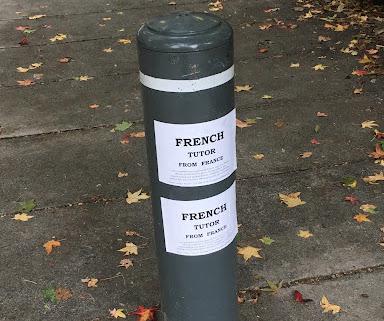 Does this LOOK like an accredited tutor to you? Tova Gaster

What do you see when you look at this photo? A humble French tutor, posted up day after day in the courtyard outside Buchanan B plying their trade? Look again.

This is a metal pole, not a French tutor — despite two signs to the contrary (overcompensating much?)

If you have been fooled, you are not alone.

I was not wearing my glasses that day, because after witnessing the beautiful TA from FIST420 in the rose garden frenching a guy with a man-bun more luscious than mine, I decided that I had seen enough. I had also just received a disappointing mark on my latest French film term paper.

“Hello,” I said, to the short, stout, Frenchman (metal pole). “Are you accepting new students?”

My new French tutor (a post. I cannot emphasize enough that I am talking about the metal post outside Buchanan B) stared back at me blankly. 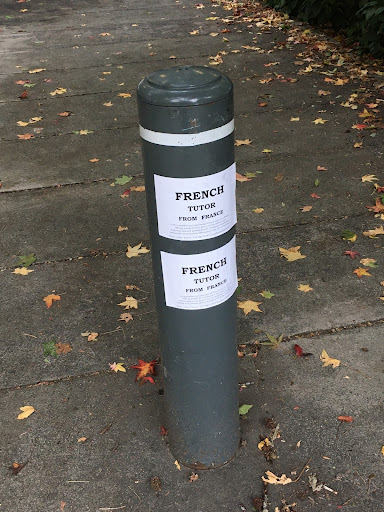 He had an undeniable magnetism to him, though. Tova Gaster

At first, I thought they just chose not to respond to English. Dang, this guy is really serious about French immersion, I thought. I’ll be fluent in no time! I can’t wait to impress the TA in French film studies with my authentic pronunciation of “ennui”!

“Bonjour?” I tried again. It (the pole) still didn’t respond. I started to get offended. Francophones are so snobby!

This tutor probably isn’t really from France, I started to suspect, noting a sheen of Canadian frost glinting off of their smug bald head. They’re probably just from Montreal or something. They probably vote for the Bloc Quebecois!

With that thought, I started to get really mad. I’m not proud to say this, but I got physical.

I punched the pole.

I broke my hand.

After four months of recovery, I’m back and determined to stop this little Napoleon’s reign of terror. Wake up people! Even a Pole (from Poland) would be better at teaching French than this pole (from the metal pole factory), and I’m going to make sure everybody knows it.

UBC’s legal team is trying their hardest to censor my attempts to pursue legal action, but I’m not giving up. In response to my many emails, UBC liability lawyer Virgil Surname wrote “anyone could tell that was a pole,” and that “administration isn’t responsible for student stupidity.”

To which I say: bullshit.

My correspondence with UBC’s legal counsel raised more questions than it answered. Is UBC’s romance languages department so broke from buying a campus in Surrey that they’re replacing the French department with a literal metal post? Why do we speak French in Canada anyway? Why don’t hot girls want to come back to my dorm to watch Amelie with me?

I’ve had enough of the lies: from UBC infrastructure, from the garbage nation of France and from the effervescent European art hoes who apparently are “busy Fridays, and also every day forever for the rest of my life, désolé :(”

The Dingbat is The Ubyssey’s humour section. You can send pitches or completed pieces to blog@ubyssey.ca.