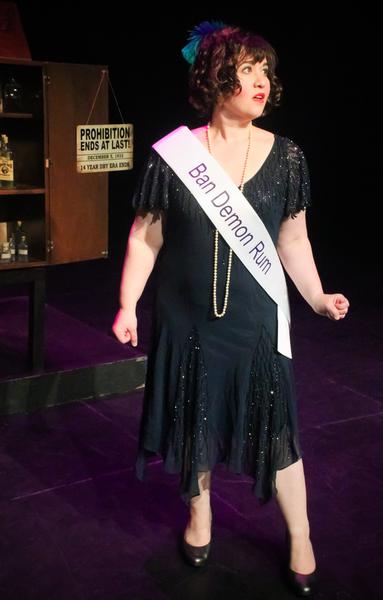 When one thinks of the 1920s, it would be natural to jump to the extraordinary flapper dresses and ever-flowing champagne that trademarked the era. Perhaps a time of hardship followed by such glamour has a certain sway on the contemporary audience who seeks to be nostalgic of almost any era of the past.

But, a time of such historic indulgence also came at a time of historic impotence, as the incredibly controversial prohibition bill came into effect across much of North America in the early 20s.

For Melanie Gall, whose new show, A Toast to Prohibition, debuted at the Vancouver Fringe Festival, the thrill goes much beyond just what Baz Luhrman’s The Great Gatsby has to offer.

Sitting in front of me (or my computer screen, rather), Gall is a sight for sore eyes with her freshly-washed hair and a smile brighter than the 9:45 a.m. sun. With her pet bird keeping us company through the interview with gentle twittering, Gall explained prohibition to me better than any history class ever could.

“We had prohibition here in Canada at several different times. Often it was to save the grain [and] the barley to produce beer or to produce the different hard liquors. It was during wartime and it was done as an austerity measure to save that for the soldiers,” said Gall.

When asked why she chose to bring prohibition to a Canadian context, Gall was delighted to fill in the blanks.

“In America, a lot of Canadian millionaires made their fortune over American prohibition [by] importing alcohol,” said Gall.

“A lot of the major producers of scotch or whiskey in Canada built their companies because of American prohibition, because things were often produced in Quebec [or] in Ontario. But it was smuggled into the States, largely on the West Coast, a little more from Victoria than Vancouver.”

When asked why she chose the 1920s in particular as a focus for A Toast to Prohibition, Gall admitted her reasoning was a marriage of both personal and professional interests.

“A lot of the shows I do are biography shows about famous singers in the 1930s or 1940s. I love doing that, but you don't get the younger audiences in. And I thought prohibition will do it, because I get to wear the feathers and the dress,” she said with a laugh.

As a former opera performer who studied and performed at various universities across Canada before moving to New York, Gall has ambitions to take the show across the globe.

While the play itself was designed to celebrate Prohibition’s 100th year anniversary last year, Gall has hopes that 2021 will be as good a year as ever to share the piece with the world.

“I am taking it to Edinburgh next summer and bookers from all over the world, including New York, come to the Edinburgh Fringe. So this [Vancouver Fringe Festival] is sort of the festival where I put in any last changes. This is what it was like before the pandemic; it was just ‘write a new show, test it out across Canada, take it to Scotland, get bookings around the world, do them.’ And next year, I’d do it all over again with a new show.”