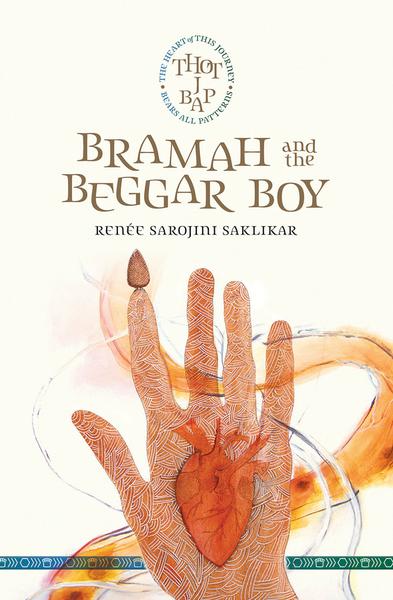 “If we don’t get it right, these troubles will get worse - it’s like a vortex,” says Saklikar. Art by Nadina Tandy, courtesy of Renee Sarojini Saklikar.

“What we haven’t made good, catastrophe will make worse,” said Renée Sarojini Saklikar, lawyer, poet and author in an interview with The Ubyssey.

Regarding our rapidly accelerating world overrun by a pandemic, climate change and inequality, a question that our generation faces is whether good will endure. In response to this question, Saklikar spins a cautionary tale called Bramah & The Beggar Boy – a three hundred page epic told in verse and the first book of a fantasy series.

The world in this book bears much resemblance to our own, complete with a global industrial and economic structure named the Consortium that controls every aspect of people’s lives – right down to the seasons. In this setting, the protagonist, Bramah, a locksmith, and her adopted beggar boy discover an oaken box. From the pages of the worn out parchment scrolls, they find within a story of resistance against climatic, economic, social and political pressures unfurls.

Unlike most time-travel books which focus on the future, this book uniquely sets its world in the far future, and peers back into a ‘past’ which is really our present. Significant years in the epic are 2020, when the world is plunged into a pandemic; 2050, a turning point marked by the “Battle of Kingsway” or the disintegration of the West; and 2087, the “New Dark Ages” where people have “abandoned fact for myth,” when science and medicine is banned – and even language is altered.

“Before is also a place,” stressed Abigail, a leading character who time travels through portals made by abnormally changing seasons, bartering and trading secrets from Baghdad to Paris. This quote is befitting as each of these years seem to embody alternate worlds due to such a rapidly changing socio-economic climate like ours. Using this reverse way of time travelling, the epic may be taken as a warning for current global issues, and what may happen if these issues are not taken seriously.

“If we don’t get it right, these troubles will get worse - it’s like a vortex,” said Saklikar.

“What choices do we make that make big systems evil?” Saklikar asked, and this is the central question in Bramah & The Beggar Boy. The Consortium is most prevalently defined by inequality, where in a world ravaged by climate change, bio contagions and war, shortening supplies are hoarded and kept locked away inside the Perimeter and away from outsiders. From the outside, beggared children call upon Bramah to unlock these vaults in rhyming couplets.

Frequently repeated is, “Freedom fighter, terrorist, who’s right wrong? / We just want enough to eat, been so long.” Saklikar explained how this refrain is representative of inequalities visible today. From the top of the supply chain, leaders bicker about political advantages and disadvantages, yet at the bottom there are children who just want to be fed. Big corporate systems and delivery mechanisms are not necessarily evil, yet like a Shakespearean tragedy, difficult choices get the better of people due to profit motives, greed and external forces.

“There is a desire to suppress the truth because lives are at stake and there are tough decisions about who pays the price,” said Saklikar.

A prominent example for this would be the crisis in Afghanistan, a nation which was overrun by the Taliban after US troops pulled out of the area. Though many blame the leaders for this, this is also questionable as 70% of the American public voted for their soldiers to return back home. According to the International Society for Traumatic Stress Studies, 40% of Afghan veterans suffer from PTSD, and again there are indefinite decisions about who pays the price. “How can we blame them?” Saklikar asked, regarding people of power. “We are those people too.”

Though it is difficult to find answers to these complex questions, Saklikar said that her book is ultimately about hope. Indeed, more than the dire conditions inside the Consortium, the story is carried forward by the resistance fighters, including aunties who put to use their folk medicine and knowledge of herbs, and Seed Savers who, as the name implies, save vanishing seeds. Working with them are outlawed scientists, such as Dr. A.E Anderson, a character who risks her life to treat beggared children.

“I have this tremendous belief that there will always be a few good people who sacrifice for the good of others, and that is our hope,” Saklikar said.

Like a stream of consciousness during a dream, Bramah & The Beggar Boy is an enjoyable fantasy epic which travels through differing timelines, locations and generations. Inspired by masterpieces including Homer’s Odyssey, Tales of Arabian Nights and T.S. Eliot’s Four Quartets, the epic’s lines are puzzle pieces which when pieced together, can be read as a comprehensive, critical report on our current world.