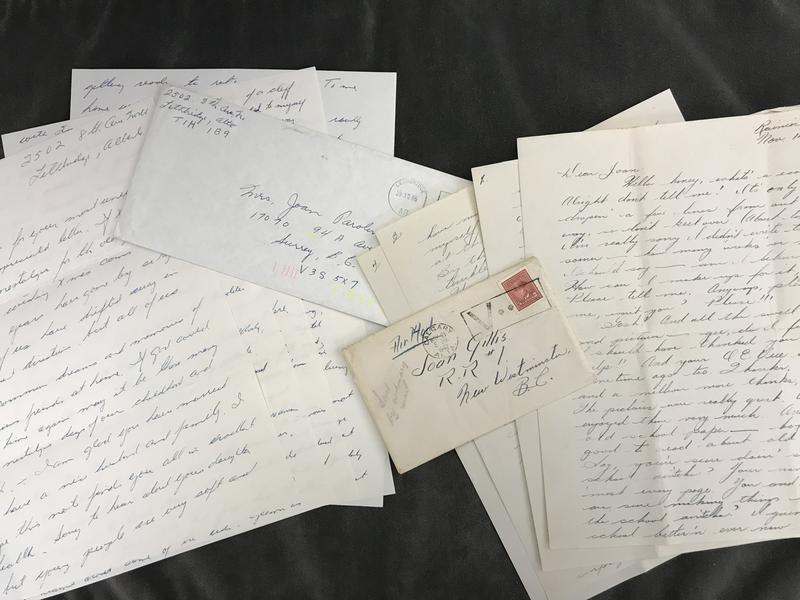 UBC has acquired dozens of letters written by interned Japanese-Canadian teenagers during the internment period of 1942.

The letters illustrated an intimate correspondence between Joan Gillis, a student at Queen Elizabeth High School in Surrey, BC, and fellow classmates who she met while working for the school newspaper.

The year 1942 marked the beginning of the internment of Japanese-Canadians, in which the Canadian government ordered families residing on the coast of BC to relocate to internment camps and sugar beet farms. The relocation required them to be at least a 100-mile radius away from the coast. Homes and assets of the families were then sold and made property of the government, consequently used to fund the running of internment camps.

“I’m just absolutely delighted that we have the letters," said Dr. Laura Ishiguro, assistant professor at the department of history. “I think that we really need new stories about this history, and I say that as a historian of British Columbia, as somebody who teaches this and I also say this as a Japanese-Canadian. We really need to tell different stories about this history, and I think that the letters give us one really amazing way to do that.”

Ishiguro said the relocation of Japanese-Canadians marked one of the many movements in Canadian history where non-Indigenous people of colour were subject to state violence and marginalization.

“The letters show us that there are also these histories of friendship, and I love the insights of these young people who challenge the idea that everything was about fear and division and racism, and the friendships between Joan Gillis and her classmates make really clear that there’s a different story to be told where there were other ideas that were possible.”

Krisztina Laszlo, an archivist in the UBC Rare Books and Special Collections, shares Ishiguro’s delight in being able to explore a different narrative during the internment period.

Laszlo explained that families weren’t allowed to have access to radios in fear of their potential use for contact with Japan. However, through the correspondence with Gillis, the teenagers were able to live vicariously through her experiences.

“The kids write about things that teenagers are interested in [and] how they miss school,” Laszlo said. “In the letters, they’re asking about things that teenagers are worried and concerned about [like] what’s happening in school, they’re complaining about how cold it is in Alberta and the snow, and they’re even saying they missed going to math class and what teenager misses going to math class?”

Describing Gillis as a person “always ahead of her time,” her decades of preserved letters made Laszlo smile as she reflected on her 20 years of being an archivist.

“I’ve seen a lot of really great material in my time and this is definitely one of the highlights. I mean just because … the letters are beautiful, the story of friendship is so profound and I think there’s so much opportunity to learn from these letters and they’re going to live for a very long time and have a really great impact in many, many ways.”

Laszlo placed a small letter in front of her, written by a teenager named Sumi Mototsume. The letter is dated September 24, 1943. Mototsume wrote, “Well, I am just wishing for the day when you and me, telling and hearing each others’ story for hours and hours of what we’ve missed. I only wish it would be soon, don’t you think so, Joan?”

Mototsume’s letter ends with a hopeful promise, “I’ll write again; a longer letter, and I’ll be waiting for yours every day.”