Twelve Days of Completely Secular Yuletide: triple the Hudgens, triple the comedy in The Princess Switch 3: Romancing the Star 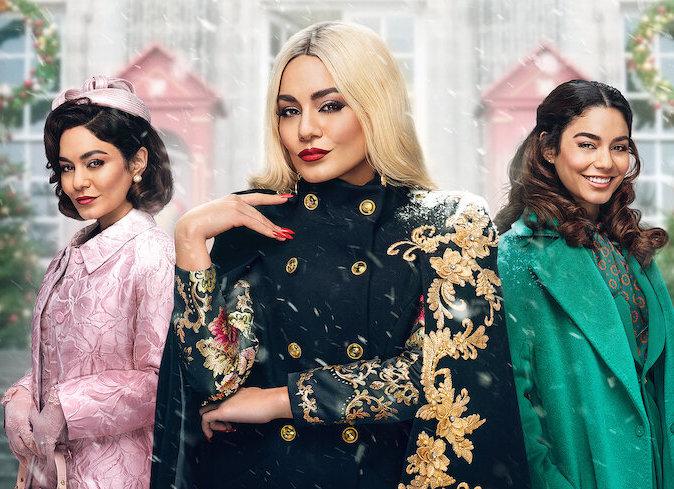 In this movie, we see Fiona begin to open up her typically guarded heart. Netflix

Vanessa Hudgens is back at it again in The Princess Switch 3: Romancing the Star — and by “it,” I mean the task of playing not one, not two, but three poorly written, albeit cartoonishly entertaining, characters in a single film.

If you’re not familiar with the two prior instalments of the series, fear not, because The Princess Switch 3 opens with a concise recap: in the first film, Stacy (played by Hudgens) travels to the fictional country of Belgravia in order to compete in a renowned baking competition, only to discover that she bears an uncanny resemblance to the Duchess of Montenaro, Lady Margaret Delacourt (who of course, is also played by Hudgens). A variety of identity-switching hijinks ensue, with the doppelgängers ultimately finding their respective true loves. As if the first film didn’t demand enough suspension of disbelief, the second boldly introduces yet another Stacy clone, Lady Margaret's glamorous but conniving cousin, Fiona Pembroke (needless to say, also played by Hudgens). Fiona hatches a scheme to assume Lady Margaret’s identity in order to rob the royal treasury, but with the help of more switcheroo-ing the plan is foiled, leaving Fiona arrested and Margaret crowned Queen of Montenaro.

The third film picks up one year later, days before Montenaro is to host an extravagant international Christmas festival — so extravagant that the Vatican lends the city the “Star of Peace,” a sacred Christmas tree-topper. Naturally, the relic is stolen almost immediately, without a single trace left by the thief. Stacy and Margaret quickly realize that in order to retrieve the star, they need to enlist the help of someone who knows the ins-and-outs of criminal life: Fiona.

If there’s one thing to be said about The Princess Switch 3, it’s that Hudgens seems to be having the time of her life playing Fiona. With a puzzling British-adjacent accent dripping in drawl, Hudgens delivers her lines with commendable commitment — which is a tall order for a script as ridiculous as this. The spoken jokes never fully land and the physical comedy is laughable for all the wrong reasons, but thanks to Hudgens’ zany performance, these faults have the potential to come off as charming rather than cringy (at least to the more forgiving viewers).

Given that Fiona was presented as a cartoonish villain in the The Princess Switch: Switched Again, I assumed that a film centred on her character would be lacking in heart. However, I was pleasantly surprised to find that The Princess Switch 3 made an effort to give Fiona depth without compromising her flamboyance. We learn that Fiona spent her childhood in boarding schools, isolated from her family. In order to locate the stolen star, Fiona seeks the help of her sole childhood friend, and later ex-boyfriend, Peter (played by Remy Hill). As she rekindles her relationship with Peter, we see Fiona begin to open up her typically guarded heart. Maybe it was just the finals stress getting to my head, but during the scene in which Fiona is reunited with her estranged mother, I found myself tearing up a little.

The Princess Switch 3: Romancing the Star will not go down in the books as a Christmas classic. However, if its abundance of flashy holiday dresses, marvelously decorated castles and massive Christmas trees isn’t enough to get you in the spirit of the season, I’m not sure what will. If you’re looking for a silly, lighthearted watch that doesn’t command your full attention, The Princess Switch 3 is as good a choice as any.