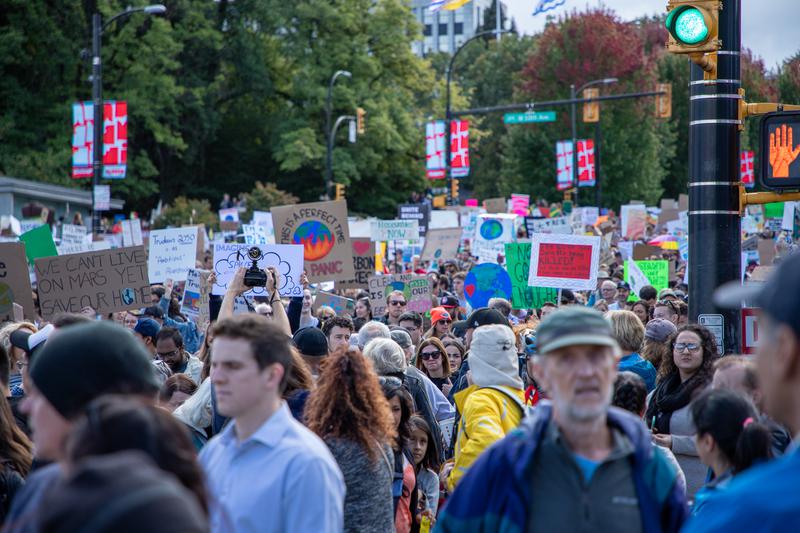 Climate action is a long journey but at least we at UBC are doing it together: faculty, staff and student body. Emma Livingstone

On September 27, UBC student groups organized a climate strike to voice demands and concerns over the ongoing climate crisis. The movement was part of a larger international initiative calling for societal and political climate action.

The UBC strike was facilitated by a number of student organizations, including the Social Justice Centre, Climate Hub and UBCC350. After an hour-long demonstration in front of the Nest, a convoy on bikes and buses headed down to join the strike at Vancouver City Hall, forming an estimated crowd of 100,000 attendees.

While the university did not officially cancel classes, some departments and programs issued statements on the strike or allowed individual professors to cancel their classes. This action likely empowered many students to participate in the UBC event and the Vancouver Climate Strike without fear of penalty or repercussion from missing class.

Dr. Eagle Glassheim, head of the department of history, said faculty were keen to support students.

“We feel gratified to see how seriously students at our university and around the world have taken this issue, and want to support that movement.”

Many department heads and faculty members had a strong sense of solidarity with the student body and did their best to express their support via official statements, canceling classes and even creating spaces for students to make signs and coordinate.

When asked why he chose to participate, Glassheim highlighted his career and research interests as a driving force.

“My personal interest has been driven not just by my scholarship, but also by [my] concern with public affairs and the impacts of fossil fuel emissions on the climate,’’ he explained.

“It’s both my research interests and my teaching but … also, my engagement with our current affairs and with the significant threat that climate change poses to our Earth.”

Additionally, a small group of faculty at UBC has invested in the climate strike beyond solidarity with students by donating a day’s salary to environmental initiatives.

Political science Professor Dr. Kathryn Harrison donated her pay to the organization that works with parents and grandparents trying to respond to the climate crisis. She also cited her work as a driving force behind her support of the strike.

“[W]e are professors. And most of us are parents, as well … There’s a fair number of faculty in this department who have done at least some research on climate change policy, whether it’s from international relations, comparative politics, Canadian politics, public opinion. [Climate change] is a huge problem. And it’s increasingly urgent.”

In both the history and political science departments, the motions to support students were passed unanimously. If Glassheim and Harrison’s sentiments are shared by other involved professors, this is unsurprising.

Glassheim finds the international movement to strike as “an incredible mobilization by our students, by students in primary and secondary schools as well as at universities around the world.”

For Harrison, seeing how the strike has flourished has been incredible.

“One of the most hopeful things I have seen is the emergence of this youth movement. And I think there have been, there has been little Greta [Thunbergs] in many countries for quite a while … [and] suddenly, there’s this recognition that this is serious. There’s a generation of children who have learned and young adults who have learned about climate change in school. And so the fact that this has taken off worldwide, that the scale of the protests is so big, has given me hope.”

— With files from Thomas O’Donnell