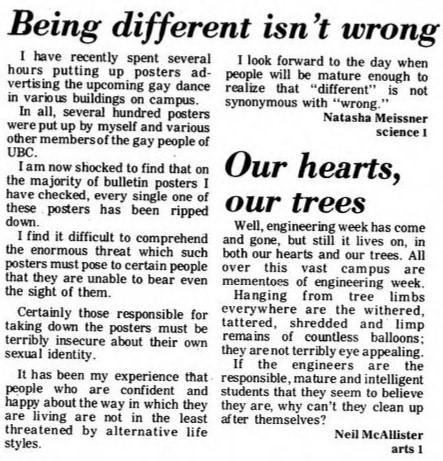 Meissner's letter, along with a long subtweet to engineers. UBC Archives

On February 10, 1977, The Ubyssey published a letter by Natasha Meissner. The letter describes her frustration after the posters that she put up for an upcoming dance put on by the Gay People of UBC club were torn down. In the closing paragraph she says, “I look forward to the day when people will be mature enough to realize that ‘different’ is not synonymous with being ‘wrong.’”

42 years later, we spoke to Meissner (NM) on her motivations behind the letter and how she feels now:

Thomas O’Donnell (TO): So what prompted you to join the Gay People of UBC club?

NM: I was 17 years old, I had just finished high school, I was in my first year at UBC. And what primarily prompted me to join the club was simply to make friends. You have a social context to meet other, hopefully like-minded people on campus.

TO: In your words what was the sort of reaction to the club on campus, if you can speak to that?

NM: It’s difficult for me to speak to that. I don’t know sort of what the more general reaction was. I do know that as my letter indicated, there was clearly some antipathy amongst some part of the population on campus at the time towards the gay people of UBC, just as indicated by the removal of all of those posters, when we were trying to advertise dances.

TO: Do you remember writing this letter?

NM: I don’t remember writing the letter. When you sent it to me and I read it, I did remember.

TO: And then I guess the flip side of that is like, how do you feel reading your own words? Like, 50 years later?

NM: I think I was struck with a sense that I was quite courageous at that time for my age, and in that context. When I read it, I was glad that I was as outspoken as I was, at that time. And it reminds me of the person who I was then. You know, being someone who didn’t want to be told by others what it was okay to be or not to be.

TO: Do you feel like you still have that sense of yourself now? Do you think that you would write this letter now?

NM: I think in today’s climate and society in Canada, I think it’s a very different environment than it was back in 1977. I would say that if I was similarly placed today as I was, then yes I would write that letter. But I think we live in that, I’m glad to say [...] what I feel is [a] more, open and tolerant society in many ways now than it was in 1977.

TO: Do you feel that currently, we live in a day and age where people realize that ‘different’ is not synonymous with wrong?

NM: I think in some parts of the world, that may be the case. But I also fear that there’s a lot of back slippage, towards less tolerant views. And I worry about that. I certainly feel that, of course, there are many parts of the world in which there is very little tolerance for people who do not conform to whatever the societal norms of that part of the world are.

This interview was conducted for an upcoming article on the history of the Pride Collective.