Billy Elliot: The Musical is electrifying and touching 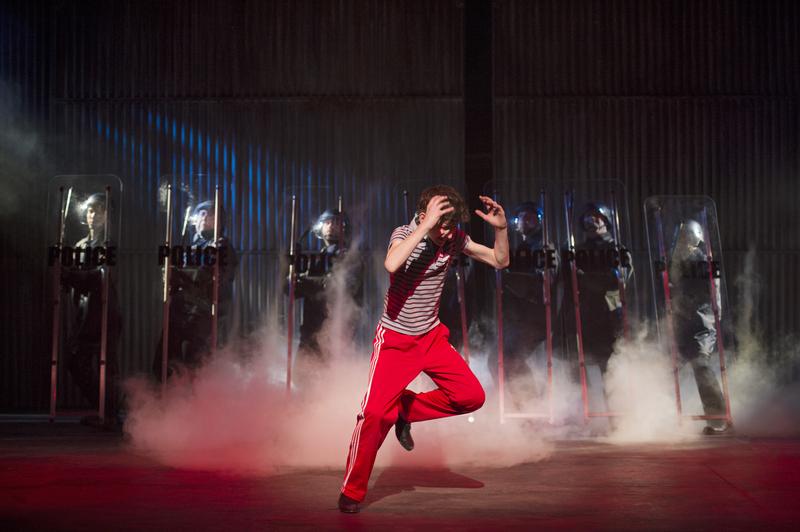 Presented by The Arts Club Theatre Company, Billy Elliot: The Musical is now playing at the Stanley Industrial Alliance Stage. This musical drama, directed by Bill Millerd, is an electrifying and touching musical about a young boy finding his passion and a community overcoming obstacles.

The plot is centered around the miners’ strike which took place in England between 1984 and '85. It was a protest against the widespread closure of mine pits which would result in the loss of livelihood for many.  The play is set in a small pit village in northern England, where a the eponymous Billy (Nolan Fahey) finds himself accidentally thrown into a ballet class. Having grown up in a family of coal miners and been surrounded predominantly by men, Billy is expected to enjoy boxing but instead begins to love dancing which is encouraged by the dance instructor, Mrs. Wilkinson (Caitriona Murphy).

The Arts Club’s artistic team has abundant young talent. Fahey’s performance was beautiful from start to finish. His years of dance training were most evident during beautiful rendition of Swan Lake, which incorporated swanky acrobatics and Billy flying through the air. Credit also belongs with Matthew Cluff, who plays an older version of Billy.

Warren Kimmel, who plays Billy’s dad — an aggrieved and lonely but caring man — performed with gusto and Mrs. Wilkinson’s character, played wonderfully by Murphy, was exemplary and inspiring. Her character was soft and protective at times, but also strong and resilient. Murphy delivered a strong performance and owned her dances and songs.

The production boasted a wonderful score, originally composed by Sir Elton John, which was performed by a truly gifted orchestra. The music ranges from melancholy melodies to flashy show-tunes, each perfectly portraying the sentiments of the scene. Lee Hall’s original book and lyrics, albeit containing quite a few expletives, are raw, sharp and capable of evoking a strong emotional response.

Witty dialogue and humorous performances by strong characters made the play light-hearted at times, having the whole theatre laughing out loud. While at other moments the characters manage to evoke a sense of grief in the audience, feeling both for Billy and for the miners. The story line is endearing and draws the audience in, making them connect with the characters throughout.

Along with the elegant structure of the Stanley Industrial Alliance Stage, the set design in the play was truly great. Seamless transitions between multiple backdrops, well-designed sets and realistic costumes all enhanced the production, adding to its allure. The actors also delivered their roles with accurate and impressive accents. Although hard to understand in a few moments, it was not of major concern.

Overall, Billy Elliot was an immensely enjoyable musical experience and recommended for anyone who is ready for an evening filled with laughter and tears. The whole cast was exuberant, filled with enthusiasm, talent and sincerity.

Billy Elliot: the Musical will be playing until July 10. Tickets are available online.