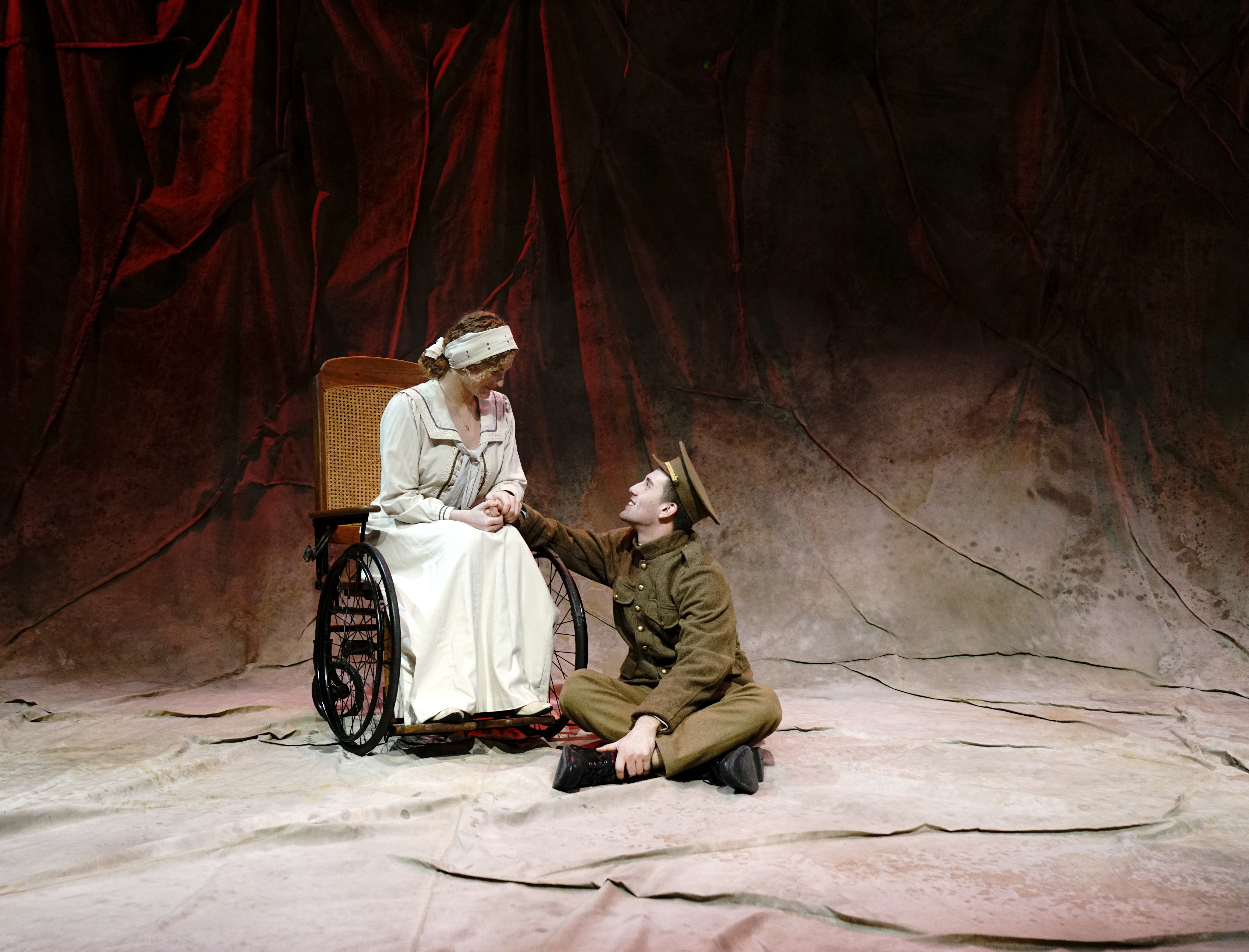 “The struggles and the trauma aren’t exclusive to World War I. … It’s a story about young people and everyone can relate to that.”

How do we retain our humanity in the middle of war? How do we find light when darkness envelops us and hold on to each other when chaos is everywhere?

These are a few of the questions that UBC Theatre is trying to answer in their production of Timothy Findley’s The Wars, adapted by Dennis Garnhum. The play is set during World War I and follows Robert Ross, a young Canadian who sets off to war after a family tragedy. Robert trades his comfortable life at home in Toronto for the trenches of France and the audience follows his slow unravelling over the course of the play.

The play is adapted from Timothy Findley’s The Wars, a 1977 novel that won the Governor General’s Award for English Language Fiction. Adapted by UBC Theatre alum Dennis Garnhum, the play was originally co-produced between Theatre Calgary and the Playhouse Theatre Company of Vancouver in 2007. 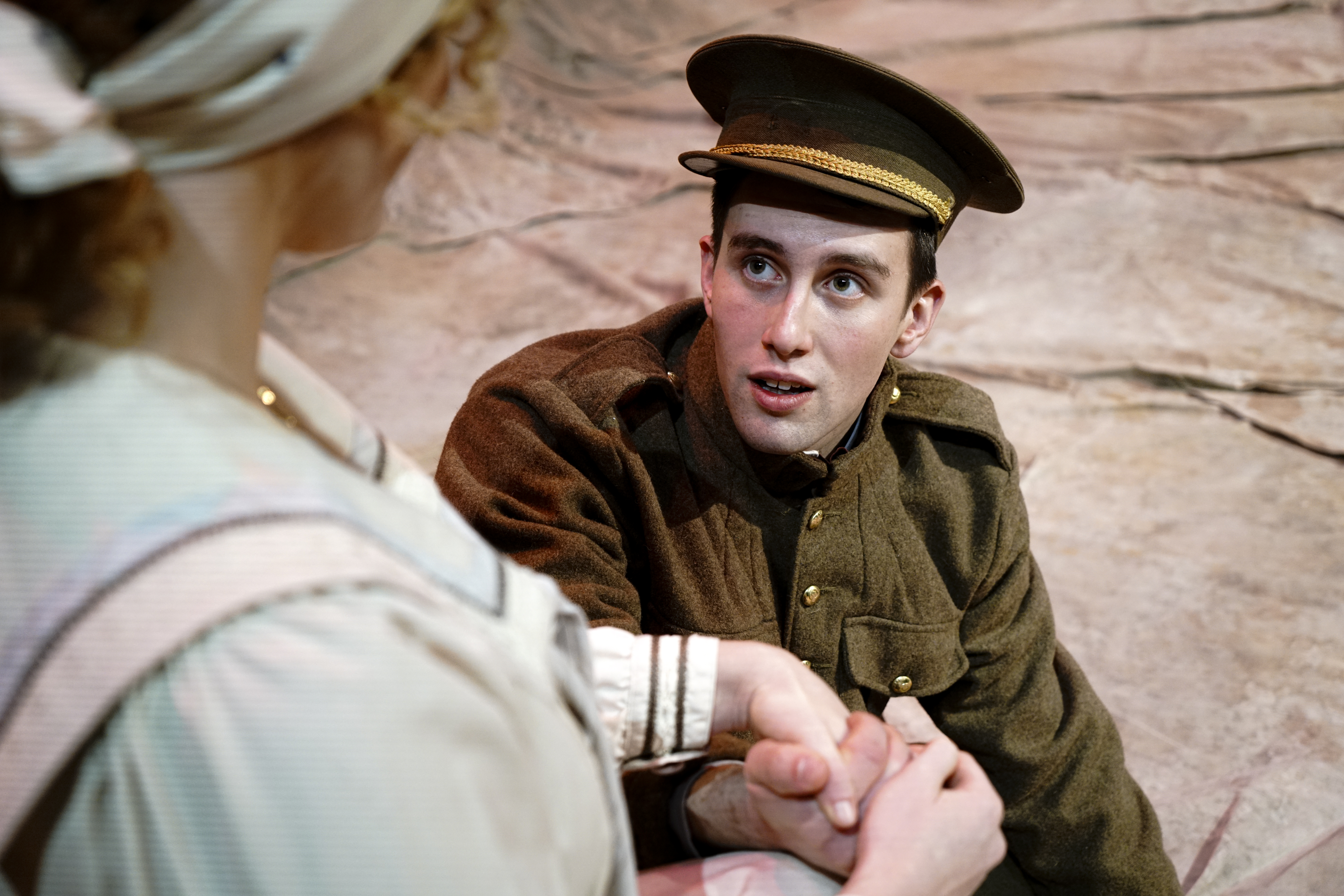 The central idea of the play is connection Elizabeth Wang

Though set in a time that can seem far away, the play continues to be relevant through its themes.

According to director Lois Anderson, as our world becomes increasingly chaotic, the group of young actors performing The Wars echoes the story of young people in 1914 navigating the chaos of WWI. The parallel is part of the reason she suggested this play to the graduating class, along with the fact that the source material is well-known in Canadian literature.

The central idea of the play is connection — between the character themselves and the animals who appear throughout the story. That concept comes out of the novel and its author, Timothy Findley, who Anderson said describes connection in terms of the different types of love.

“What he seems to be saying in the book is that ultimately what [are] left in a world that has gone mad [are] those moments of connection. ... That is actually what is left of life, when everything else is stripped away,” she said.

These connections are formed not only in the middle of the war, but in spite of it.

“These are characters who actually seek out love and affection, even when their survival is [in] jeopardy,” said actor David Volpov, who plays Robert Ross.

Throughout the show, the animals are one of many points of connection — Robert empathizes with the horses caught in the middle of the war and he strives to protect them, along with the various other animals in the story. The animals are given a presence through lighting.

“It’s a way that they connect to those animals without [the animals] physically being present because we can’t put 130 horses on [the stage],” said lighting designer Matthew Piton.

From the sea to the fields 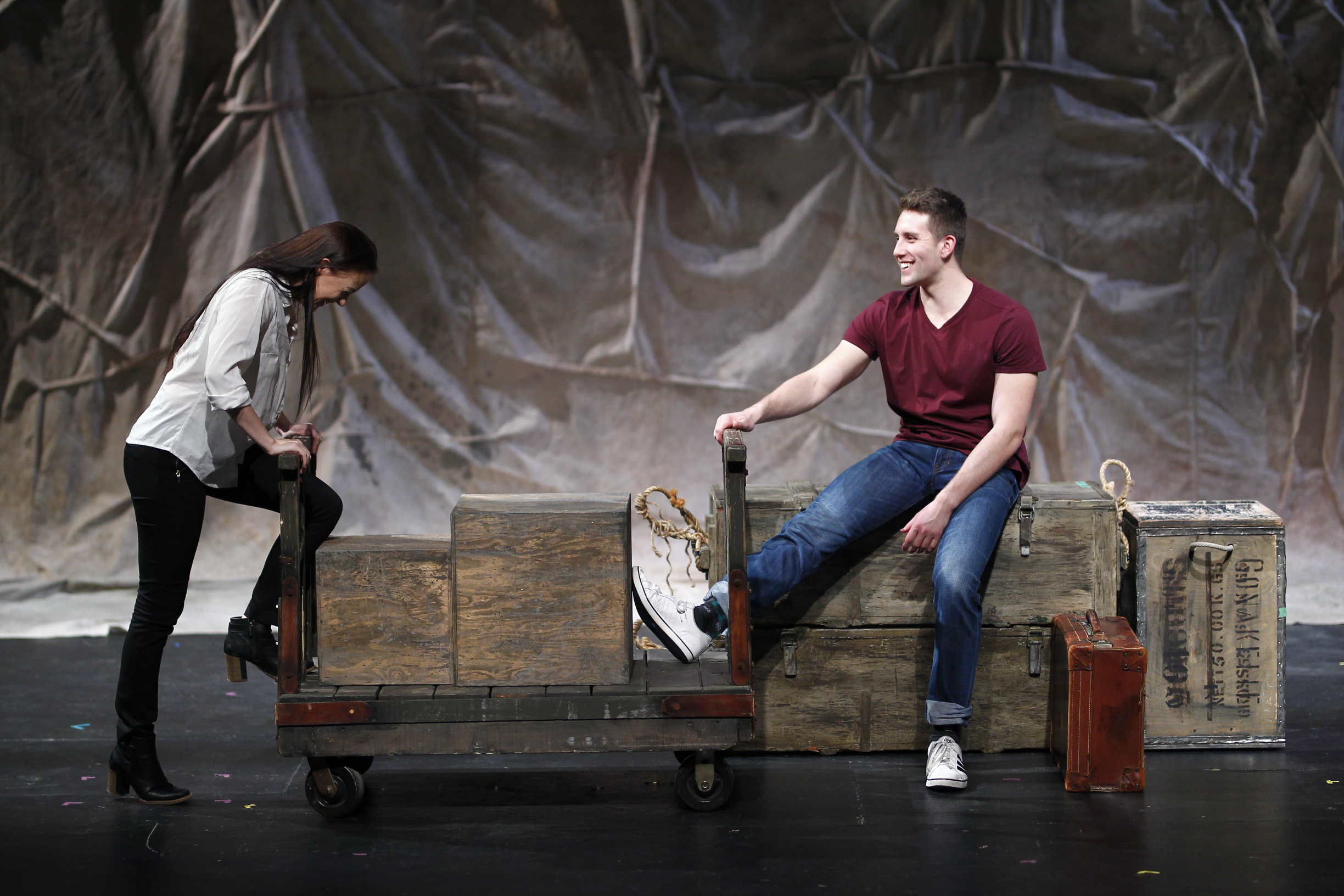 To Anderson, art is more interesting without an enormous budget Elizabeth Wang

Without a massive budget or some sort of virtual reality technology, the main challenge of the production was a familiar one to the theatre: how to bring an audience to World War I and immerse them in the experience with “minimal and elegant design,” as Anderson put it. “How can you journey people … to various locations, to the ocean, to a ship, to the fields of France, to England,” said Anderson. “That is actually art, is taking an audience somewhere with a few pieces of something and evoking the emotion of a place.”

To Anderson, art is more interesting without an enormous budget — that’s what allows the creativity of the designers to shine through.

Piton echoed the sentiment of moving away from realism to focus on the emotion of the piece.

“Trying to make the floor look exactly like mud with light is impossible without a million dollar budget,” he said, “But you can still give the audience that feeling.”

When it came to the set, designer Cecilia Vadala was inspired by the fluidity in a script that moves from Toronto to Alberta to the other side of the Atlantic Ocean with a kind of elegance. Working with Anderson and the other designers in a collaborative manner also helped drive home the idea of connection, where everyone is responsible for bringing the different locations to life together.

“All these locations are connected and brought together by the actors and the characters, so we really see in every aspect of the idea of coming together to make something happen,” she said.

To facilitate this fluidity, Piton decided to minimize the use of blackouts as much as possible and to use the lighting to draw all the moving pieces of the play together.

“The scenes flow together and as the actors are manipulating the set, it becomes something else. … The lights are flowing us through that,” he said. “It’s not like ‘Okay, we’re stopping here, we’re changing everything and then we’re going back up again.’ It‘s one piece.”

The production design is constantly changing, particularly as the actors start to rehearse. The designers incorporate the actors’ performances into their vision of what the production will look like.

“It’s always a true inspiration because I really like to see the actors on their journey,” said Vandala. “I’m gonna always add and tweak my set till the very end to make them feel like it’s their world because that’s what really means the most to me: seeing their connection to the world and have them represented in there.”

“Just in this last week when our elements have finally come together on the stage in reality — it's so incredibly rewarding to see,” said Piton. 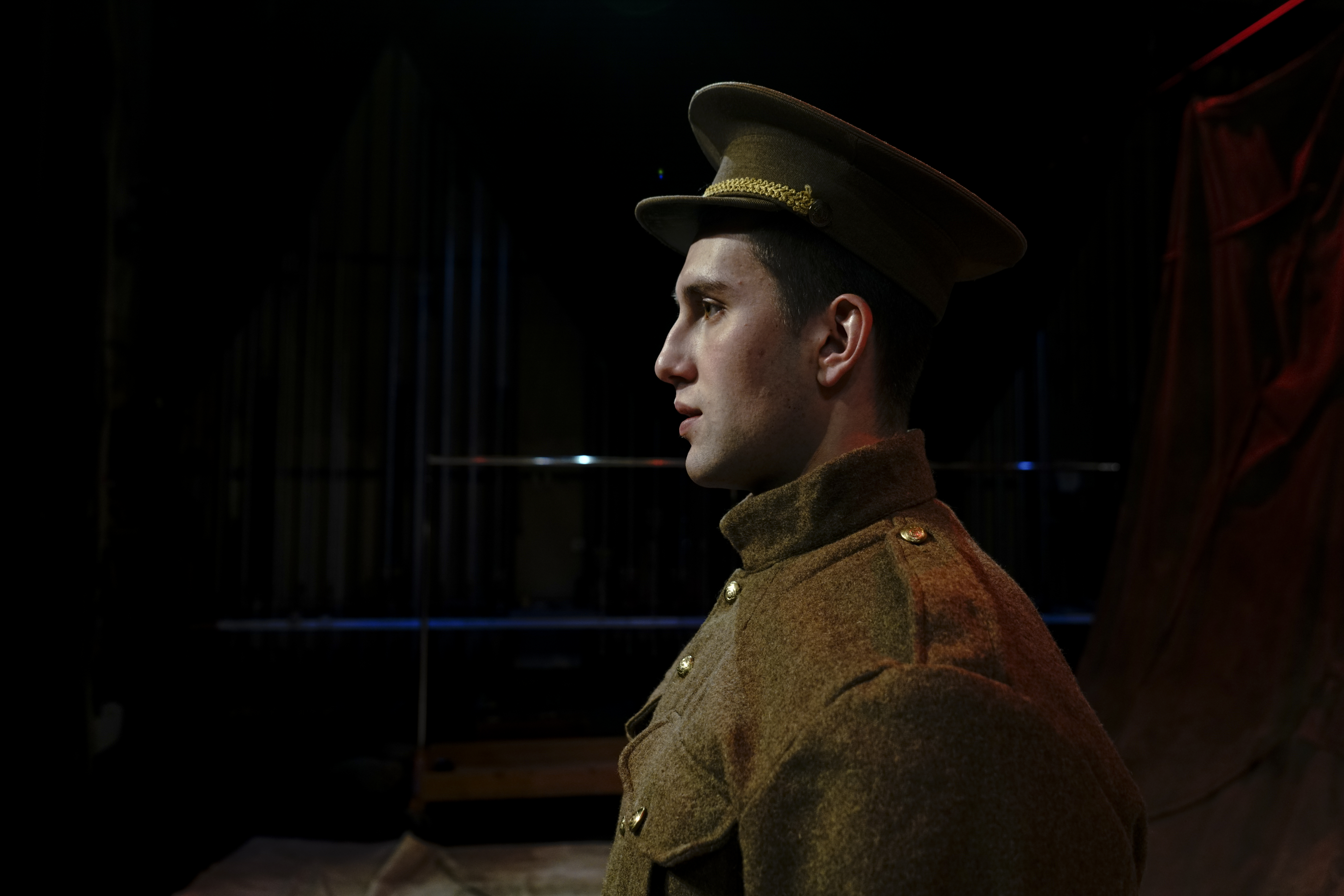 “The struggles and the trauma aren’t exclusive to World War I. … It’s a story about young people and everyone can relate to that,” Elizabeth Wang

This production of this play is unique in that it is being staged as a play within a play. The play space of the characters’ journeys will be at the very front of the stage, but if we look past that area, we’ll also see the actors walking around backstage with some in their street clothes and others in costume. They’ll be preparing to go onstage, putting on costumes and makeup, but there will also be actors simply watching.

To actor Ava Safai, that element of watching adds an important dimension to the production.

“[This story] is an important piece of history and it should be watched and it should be observed … because you don’t want this kind of thing to repeat again. And there are so many connections that happen and a lot of them you will notice are happening kind of behind the scenes, behind the curtains.”

At its core, Robert’s story is about a journey as he moves from “one extreme to another,” as Volpov put it. He’s thrown into a war as a lieutenant and needs to learn very quickly how to take on responsibility for the lives of the men who follow him.

On this theme, Anderson and the actors emphasized the ensemble aspect of this story. The bulk of the story following Robert features the group of soldiers that coalesces around him and the camaraderie that forms. Here, art imitates life, as the actors reiterated the collaborative process as much as the designers.

“We’re all learning from each other and we’re watching each other go through the same processes of getting damaged night after night by this war,” said Volpov. “In a way, we take the energy from each other, all the soldiers, and that’s kind of how we find [energy] every night.”

The trenches and the horror within them, according to Safai, are not the only parts to this story. Between the soldiers in the trenches, the horses in the mud and the family back home, all the characters bring different elements to the stage that come together to tell a broader story.

Though this play is set during World War I, that broader story is not about the war, according to actor Hayden Davies. The story is about the “the humans and the people that are there, and the relationships that they have.”

“The struggles and the trauma aren’t exclusive to World War I. … It’s a story about young people and everyone can relate to that,” he said.

Anderson’s sentiments echoed that of the actors.

“[The play] affirms life. We’re staging moments of connection inside of horrific situations. … Look here, someone has connected to someone, someone has had a conversation, someone has fallen in love. … That allows the audience to feel hope,” said Anderson.

“It’s actually a hopeful piece [where] we can affirm life, that life is worth choosing.”

Davies pointed out a line in the book and the play that epitomizes the grand message of the story — the connections, the moments of light that shine through in times of darkness. It’s said by Coté, a soldier in Robert’s company.

“I doubt we’ll ever be forgiven. All I hope is — they’ll remember we were human beings.”