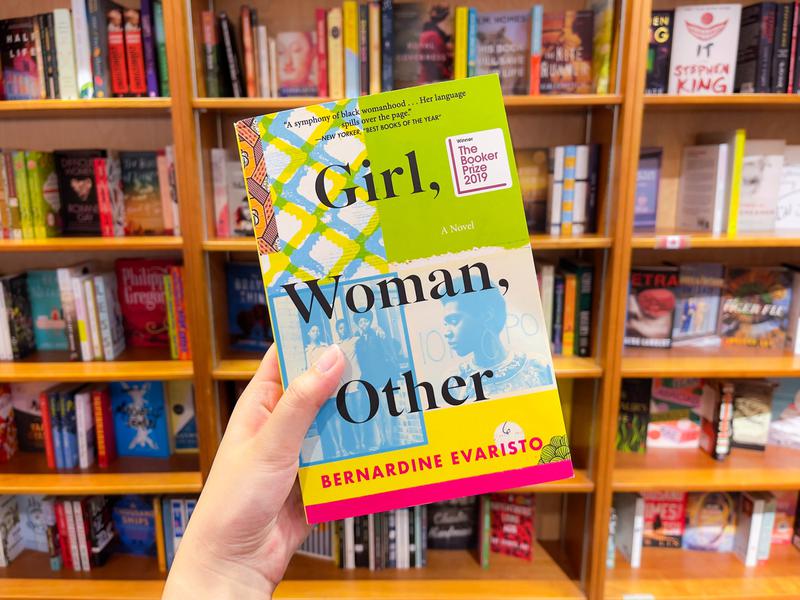 The book follows twelve characters, most of whom are Black British women. Isabella Falsetti

As an Afro-Latina storyteller, producer and activist, Santana spotlights stories which are often underrepresented in academic curriculums.

Girl, Woman, Other’s large and diverse cast of characters means that there is a lot to follow. As Santana says in the podcast, “I had to write down the different couples and how they connect with one another.”

The podcast begins with discussion about the character Amma, a Ghanaian-British lesbian, activist and playwright with a rotating cast of polyamorous girlfriends. She also has a teenage daughter, Yazz, fathered by Amma’s friend Roland (a conservative, Black and gay university professor, with a kinky private life).

The episode is a thoughtful discussion of Girl, Woman, Other’s strengths, weaknesses and intersectional themes.

It’s like a lit class socratic seminar, except all three participants are passionate, engaged and empathetic — and you don’t lose participation points when you just sit back and listen.

‘Blackness is not a monolith’

Social issues for the ensemble aren’t just confined to their colour — each facet of their identities and personalities impact the ways they move through the world, transcending boundaries to influence their lives.

“The fact that Blackness is not a monolith is one of the most important messages right now,” said Santana.

Within the label of “Black British women (/other),” Evaristo distinguishes between the voices of a teen mother trying to make ends meet, an elderly farmer, a wealthy banker who assimilates to succeed and a genderqueer Twitter celebrity, amongst others.

“Black women are so often portrayed as stereotypes or caricatures, or homogenized,” said Blaine. “To have these interwoven stories and characters who are beautiful and complicated was really evocative [and] inspiring.”

These diverse narratives build to create a novel that floods with intersectionality: the ways in which peoples' social identities — like race, gender and class — combine to create distinct experiences of discrimination.

In one conversation from the text, which Santana and company dissected on air, Evaristo explicitly breaks down the concept of intersectionality. Yazz, an outspoken Black middle-class college student and her white working-class friend Courtney discuss which one holds more societal advantage.

Courtney’s white privilege and her struggles as a first-generation college student don’t cancel out. They intersect to create a unified experience — one which still advantages her profoundly, even as she faces classed obstacles which Yazz does not.

Intersectionality isn’t theoretical. The characters of Girl, Woman, Other, and our podcast hosts, are working out the nuances in the moment, on the ground.

“Evaristo does not shy away from the stereotypical stories — the single mom, the young Black woman who doesn’t know her ancestry — but she gives them depth,” said Santana.

This differs from one-dimensional portrayals which often fail to address the underlying systemic forces which put women in positions of single motherhood or of uncertainty about their heritage.

“None of [Evaristo’s narratives] are trying to sell you a beautiful picturesque story, but they’re truthful to the essence of a life lived,” Santana said.

Girl, Woman, Other’s representations of womanhood, Blackness and queerness are not all rosy.

In the podcast, Blaine describes how part of representing marginalized characters as complete and complex humans is recognizing that all of us, including queer women, are capable of causing harm.

“In queer communities in general, there is a lack of conversation about sexual and domestic violence,” said Blaine. “It’s a lot harder for friends to notice those things happening.”

Evaristo’s inclusion of sexual and domestic violence in the novel sparks conversations, as seen on Diversity Reads, around an often-invisible topic.

Without representations of abuse or trauma in queer and/or BIPOC relationships, it can be hard to name it – let alone speak out about it.

As Diversity Reads’ lively dialogue demonstrates, Girl, Woman, Other is a good choice for a book club-type discussion because it makes complex themes accessible to a wide range of experiences.

If you don’t have friends that want to read and discuss books with you (same!), then Diversity Reads’ discussion of Girl, Woman, Other is a solid alternative.

Girl, Woman, Other highlights the hardship that the ensemble faces, but not without centering real and raw images of love. Diverse novels allow for the narratives of marginalized communities to be heard and further, appreciated.

Simply put by Blaine, “people need to see themselves represented, not only in positive lights but in nuanced lights.”