Review: Heathers: The Musical hits some of the high notes 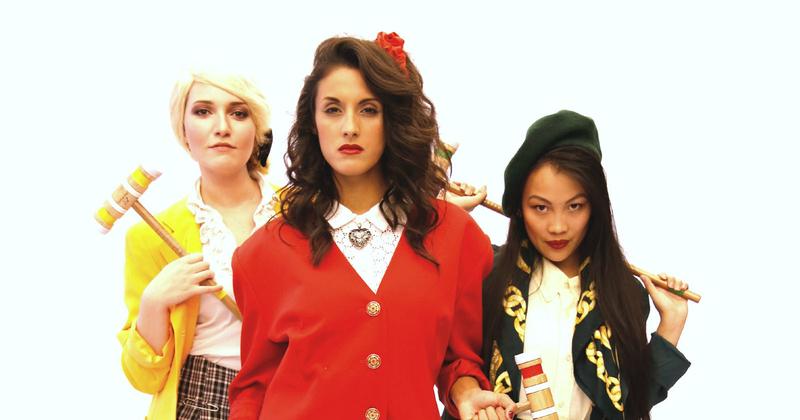 The musical was, at some points, a little unsettling. Photo courtesy Heathers: the Musical.

Heathers: The Musical is a very peculiar rock musical about… The toxic culture of masculinity? The dangers of groupthink? The comic possibilities of suicide? It’s hard to say, frankly.

The plot follows Veronica, a thoughtful high school student who falls in with the Heathers — a trio of popular girls who alternately terrorize and captivate their fellow students. After Veronica finds herself on the outs with the group, she doesn’t just sabotage the queen bee — she (accidentally) poisons her. She then forges a suicide note and gets away with the murder despite being haunted by the robe-clad ghost of her former best friend. What follows is an escalating chain of deaths, chiefly orchestrated by Veronica and her pseudo-philosopher boyfriend, J.D.

J.D. is a fantastic character: He wears Converse, spouts Baudelaire and acts like the terrifying extreme of the most obnoxious kid in your Arts One class. He is played by Kamyar Pazandeh, a Studio 58 grad with a fantastic voice and absolutely no sense of what to do with his hands. Many of the other leads suffer the same problem. They may be excellent actors or singers or dancers, but rarely hit the Venn diagram sweet spot of all three. Of course, some of these issues may be chalked up to opening-night hiccups and will likely improve with time.

The show’s standout is Steffanie Davis as Martha Dunnstock, Veronica’s pre-Heather best friend and the closest thing the show has to a moral centre. Unfortunately, Davis spends most of the show as a walking punch line, which does a disservice to her superior vocals and acting chops. Still, she does the best she can with the material at hand, gamely wearing a side ponytail while singing about saving her childhood crush’s scab in a locket (Kindergarten Boyfriend).

Particulars aside, this is a very strange musical for our current cultural moment.

The original 1988 movie Heathers satirized the Reagan-era after-school special, touching on date rape, suicide and bulimia with unflinching cynicism. The musical takes that as a starting point and cranks up the zaniness while peppering in choreography and power ballads.

The result is… weird. Although there can be power in using humour to defang taboo subjects, it seems a little unkind to gloss over serious public health issues with box steps and one-liners. There’s a fine line between satirizing a culture that doesn’t take date rape seriously and just plain old making a rape joke — it can be hard to tell where the show falls on that divide. This is difficult ground to tread and the script doesn’t always do a perfect job of it.

Still, there’s a lot to recommend the musical. It’s plucky, fun and allows a lot of up-and-coming actors to hop around onstage in colourful thrift store clothes. This would be a great show to see with a bunch of old friends to reflect on high school, the ’80s and then thank God that both those things are over.