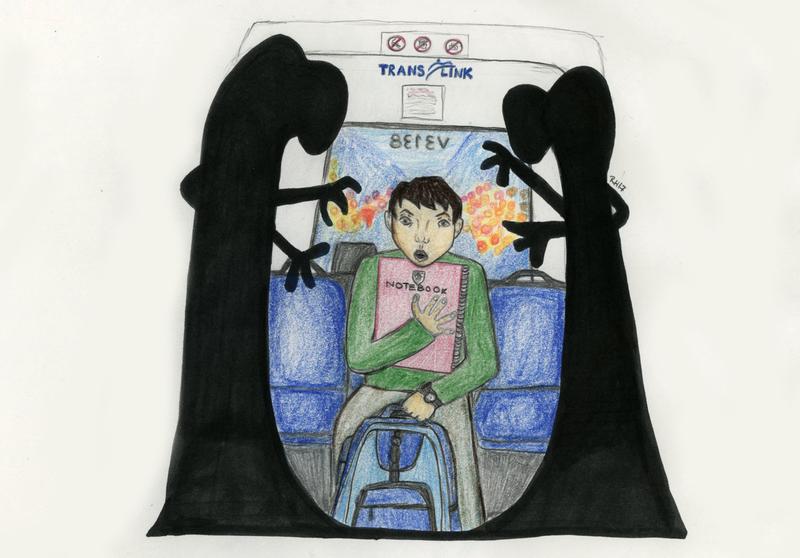 Years of exaggeration and misinformation were subverted by an interesting but entirely safe voyage through East Hastings.

Let me start off by saying something — I grew up in small- town BC, about eight hours from the expanse of the Lower Mainland. Even though I was far away, the infamy of the Downtown Eastside reached my ears at a young age. Growing up, my family would always speak ill of it, saying that it is where you go if you don’t get good grades, graduate and go to college. They warned me of drug addicts, thieves and ruffians who would kill you at the first chance they got.

Obviously, the truth of East Hastings is much more complicated and I wanted to discover that for myself. When my editor offered me this pitch, I was initially concerned. Could I write something that wasn’t simply poverty tourism? I reassured myself that I was a key player in this story as well, as I was undoubtedly going to be the butt of this intimidating joke. Either way, I couldn’t turn down a chance to see for myself what my parents’ pearl-clutching was about. A naive, wide-eyed kid from Castlegar should do great there, right?

7:28 p.m. We reach W Pender and Hastings in a bus that has been mostly vacated. When I take off my headphones, I overhear a conversation in progress.“Dominic! You know that ghost I was telling you about? It followed me into my new frickin’ house!” says a woman to her cohort. Dominic nods and expresses concern.

7:43 p.m. The 14 begins to go back towards UBC, so I get off and wait for the 20 at Pender and Hastings. I stand in the cold looking down the street. An ambulance whizzes past me going into the depths of Hastings. Right before the bus arrives, an old man walks down the street, swinging an aluminum crutch.

I’m not in Castlegar anymore.

8:09 p.m. Around me is a wide variety of people. Nothing too unusual until I see a man hork up a loogie and spit it into his jacket. At about Main and Hastings, a couple wobbles onto the bus. Firmly planted in the woman’s cheek is a toothbrush. She isn't brushing, just holding it there. Its green handle is clearly visible. The person sitting across from me is staring at me as if I don’t belong.

8:51 p.m. I am now in the back seat of a 16, going West. I have a good vantage point of the entire bus. There are a few forlorn looking people staring into their laps. Not a lot of movement.

8:58 p.m. A sign-spinner (he is holding a sign, so that’s what I assume he is) runs onto the bus and rockets right into the seat right next to me. He is holding a still-lit cigarette which fills the bus with the smell of tobacco. After two stops, the sign-spinner leaves as quickly as he appeared. In his place, he leaves the remainder of his cigarette.

9:05 p.m. A couple takes the place of the sign-spinner. They are having an argument about something. The man speaks loudly, eating out of a box of pastries between tirades. I quickly get off the bus and jump onto the next 16 heading east.

9:12 p.m. There is a woman who is transporting a particle board desk. It’s about three feet wide and looks like it is missing pieces. The woman waddles off the bus with the desk soon after I get on.

9:15 p.m. Things start to heat up. An angry man gets on the bus and says to the driver that all of his money has been stolen and that he is “fucking pissed.” He sits directly behind me. After a stop or two, another guy walks on the bus and tries to sit next to the angry man. But in his attempt to shuffle past into his seat, he trips onto the angry man’s lap. This starts a loud argument.

“Are you trying to sit on my fucking lap dude?” says the angry man.

“Hey, I’m sorry — I tripped. Calm down,” says the other guy. The entire bus looks on as this loud altercation unfolds.

“I don’t need you on my lap dude, that’s fucking gross,” says the angry man.

“Fuck off,” says the other guy and then, oddly enough,“Calm down.” After a few more expletives, the angry guy gets up and sits in the back. Crisis is averted, but my heart rate has accelerated dramatically. I refrain from taking notes so as not to draw attention to myself.

9:41 p.m. The bus arrives. A man who looks like Travis Bickle gets on and speaks to a woman. I observe him and take notes. He notices and begins to stare me down. He takes out the contents of a plastic bag to show them to me. I manage to look away before I am completely paralyzed by fear, acting like I wasn’t trying to eavesdrop. I think it was an electric shaving razor.

9:48 p.m. A man holding a bottle of lotion, a can of beans and a pair of woman’s mukluks gets on and catches Bickle’s attention. He is a calming presence.

9:53 p.m. Cruising through Main and Hastings, I see a man being arrested by the VPD. A fellow bus patron watches intently.

“Aw, fuck,” he says. The bus driver asks him a question.

“Probably for selling cigarettes or something,” he replies.

10:08 p.m. I am at the bus stop, waiting for the 16 to go back out again. At a nearby pot dispensary, I hear an altercation. Someone apparently threatened a man with a baseball bat. I listen to the 9-1-1 call that the guy is making. The bus arrives and I get on before hearing the end of the dispensary conflict.

10:22 p.m. This trip is uneventful. It seems to be full of commuters. I get off again at Nanaimo Street.

10:41 pm. My final journey through Hastings begins. I sit in the very back next to a completely hairless man. He gets my attention, asking if I want to see something. He and I end up having a very lengthy conversation. His name is Daniel and he is from Montreal. What he wanted to show me is his collection of newly acquired clothes that he got from a donation bin. Laid out on the seat in front of him are some pretty impressive finds: a Columbia jacket, an American Eagle sweatshirt and — the thing he was most of all excited about — a licensed Barbie toque. He talks about how he used to be a roofer and gave it all up to move to Vancouver. I don't ask why. I change the subject back to the clothes he got.

“Those are some great finds,” I say.

“Yeah man! I’m guessing retail for these is about $700,” says Daniel. I don't think that this is accurate at all, but who am I to say?

“Look at this jacket! You see that? Goretex, man!” He explodes with joy, hugging the jacket and wiggling in his seat. “I wanna keep this for my own!”

When Daniel’s stop comes, I am sure to ask his name and shake his hand. The skin is hard, calloused and scabbed — beyond leathery. He thinks my name is Justin, but I correct him.

“I once knew a man named Tristan when I was a roofer. Except it was Montreal, so it was more like Tristán,” he says and gets off the bus.

10:56 p.m. As Daniel leaves, three guys sit in the seats facing each other at the back, right near me. One of them has a teardrop tattoo and is eating a giant muffin. They seem intoxicated.

“You having a good Monday night?” I say yes and ask him in return. He says that it could be worse.

11:03 p.m. I get off the bus and head home. I’m done with my night’s journey and wisened for it. The Downtown Eastside hadn’t met my parents’ exaggerated imagery of druglords shooting heroin into unlucky passersby, but I was still vaguely uneasy the whole time. Why was that? The simplest and best answer I’ve been able to come up with is that my preconceived notions were completely unfounded. The “infamous” East Hastings stretch is not what it is painted as. It is not a place to be terrified of or a place you go when you fail your math course. It is a community of people who are just as much a part of Vancouver as we are.

In the end, the Downtown Eastside is an important place that helped me to understand what it is actually like to live in Vancouver, while not being able to afford it.