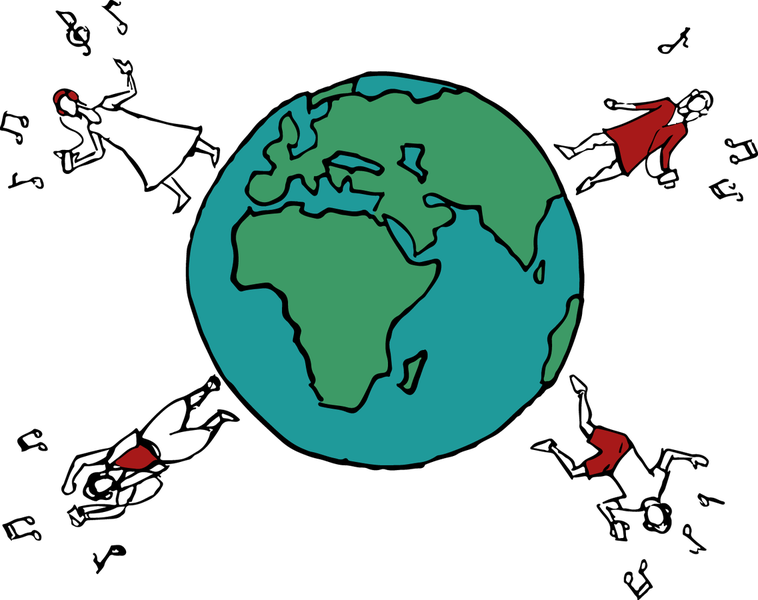 For many international students at UBC, music is a way to connect to them back to their home countries. Amrit Krishna

Music is a powerful tool. A single melody or a note can bring back a rush of memories and sensations for a person. For many international students at UBC, music is a way to connect them back to their home countries. For some students, there’s a certain song that brings them back to their childhood and their family. For others, a song can encapsulate their complex feelings better than words ever could.

Here are some examples from a few of the international students studying at UBC:

A warm ukulele begins the song, bringing flourishes of reds, oranges and blacks into Rolando Hinojosa’s mind. Tú sí sabes quererme means “You do know how to love me” from one of Lafourcade’s albums, which is focused on reinvigorating Mexican music genres.

“The instrumentations, the beats, the lyrics ... the musicality ... they’re all very infused by the Mexican songwriting tradition so it just instantly transports me to [Mexico],” Hinojosa said.

“Red is about happiness,” Ian Zhu said. “And also red is the colour of [the] Communist Party and this song represents the collectivism of the country ... it also reminds me of my family, my friends there.”

Yue Ming Xing’s house is near the Yellow River in the northern part of China which is why as soon as she thinks of home, this is the first song she thinks of. This song is about the love for China, more specifically the love for northern China.

“Basically, I saw the Yellow River every day of my life so I feel that kind of relationship to the river,” said Yue.

As Ruhullah Khapalwak walks to school, this is the song that he listens to, reminding him of home. The song is slow and rich as the singer sings about the beauty of the land and its history.

“It talks a lot about who I am and where I’m from,” Khapalwak said. “Even though I’m living so far away now, it takes me back. I can imagine my childhood and also the time that I had there and also hopeful for the future that I’ll be able to go back and raise my family and live there.”

This song is about the singer leaving his country to travel by himself. It’s a journey that Ina Nakyoung Lee has made a few times when she left South Korea to study in the Netherlands and then to Canada. While the song is surprisingly upbeat, Lee feels nostalgic.

“Right before you leave the place, you feel kind of bittersweet,” Lee said. “That’s why I feel ... the moment right before I left my country, it’s my feelings. It describes my feelings for my country.”

Ed Sheeran’s song may be about his girlfriend and how he uses the photograph he carries as a way to move on, but this is also a way for Matin Moradkhan to remember her family back in Iran.

“It somehow reminds me of my homeland and my family and relatives there. I always [carry] a photograph of them,” Moradkhan said. “I feel like I miss my family when I listen to it but there’s a kind of encouragement in the song as well which keeps me going.”

When Cinar Kiper thinks about Turkey, he doesn’t think of traditional Turkish music. Because he spent half of his time in the US and the other half in Turkey, his taste in music is a fusion of Turkish and Western music. Balkan Roma music is one of his favourites.

“Balkan music definitely makes me think of Turkey because that was my favourite type of music to hang out at local clubs [to],” Kiper said. “Turkish folk fused with jazz, Turkish rock fused with Turkish Black Sea regional music and Balkan music, those are my three [types of music] that kind of remind me of home.”

The title translates to “You’re Beautiful My Country” and it’s about how nice the country is and how you love it. It’s a song that calms Yahya Abdul Ghani. ‘Home’ for him isn’t something that he can easily describe: he grew up in Dubai but is from Iraq and Palestine.

Our Last Summer by ABBA

ABBA is the classic pop group of the ’70s. And when Aishwarya Abhiram is homesick, she plays this song.

“It was a good time,” Abhiram said. “Because days were longer and my mom and I would ... get ice cream all the time. It was also the time when my dad took days off work and as a family we would travel.”

Dil translates to “heart” and this song would translate to “My heart is all about Pakistan.” The singer unfortunately died in a plane crash in 2016. This was the song that Danyal Tariq grew up with. A smile breaks across his face as he hums a short excerpt of it.

“My dad was in the air force, he’s retired now, and so we grew up on these military bases and whenever there were these Pakistan days like 23rd March or the Independence Day, we’d always have this song playing.”

There’s a calming effect to the singer’s voice as she sings. While the song is about a person, it’s also how Ely Bahhade thinks about his country — it’s something that he loves and cherishes. The lyrics talk about a tree which sways with the wind. However, with the crisis happening in Syria, this song takes a whole different meaning.

“There’s a huge wind that came which is the crisis that shifted everything away from [the tree’s] growing up,” Bahhade said. “Instead of growing up, it’s kind of shifting it away.”

The first song that came to Leah Siegel’s mind as soon as she thinks of USA is Timber.

“I think when I think about home, I think of comfort and good memories and stuff and that came out in my senior year of college and we played it at all the parties.” Siegel said. Then she laughed, “I also think the message it has is funny because one might make that case that the direction of my country is [going down].”

The House that Built Me by Miranda Lambert

This is the song that brings Sofia Santamaria back in time to when she was still living in Venezuela — to a time of pink walls and decorated rooms. This is where 10 years of her memories are stored. And while it sometimes makes her feel sad, it’s also a song that makes her reflect.

“This is where I grew up,” Santamaria said. “But this is also not where [I] became [the person that I am today] because I’ve grown so much.”

To listen to the international student playlist follow this link.