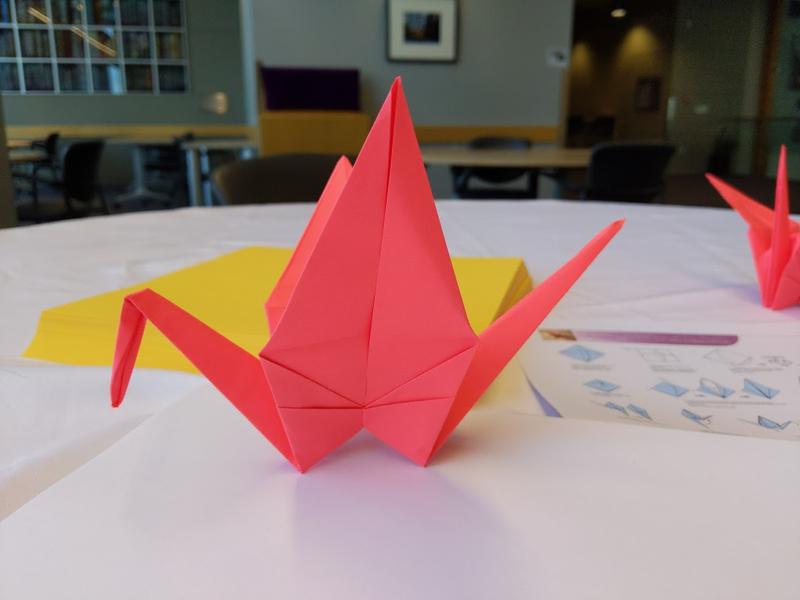 The group's work was part of an event to realize Tiffany Wu’s vision for an outdoor art piece. Andrew Ha

With 4 hours, 10 paper colours and a 2,000-crane goal, on August 28 a handful of students set out to create a hanging origami installation for next week’s UBC Pride. However, the ally-dominated event revealed blanks left uncoloured by the very community it advocates for.

The group’s work was part of an event to realize third-year computer science student Tiffany Wu’s vision for an outdoor art piece of multicoloured paper cranes and hummingbirds floating above a walkway, forming a small sky over the heads of passersby.

“I think [a crane] basically means good luck and happiness, and I wanted that to reflect Pride,” explained Wu.

Wu, won the “Love is in the Air” contest held by Campus and Community Planning (C+CP) which called for proposals of artwork “inspired by colourful pride roofs across the world that help elevate the voices of LGBTQ2SIA+ communities.” The winner receives $1,000 for “materials and equipment” to produce the piece and $2,000 to keep as a prize.

Wu made her submission after seeing a poster at work.

“We had some people submit entries of what their ideas are … This [installation] was Tiffany’s idea,” said sixth-year psychology student Crystal Lau at the event, who is on a C+CP co-op placement. Lau identifies as straight.

When asked what inspired her to apply for the project project, Wu said “I wanted to practice my design skills and it was something that was part of me, so it just made sense to enter.”

For the design, Wu was inspired by the colourful art displays in Montreal’s Gay Village. As for the idea of using cranes, “it had to be really light,” said Wu, “and it symbolizes good luck and happiness and other positive meanings.”

After UBC’s snafu in which it allowed a transphobic speaker on campus that resulted in its removal from this year’s Vancouver Pride Parade, Wu said that campus still welcomes LGBTQIA2S+ students despite the university’s actions.

“I’m not sure about how UBC supports [LGBTQIA2S+ students], but I think the students’ organizations are pretty supportive. At least most of the students I know are pretty welcoming,” said Wu.

The installation will feature many different pride flags, like the rainbow with black and brown stripes as well as the bisexual, asexual and trans flag colours.

The installation hopes to continue that support as it anticipates the unveiling of the project at UBC Pride next week. The origami birds in their rainbow livery will decorate fishing lines strung across four lamp posts at Fairview Commons by the Earth Sciences Building.

“I just hope that when people see it they can see something that reflects them,” Wu said.

Wu held the event at the Irving K. Barber Learning Centre with around 10 friends and co-workers folding away. The modest group recalled a knitting circle, hands creating not blankets but birds, the pace of folding bringing into question the attainability of the event’s goal.

Wu said that the August 28 event was “pretty last minute” and even after the event, there are still many cranes to fold. Further folding will take place at the UBC Pride event on September 6.

The airy and soon-to-be lofty cranes, however, reflect the project’s lack of public awareness. The work of LGBTQIA2S+ allies and support from the university administration is important, but their unclear message leaves the question of whether the shade under the installation will allow the community to sprout.

But the ambitious project may still set precedent in another area at UBC — students will see cranes that, for once, are unrelated to construction, taking flight in blissful silence.

— With files from Thomas O'Donnell

This article has been update to correct information the artist of the project. The Ubyssey regrets these errors.