Memoir: Long-distance dating and missing out on first year 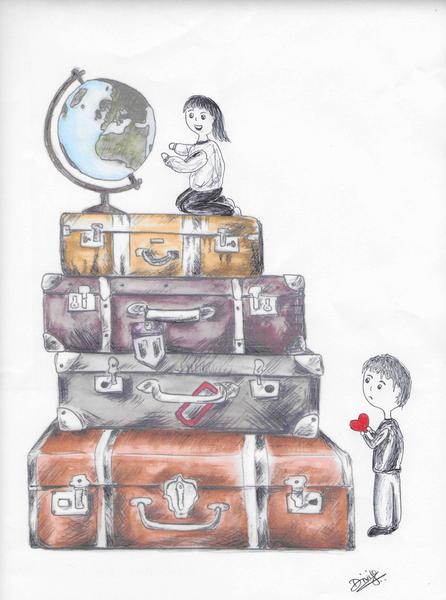 This is what a good part of my first year looked like: staring at a computer screen most nights, sitting alone in my room talking to someone who isn’t even there, lots of crying, lots of fighting. It was not a pretty picture — unfortunately, I was the only one to blame for that.

Before coming to university, I had been in a relationship for about a year with someone back home in California. I was head over heels for this boy and – even though I was moving to an entirely different country – I wanted to do everything in my power to keep him in my life. I knew that being in a long-distance relationship would be hard, but I figured since we had been together for a while and since I was staying in the same time-zone, I could manage it.

Plus, this was only supposed to be temporary because he said he wanted to move to Vancouver to be with me. I was so confident in this relationship that I had absolutely no doubts going into it that we would be successful.

When you tell people that you’re starting university in a long-distance relationship, they usually tell you all the same things:

“So you’ll be single by January then?”

“Do you seriously think that will work?” and so on.

I would always just laugh it off, because what do they know, right? They didn’t understand this connection we have so of course they couldn’t possibly see how we would make it work, but I knew we could. We’d be the exceptions and push through it.

The first two months of my long-distance relationship weren’t too bad. We both had our own lives going on in separate cities but still made time to FaceTime each other nearly every single night before bed. I was able to have my life at university and this relationship from back home. At least, that’s what it seemed like at the time.

Looking back, I can now see all the faults that this relationship had from the start of it becoming long-distance. I would leave dinners early just to see my boyfriend; I would skip fun club and first year events to see him; I would always prioritize talking to him over everything else.

At the time, it seemed like that was working and it felt like the right thing to do. It seemed healthy and supportive. But now, I realize I was missing out on so much because of this relationship. I couldn’t wait to run back up to my dorm to talk to him, but when I did that, I was blowing off the new friends I had made. When I would decide to stay in and FaceTime my boyfriend instead of going out to a stand up comedy event or a club icebreaker, I was essentially choosing to not have a great first year experience where I met new people and tried new things.

Over the first few months I became dependent on this relationship. As school went on, my schedule got busier and what little free time I had was spent talking to my boyfriend instead of going out with friends. When I couldn’t talk to him for whatever reason, I felt lost. I didn’t know what to do with myself when I wasn’t on FaceTime. My friendships eventually faded and I had no other connections or involvements to fall back on. My first year eventually became just me and my long-distance boyfriend.

But I was too stubborn to recognize this dependency.

I wanted so badly for us to be the exception, for our relationship to be special. I remember telling myself that I had to make this work. I couldn’t just give up. I had put so much time and effort into this person, into this relationship – if I quit now, I would just prove everyone right.

At this point I was not only prioritizing him over everything, but I was also putting my pride over my own well-being and happiness. I couldn’t admit to anyone — not even myself — that this wasn’t working anymore, and that I was slowly becoming more and more miserable by trying to sustain this relationship. I thought this was the only thing that could make me happy, when in reality, it was the one thing preventing me from actually being happy. I idolized him to a ridiculous level. I saw him as my everything: my only support system, my one and only best friend, my source of confidence and happiness.

This wasn’t healthy and ultimately it’s what brought the relationship to its explosive end.

I know that this was not a one-sided experience, however. As December approached, I found out that my boyfriend had been ditching parties or even putting off studying for exams just to talk to me. When he told me this I was shocked and disappointed. I told him he shouldn’t do that, that he needs to have balance in his life and should go to these parties and study for his exams when he needs to.

While I was right, I was also being hypocritical because I was doing the exact same thing and refused to acknowledge how unhealthy it was. We were both prioritizing screen time with each other over real experiences around us, things we wouldn’t get a chance to re-do or experience again, at least not in the same way or same context.

When December came around and I was able to go home for the winter break, I had this sense of relief the more I saw him in person. Seeing him reminded me why I had even attempted long distance in the first place and my confidence skyrocketed.

Yes, that was it for me. He was the person I wanted to be with. Why the hell would I want to give that up?

Before leaving, we promised each other we would stay together and love each other no matter what.

However, the moment I came back to UBC, it all came crashing down in a blaze of fury.

We started fighting every time we talked to each other. It was over little things at first – usually about some miscommunication – but eventually these fights became about how we treated each other or even who we were as people. They were very personal and intense fights.

We hit a breaking point towards the end of January when we had such a bad fight that we couldn’t even come to a resolution and it was drawn out for days. He was the one to call it off in the end. I remember ending the FaceTime call and immediately throwing away everything from that relationship: letters, pictures, gifts. I got rid of all of it, gutturally sobbing the whole way through. I could barely see through the tears and it was so hard to breathe; but looking at these reminders made the pain so much worse, I had to get them away from me as quickly as possible. Any hint of him was enough to bring me to tears.

That break up was crushing to me. I felt defeated and ruined. I had put so much love, time and attention into this relationship and at the time it felt like that had all been burned down in a matter of weeks. But now, I realize this break up was more of a long, slow-burning fuse with an intense explosion at the very end.

It didn’t begin ending during those last three weeks, it was when the dependency started.

Admitting this to myself has been extremely difficult. I had always seen that relationship as healthy and supportive; to realize now that this was not the case, at least while we were long-distance, is heartbreaking. But I’m glad that I’ve grown enough to see and accept the bad parts of this relationship. It has provided me with a new perspective on relationships that I didn’t have before and for that I’m grateful.