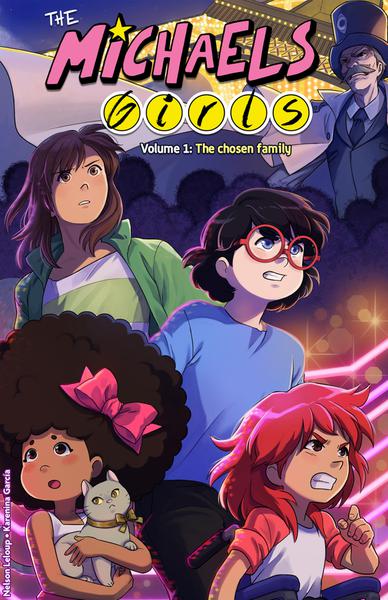 Leloup’s hope is for children to feel validated by seeing themselves and the people around them represented. Ana Karerina García

The Michaels Girls: The chosen family is non-binary French UBC student Nelson Leloup’s response to the lack of diversity and LGBT representation in children’s literature.

Leloup is a jack-of-all-trades. Along with being a second-year student, they’re a writer, producer, director, actor but above all, a creator. Initially in the film production program, they realized their true passion lies in writing. So after taking a semester of creative writing courses, including an intro to writing comic books, Leloup came to the conclusion that their vision and creativity could not be contained within a single conventional major, and they are now considering an interdisciplinary degree.

After growing tired of seeing the same white, able-bodied, straight, cis-gender characters on screen, they wrote a pilot script representative of themselves, their friends and their story. However, it was shelved by their agent due to its “progressive” nature, so they recruited a Latinx illustrator to bring The Michaels Girls: The chosen family to life, in the form of a children’s queer comic book.

In The Michaels Girls: The chosen family, four girls from the present must travel back in time to Paris to save their fathers who’ve been captured by an evil villain. Along the way, the four girls get into all sorts of mishaps and adventures, all the while discovering what it truly means to be a family.

What is so special about this comic is the abundance of diversity and representation. This includes characters of diverse ethnicities, orientations and genders, one character with disabilities and even a transgender cat.

“There’s one girl that’s disabled and Asian, one girl that’s half-Latinx and half-white and also queer, you have another that’s Black, and the last girl is… going to come out as non-binary during the book.”

Throughout the book Leloup poses the question, “What really makes a family?” Inspired by the chosen family idea — a group of people one is emotionally close and consider ‘family’ even though they may not be biologically or legally related — that is prevalent in the queer community, Leloup challenges the normative definition of a family by creating characters that are unrelated, yet deeply intertwined in each other’s lives.

“Blood doesn’t make a family. Love does. If you have love, you have a family and I think that’s what the book is all about.”

Leloup’s main goal with the book is to entertain readers in an informed way. Leloup’s hope is for children to feel validated by seeing themselves and the people around them represented, to understand that what society projects as the norm is not the only way to be and that there are no limitations to what you can become or what you can do. This is all through a captivating story for both adults and children with vibrant colour and animated illustrations.

“What’s most important is loving yourself and accepting the love of others.”

Leloup credits their ability to balance both school work and writing to two things: prioritization and passion. Writing doesn’t feel like work to them. They’ve learned how to incorporate it into their daily life and consciously chooses it above all else.

“I’ve learned how to write anywhere at any given moment. If I have five [minutes], I’m going to write. It’s about knowing how to balance everything.”

Authenticity is paramount for Leloup, which explains their choice to self-publish. It enables them to create something that adheres to their vision, without having to compromise their artistic integrity.

“I ... think there’s such a power behind self-publishing because it’s you [going] directly to your audience ... There’s something very strong about that.”

To achieve the comic’s January 2020 release date, a kickstarter campaign for the book will begin on September 2. This will allow Leloup to reach their audience directly and show publishing companies that there is a demand for queer content.

Leloup’s tenacity to self-publish diverse and representative content is setting a model for queer writers and audiences everywhere. There are no limits to creativity, no normative boundaries that cannot be broken and you can be heard if you are willing to make enough noise.

“Never tone down your creativity ... to please mainstream audiences,” they said. Find a platform to write on and if you can’t find one, build one.”