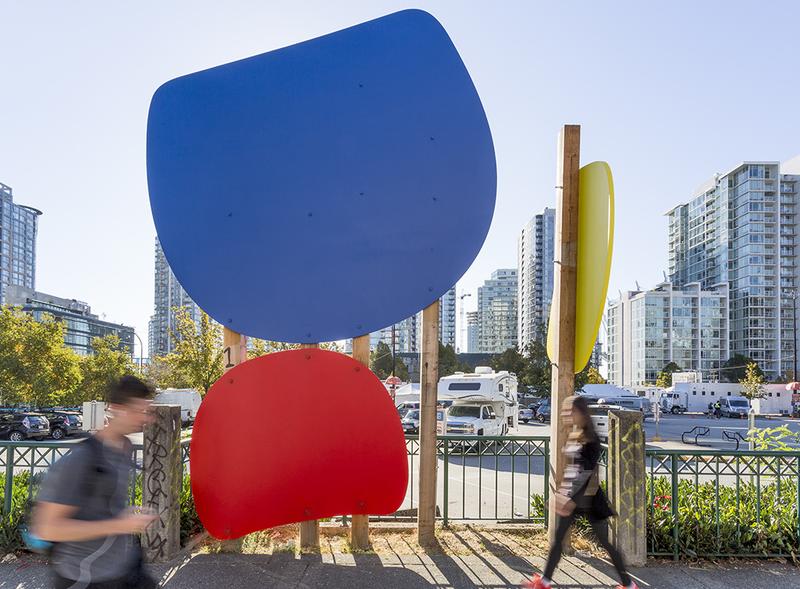 Larwill Park is a parking lot located on the corner of West Georgia and Cambie which will soon be the home of the new Vancouver Art Gallery building. On September 22nd, artist Lawrence Paul Yuxweluptun unveiled a series of latex paint and laminated plywood sculptural pieces installed throughout the lot, entitled Ovoidism.

The ovoid form is often used to make patterns and figures in traditional Salish art, a people from whom Yuxweluptun is descended, in addition to his Okanagan heritage. In this work, Yuxweluptun abstracts the ovoid by removing its layers and presenting it as a complete and separate entity. He challenges the way in which Indigenous art is represented and judged in a formal, Euro-centric context. By doing so, he reclaims his right to construct an Indigenous identity outside of colonial narratives.

The largest of Yuxweluptun’s outdoor installations to date, Ovoidism immediately draws the attention of many passersby. The vibrant colours of the ovoid forms contrast greatly with the monochrome surroundings of Downtown Vancouver. The forms float freely in space, denying any sense of hierarchy — the scale of them dwarfing viewers. The sculptures successfully mark the space for the changes to come, while reminding us of a colonial history that must not be forgotten.

During the process of creating an installation for Larwill Park, members of the Vancouver Art Gallery met with a number of artists to hear their proposals for the space. It was Yuxwelupton’s work that stood out through its commitment to acknowledging Vancouver as the unceded territory of the Musqueam, Squamish and Tsleil-Waututh Nations.

“[Yuxweluptun] talked about it being a watchful eye that is present and persistent in the land. It struck us all, kind of immediately, that that was what we needed to set the stage for things coming. To always be aware of that history and we were being watched over with our responsibilities. The other proposals were fabulous, but this was the only one where everyone said, ‘We have to do this!’” said a Vancouver Art Gallery curator.

Ovoidism is the second installation organized by the Vancouver Art Gallery at Larwill Park, in partnership with the Other Sights for Artists’ Projects. Though the space looks unremarkable, the park has a long history of serving as a communal space for Vancouver. Larwill Park was Vancouver’s second sporting ground, has been used for political protest and was also a site for military drills during World War I and II. It was later converted into a bus depot through a city deal, and has since been turned into a downtown parking lot.

The new Vancouver Art Gallery intends to return the site to the city so that it may become a community gathering space.

“Next June, there will be six or seven First Nations typologies, or buildings, that speak on the concept of reconciliation and First Nations inhabitation,” said a source from the Vancouver Art Gallery. “Continued presence of the ovoid forms will contribute to that dialogue. This will coincide with Canada’s 150th [anniversary] celebrations.”

Fittingly, most of the time during the Ovoidism opening was given to the voices of the First Nations community. The Coastal Wolf Pack, a traditional Salish song and dance group, performed a number of pieces to welcome the community. Alec Dan, Yuxweluptun’s brother in law and a member of the Coastal Wolf Pack, explained the significance of each of the pieces.

Ovoidism will watch over Larwill Park until September 25, 2017. The Vancouver Art Gallery plans to begin construction on the new building in late 2017.