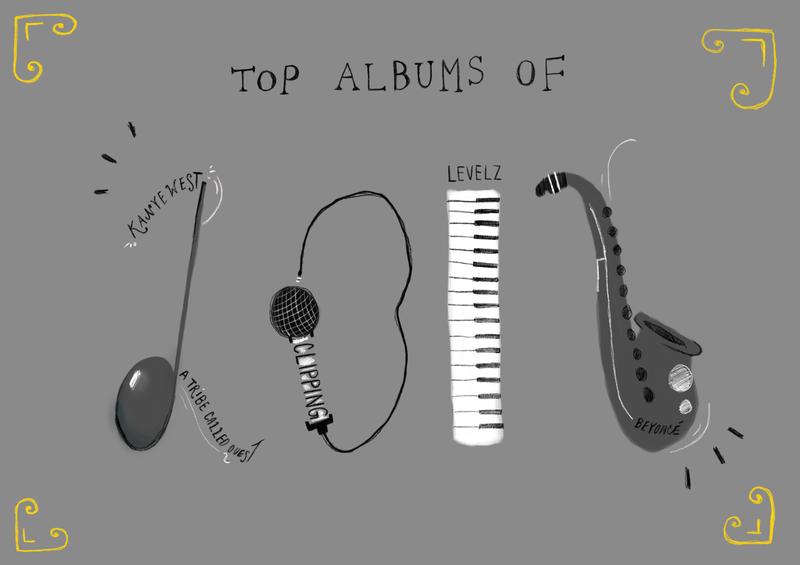 Our resident bearded music aficionado stamped out his best of the best albums for 2016 into a fancy listicle, because that's what the kids are into these days. Aiken Lao/The Ubyssey

I can count my friends on my hands and toes, and I'll never be overthrown.

It's only right that I should start the list to get my “indie” pick out of the way, who happen to be a thoroughly British set of artists. One of the things that made 2016 not quite the most irredeemable year on record was the resurgence of British Grime. Skepta shut down the charts with Konnichiwa and won the Mercury Music Prize for his efforts. Chip and Yungen’s diss tracks provided a war narrative more engaging and more real than anything on Game of Thrones. Within its first two weeks — before the entire year went to shit — Manchester collective LEVELZ quietly dropped the best British Grime album of the year.

With nearly every track a posse cut, the real achievement of LVL11 is introducing the personalities of each MC — Skittles, the maniac freestyling machine; Chimpo, the gentle giant comic relief; and Black Josh, the skittish upstart to name a few. This is a hard task considering the MC's lack of pop chops. But the gruff, shouty, sleazy hooks earworm their way into your ears, aided in no small part by the distinctive production that recalls two-step, reggae, g-funk, dubstep in its bitches brew. These are the gateway drugs for the real addiction — the mile-a-minute rate of bars, punchlines, subliminals dropped by each rapper. Singles “LVL07,” “LVL09” and “Rowdy Badd” are bombastic showcases — the posse not so much murdering the beats as hanging, drawing, quartering, crucifying, resurrecting and killing again with aplomb, but the real treats are to be had in the deep cuts. The raucous party animals of the album are “Bow Wow,” the drunken, wobbly, sloshy 4 a.m. vibes of “Worship,” and the morning after confession of "Slow Down.” Turn LEVELZ up — it’s stuff that deserves to be played loud.

When Beyoncé's self-titled 2013 album premiered, headlined by “Drunk In Love,” she was dominating. Jay Z’s lackluster verse on that song, as well as the ultimately forgettable Drake and Frank Ocean features (fight me) only served to distract from the main event. In this case of “Drunk In Love,” it serves as a reminder of how outdated and plain bad Jay sounds next to his wife. Of course, back in 2013, we did not know just how bad Jay would turn out to be. Beyoncé’s part-love letter, part-revenge fantasy, all explicit LEMONADE fully realized the audio-visual potential of Beyoncé, and also acted as a radical affirmation of blackness and femininity — and most importantly, womanism — in the face of demagogues and deplorables that worked to demonize both.

Although I could gush about LEMONADE's visuals and poetry for the remainder of this write-up, it deserves a spot in the top five based on its musical content alone. The narrative — chronicling intuition, heartbreak, rage, jealousy, denial, acceptance and reunion within its runtime — might come across as overstuffed or cliche if it wasn’t for Ms. Carter’s voice at the centre. It is as raw and hollow on the opening, “Pray You Catch Me” as it is grieving and melancholic on “Sandcastles,” as it is confident and proud on the closer, “Formation.” “Formation,” although released as a promotional single, acts almost as an encore on LEMONADE — the post-credits sequence or victory lap after “All Night.” But the album finds its natural end earlier for me, on the track “Freedom” — she speaks to her own freedom, but also the disparity between her female freedom and the freedoms afforded (or, in the greater instance, not afforded) to the mothers of Trayvon Martin, Eric Garner and Michael Brown: Sybrina Fulton, Gwen Carr, Lesley McFadden. But through their agency, their racial identity and their acts of refusal — in her words — they are bulletproof, they are true and they are new.

I can't go back home ’cause I want to be free. Someone tell the others what's become of me.

Look, I LOVED Hamilton. I loved it all! “Non-Stop?” “Guns & Ships?” Dope shit! But after the initial hype, looking at it in the context of the “Whitelash” that dominated 2016, I couldn’t help but think more critically about what Lin-Manuel Miranda presented. It’s a radical notion to depict a diverse cast of African-Americans, Latino-Americans and immigrants as the builders of American Freedom, but is it ever right to glorify the founding fathers, people who wept for freedom even as they held literally hundreds of humans as slaves? Hamilton shies away from that question, reducing the question of slavery to a punchline or two. It’s hard to sing along to Thomas Jefferson’s showstopper “What Did I Miss?” not simply because I’m tone-deaf — although that certainly is an issue — but because I know that Jefferson continuously raped his slave Sally Hemings over the course of her life.

But Daveed Diggs, the man who portrays the rapist in question, also quietly created with his fellow members of clipping. — Jonathan Snipes and William Hudson — a counter-narrative to Hamilton’s historical romanticization of slave-owners, putting the voice of a slave at the forefront. Splendor & Misery, which is only the outfit's second release of 2016 (following the excellent Wriggle EP) is set on an isolated, slave-commandeered spaceship in the not-too-distant future, amidst the aftermath of a violent slave rebellion in outer space. Typing that out, it sounds ridiculous — not even mentioning the relationship cultivated between the unnamed entity and the onboard computer unit — but I can promise you that listening to Digg’s skittish flow dancing over the radio static of “True Believer” and around the slave spirituals of “Story 5,” it’s real and revolutionary. As the oft-repeated comment says on the YouTube stream, “Where were you when clipping. released the greatest sci-fi novel ever written?”

My n***a spirit be talkin' to me, let me explain, / Not through evil mediums, tarot cards, and Ouija games / But through mixing chords and boards / And even drum machines — he be saying: / N***a fuck awards, keep reppin’ Queens

Well, who’d have thought it? Following the election of a demagogue and the loss of one of its forming members that would’ve left a lesser group reeling on the ropes, A Tribe Called Quest came back swinging harder than ever. The black community is here in spades — Q-Tip's in-house studio holds guest to Busta Rhymes, Anderson .Paak, Talib Kweli and Consequence, coming out of the woodwork to craft something that stands both as a sign of the times and a tribute to moving forwards in the wake of unbearable tragedy, both personal and political.

From the first scatterbrain AK-47 flows of “The Space Program,” it’s clear the Tribe are gunning for blood. Whether their targets are mumble-rappers, politicians, or even abstract concepts like the Ego or the cruelty of death in “Lost Somebody,” the Tribe hit 100 per cent of the shots they take.

None of the songs end easily — their natural flow is interrupted by an oddball sample, or cut-off by the solid wall of sound crashing into the next track. It makes the album sound unfinished or poorly edited. Here is my interpretation — when someone leaves your life, there is no fade away or resolved chord. It feels like they have been violently ripped from your life's narrative — that there wasn’t enough time for them to fully explore their potential. Much has been written of the impact of Phife Dawg’s death, but perhaps nothing expresses the effect that the tremendous loss of his life being cut short has had on hip-hop better than when the samples and songs on We Got It From Here… follow suit.

You can never go too far when you can't come back home again.

I went to church for at least seven-ish years as a Catholic kid. I learnt the values of belief, love, devotion and above all truth. So please believe that I speak truly when I say that listening to “Ultralight Prayer” and “Ultralight Beam” in the first seven minutes of The Life of Paul brought me back to those seven years of church. That sounds like an unholy hyperbole, but honestly, having this music during a period of my life when I was furthest from a sense of home or community was invaluable. And yes, that sounds ridiculous. To put The Life of Pablo in the same type of politically charged hip-hop as the 2016 releases of Beyoncé, clipping. and A Tribe Called Quest would do a disservice to all four of these artists. But The Life of Pablo doesn’t have to be political to be real. The reverence of “Ultralight Beam” is real. The paranoia of “FML” is real. The cloud of doubt and hollow performance that overshadows the Life of Pablo is real — at least to me. All of this becomes more real with context of West’s hospitalization, his mental illness, his waves of haters, his debt (?), his contact with his wife, and his children's birth and growth. The Life of Pablo is a confusing mix of honesty and frustration (“Real Friends,” “Wolves”) masked by massive displays of bravado and performative masculinity (“Famous,” “Highlights”) that hopefully marks a progression towards some kind of realness.

The edited version released by Dorian Ye on Reddit, The Life of Paul, only serves to compound these ideas and reveal the layers into Kanye’s soul. Using elements of each fragmented release, live performances, leaked demos and original samples, The Life of Paul transforms an engaging look through the egotistical celebrity psyche into a work of art. Nothing is added that could not have come from West’s original production, and so The Life of Paul stands as a fascinating “what if ?”

The Life of Pablo is not the most political, the most cohesive, nor the most tasteful album released in 2016. It is not the greatest artistic expression of 2016. But it is the most real album released in 2016. There is no dirty detail sanitized, no word left unsaid and through Dorian Ye’s editing, no musical idea or sample left unfulfilled. The Life of Pablo is not outselling My Beautiful Dark Twisted Fantasy, but poses as a cautionary tale of the college dropout who got too far and needs to come back home again. He needs faith. He needs more. He needs to be safe, but he is still at war.