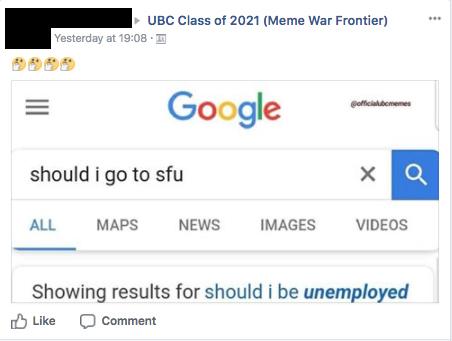 Memes and gifs — the primary method of communication for 2017. You’ve all seen them: Grumpy Cat, Pepe the Frog, Matthew Lewis’ puberty... the list is endless. Be it amongst friends or in a professional setting, the meme is ubiquitous.

Richard Dawkins coined the term “meme” in 1976, describing it as an attempt to understand behaviours that make no sense from an evolutionary perspective but are widespread in human culture.

The internet of the 21st century has since hijacked it, run away with it and done its damn best to live down to Dawkins’ expectations.

Why are memes so widespread?

“They’re entertaining, they’re accessible,” said UBC Professor Kedrick James, who specialises in linguistics and media. “People can produce them and their visual communicative dimension is starting to dominate. You have a phone, you can access the memes. … It’s cross cultural, there’s text, but only people who are in on [the joke] will get what you’re referencing. At the same time a specific meme is only understood by certain people — say, older adults won’t understand your meme jokes. They’re for youthful communication, for those under 40 — creating a sense of community. People bond over finding a certain meme funny.”

Additionally, memes transcend cultures — while most of the text is in English, the context within the meme is easily understood to everyone who is “in the know.” This helps to form a community of diverse, multicultural people who have never met before.

You probably think you know what hieroglyphs are — pictures that people could somehow read, kind of like the world’s best lit class. However, hieroglyphs were mainly a sound-based language, using a pictorial form of writing.

“For example, in English,” said Professor Thomas Schneider, an expert in hieroglyphs, “you have the sound ‘BR,’ you’d have, say, a bear’s head for that. And then if you wanted to write ‘beer’ you’d be drawing a bear’s head, then a picture of a person eating.”

Not quite what memes do, but there are similarities, in that they’re both mediums of communication with pictures and text.

“The text combines with the illustrations … [and] forms a whole,” said Schneider.

Another shared characteristic of hieroglyphs and memes is the communities that are formed around them.

Hieroglyphs were only available to a select few; scribes, artists, delegates, kings — that is to say, the upper class. And specifically among the artists who used hieroglyphs, a community formed.

Deir el-Medina was a city — lasting throughout two and a half centuries and multiple monarchs — of artists and professional workers in Thebes. It was quite progressive for its time, as several women were included in their number — most, if not all, of whom were literate. These artists were tasked with making Pharaoh’s tombs and when they weren’t doing that they were decorating their own would-be tombs — or possibly snorting ancient cocaine.

“There are definitely some similarities,” Schneider said. “There’s aesthetic value to pictorial forms of communication.”

Aesthetic value and the richness of images as a form of communication — so effectively implicated in hieroglyphs — are traits that have been carried through into the age of internet.

Will memes have a lasting effect?

“You can see this in a non-graphic form. What am I talking about?” said James. “Twitter.”

Twitter began as a popularized way to form social bonds online, in a bite-sized format. It has since had a large political impact.

“Now you wouldn’t even think of being a public figure without Twitter. Some people are saying that Twitter’s one of the reasons Trump won,” said James. “The same could be said for memes — now, things are censored on official websites, but memes are open to the public, easily made and spread. There are memes of these public figures.”

I told James that the first I heard of Trump was through a meme declaring him a Cheeto.

“There you go, that's exactly it,” James said. “They stick in people’s minds, and have an effect.”