Sensored and Synthesized: A combination of music and technology 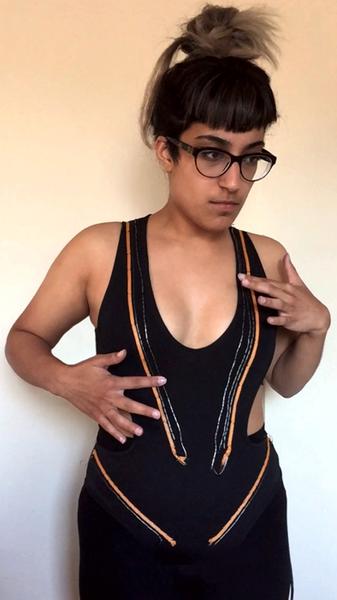 Singer and music director Marguerite Witvoet recently appeared at the October 2016 Sensored and Synthesized concert, wearing what appeared to be a plain unitard. This seemingly ordinary unitard — completely black, save the neon-orange lines running through the torso and hips — was Kiran Bhumber’s newest research project: a reactive body suit.

“About 10 months ago, Kiran asked me about how you would go about making a sensor suit,” said researcher Bob Pritchard. “We emailed back and forth, and after a few weeks, we decided we should build it.”

“I was trying to think of how the body could fully embody an instrument,” said Kiran Bhumber, principal researcher and alumni of the UBC faculty of music. “Like a violin body, you have the strings and the body of the instrument. That’s the idea of the body suit.”

How does the suit work? The neon strips running through the suit are the key to its success.

“Depending on where you touch, the voltage change varies,” said Bhumber. “We have parallel conductors running through the suit. When you have something conductive touching those areas, you create voltage change. From there, we could use that data range to map that onto sound.”

The concert itself, being a part of the larger WAVE EQUATION Electronic music series, aimed to explore new and unconventional avenues of music and art to challenge the audience’s senses. Said audience, most of whom were artists in their own right, entered the concert hall with no idea what was in store for them.

“I don’t know what to expect,” said Carly F., an artist recently arriving from Australia. “But I’ve come here to be inspired.”

Bhumber’s performance didn’t fail to deliver. It was the second out of three, following an intriguing cello-based noise music piece. The spotlight focused on Witvoet, Bhumber working on the computers behind her.

Witvoet began in a strong alto voice, playing the character of a jilted lover to perfection. Intended to be what Bhumber describes as “an exploration of memory and loss,” what made the performance unique was the eerie echo that accompanied her song as she slowly ran her hands over the suit.

The song started out slowly, with Witvoet singing a solo story about a close lover. As the lover started to distance themselves, Witvoet’s character became more desperate, chanting, “Where do I fit in? See me.” The enraptured audience was then startled by a haunting, disembodied voice echoing Witvoet’s lyrics. “See me,” echoed the voice that simultaneously came from every corner of the room. The accompanying instrumental music increased in volume, corresponding with Witvoet’s movements as the song rose towards its climax.

At the halfway mark, the technologically engineered voice began developing a life of its own. “You will see me,” said the suit’s mechanisms, no longer merely copying Witvoet as the singer belted out a soulful, “I am forever changed.”

Witvoet’s performance, lasting a good half-hour, was greeted with uproarious applause. “That was beautiful,” said one audience member to the performers. “Absolutely haunting.”

“I’m proud that we got [the performance] all together,” said Bhumber after the show. “I’m very happy with it.”

Bhumber and Pritchard’s next project will see them using an updated version of the reactive body suit in a dance performance.