“Limitless potential” of Indigenous spirit at Sound House: Night of the Jaguar 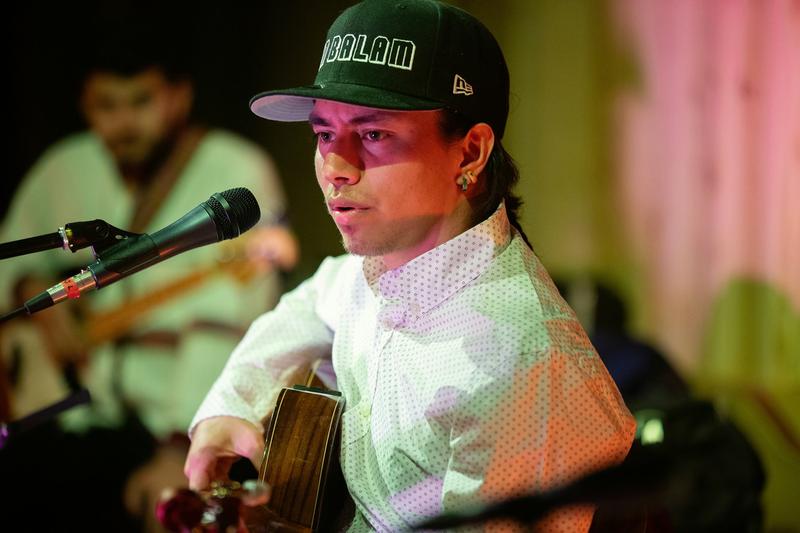 “We as Indigenous people or as Latinos, are not criminals. We are powerful spirits. We are just as valuable as anybody else. But society sees us as less.” Courtesy Sarah Race

An intense and fiery atmosphere enriched by a strong cedar aroma engulfed me as I stepped inside the Haida House at the Museum of Anthropology on a chilly April night. Wild echoes of guitar and drums immediately shot to my heart. The audience was bobbing their heads to the rhythm and swaying their bodies, spellbound by fervent tunes.

Taking pride in his Indigenous and Latino blood, Balam S. Antonio uses music as a compelling means of storytelling on “struggle, anger and love” of his community and his people. The music of his band, Kin Balam (The Path of the Jaguar) is a rich, enthralling combination of Indigenous Central American music, flamenco guitar and Afro-Latin jazz that ties together “a true multicultural, multi-ancestral spirit.”

The Sun Runs Free touched the audience’s hearts with Antonio’s preliminary anecdotes of his fascinating journey of personal enlightenment. His viewing of sunrise in Spain signified a momentous, transformational realization of personal identity. To him, it was a signal to leave an old life of anguish and sorrow behind and steer towards life instead of death. The song brimmed with vitality and zeal through Antonio’s mesmerizing flamenco guitar techniques. Wooden instruments in the background produced intricate layers of emotional depth. Dancing silhouettes of the audience imprinted on the wall like wild, liberated spirits.

Generations was Antonio’s heartfelt attempt to pay homage to his parents’ arduous flee from political turmoil and persecution by the death squad in Central America. He elaborated on the collective pain of his community — an oppressed Indigenous people with “no voice, no economic and political power.” They are merely left with “poverty, struggle, guns, alcohol and drugs.” The heart-wrenching and painful history was portrayed by expressive and piercing sounds of Indigenous Central-American instruments. The crowd was chanting and clapping along in the name of transcending love, unequivocal solidarity and unrelenting queries into education, democracy and humanity.

“We as Indigenous people or as Latinos, are not criminals. We are powerful spirits. We are just as valuable as anybody else. But society sees us as less.”

Warrior Spirit was a shout-out for respect for each other’s existence and acknowledgement of the native peoples’ land. Incessant taps on the guitar resembled thumping heart beats, or deep echoes from thousands of years of long-standing and persevering Indigenous heritage. The song was strikingly powerful as a call of defiance that questioned the legitimacy of institutions and asserted the power back in the people’s hands.

The night could be encapsulated as “limitless potential” and “rebellion” in Antonio’s own words. It brought the struggle of the Indigenous people that has been “misunderstood and overlooked and destroyed” closer to the community. Antonio hoped to bring the thundering and urgent roar to impel the public to “face the reality of colonialism and colonization” and “become part of the solution.”

“I would like [the general public] to learn the from the love, the light, the teachings that we have; to see us as brothers, to see our music as something evolutionary.”