Review: Testosterone is a campy, hilarious look at transmasculinity 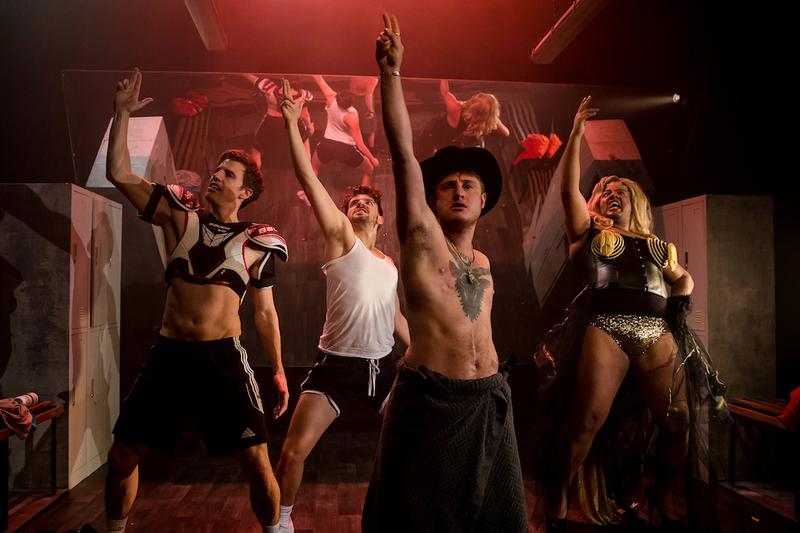 These imaginary sequences form the most delightful part of the show. Courtesy Luke Forsyth

A single spotlight shines on a gym changing room, a low voice crooning along to The Jungle Book’s “I Wanna Be Like You.” Writer and lead actor Kit Redstone turns to the audience, looking abashed, and apologizes for his terrible singing voice. Then, pulling out a gym bag from under a bench, he explains why he wrote the play.

It’s not an introduction or a break in character. It’s the first line of dialogue, with Redstone playing himself.

Testosterone, which opened its Canadian tour at the York Theater, is an autobiographical one-act play from London company Rhum and Clay. The play explores a transgender man’s first time in the men’s changing room and his musings about what it means to be a man. These questions lead to extended imaginary sequences, such as a Western stand-off over a borrowed towel or a flashback to a middle school disco dance, all inside the gym changing room.

These imaginary sequences form the most delightful part of the show, combining Rhum and Clay’s melodramatic physical theatre with a jokingly self-aware narrative. What ensues? Absurdity. Redstone pauses and rewinds the actions of other characters like a YouTube video. The three background actors change roles within seconds, pulling hats or jackets out of gym lockers and then taking them off for another scene. Jocks pretend to self-flagellate with sweaty towels before Dionysus. Props are reused in increasingly incredible ways, like a protein shake as a syringe.

Testosterone is not just oddly humorous, but terrifying and poignant. It commits to exploring power dynamics and undeserved ego, and how these things come from society. Redstone despises and yet longs for these masculine privileges, causing the dilemma to intensify.

The play isn’t without flaws, as it focuses on transmasculine ideas of masculinity. It concentrates on hormone therapy — the most mainstream association with transgender people — and doesn’t discuss the full complexity of transitioning, like name changes or social dysphoria.

In these ways, the show may be simplistic, but it’s still well-made. In the end, Testosterone isn’t about characters in a story. It’s about ideas and stereotypes visualized, manipulated and explored. With a leather jacket, a gym bro becomes masculinity. Blue balloons become held-back tears. A drag queen transforms from a jock to the goddess of androgyny to a middle school girl to Kit’s frustrated mother. With the change of a shirt or a different soundtrack, even the worst place on earth — a gym changing room — can be anything.

Testosterone is playing at the York Theatre on Commercial Drive from October 2 to 13. Tickets range from $10 to $45. Contact UBC Pride for a reduced price.