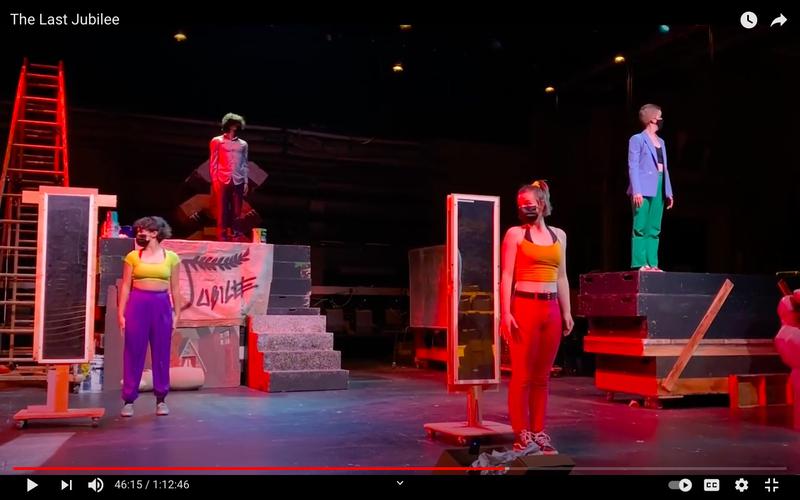 The framing, however, falls flat for me in the rest of the scenes. Anupriya Dasgupta

In the year 2050, art has been outlawed by the technology-driven fascism of the ruling regime. In this dystopian “cabaret-thriller,” as Muñoz calls it, policing and surveillance prevails, putting artists under the threat of being arrested just for creating. Dedicated to artists who have struggled due to the pandemic, the show raises pertinent questions about live theatre but ultimately falls flat in its disarrayed attempt at metatheatre and at being socio-politically conscious.

After a rough exposition, it isn’t very clear what it is exactly that the artists are fighting against and why it matters. The antagonist, ominously referred to as simply ‘the government,’ is entirely absent in the way that the threat comes across in the show. We don’t learn anything other than that there has been a civil war that created some sort of ‘divide’ and geared this technologically-driven regime against artists. The script doesn’t really establish why art is illegal, or what even defines art. While I did not expect nuanced political commentary here, it would have helped to clarify why creating art in particular threatens this government — something that the characters reiterate over and over again throughout the performance.

More importantly, it does not come across why these artists in particular are threatening to the vague omniscient entity that is ‘the government.’

The characters attempt to demonstrate the value of their work through performing a set of varied pieces in several livestreams — each of which is cut by the authorities — but the individual pieces don’t come across as striking socio-political commentary that would stir the masses. Moreover, in a tragic failure of ‘show not tell,’ each scene performed as part of the livestreams feels almost entirely dissonant of each other and the argument scene in particular is too on the nose to be able to successfully present as metatheatre.

The highlights of the show, for me, are the parts where the characters raise existential questions about the nature and the role of live performance. “But what’s the point of doing theatre if no one’s going to see it live?” asks Collis Handford, the actor playing Hail, moments after the group’s first livestream attempt has been cut. It is valuable to ask what theatre is and what it might become in a setting where it is no longer possible to perform in front of live audiences, particularly in the context of the pandemic.

This question is explored well using the documentary/livestream format. Despite it being a recorded performance that I did not watch live, some parts distinctly still feel like conventional theatre. The Okanagan ‘desert’ scene is great at presenting this, as Tahir’s character, Simon, gives a hearty solo performance, utilizing familiar conventions like the suspension of disbelief and typical stage lighting. Clearly, theatre is not defined solely by live performance but can also be characterised by other elements. The ensemble dance scene explores this question as well, but the camera angles make it not as effective.

The documentary/livestream concept has a lot of potential, particularly in investigating the social reality of the pandemic problem and in creating the metatheatre that Muñoz seems to be after. Unfortunately, I did not find the script complementary to this at all, sorely lacking the subtlety that makes metatheatre work, and the narrative seemed loose and split between many different threads (kind of like the ensemble dance scene). While the mixing of performing styles is an interesting choice, it ultimately only makes the different elements of the show even more dissonant.

Muñoz’s direction is interesting, and there are some great frames including the oscillation between camera angles in the Okanagan desert scene and the scenes where he captures the characters sitting in the audience from the stage. The way the lens switches from livestream in one moment and to documentary in the next is also done quite well.

The framing, however, falls flat for me in the rest of the scenes. While the framing felt a lot more fleshed out in the Okanagan desert scene, the scene about love on the flipside came across as confusing and one-dimensional. It also felt particularly removed from the other pieces in the Jubilee’s repertoire. Muñoz has another opportunity in this scene to explore what theatre really is, but the overemphasis on camera angles here and the lack of the actors using their bodies makes it ineffective.

Having the director present in the show as a character raises some fantastic questions about the role of the director during an ongoing live theatre performance. It, however, did not feel like Muñoz was the most conscious or intentional about this and how his character was one of, if not the most, important characters in the play.

One of the key messages the show tries to convey is that “art is a necessity, not a luxury,” but in its ‘tell not show’ approach it is unable to. The characters take up a lot of time (unnecessarily) discussing how dangerous what they are doing is, but I am unable to find the urgency of the situation in their performances and in the way the script is structured. This prevents audiences from feeling the fear and paranoia that these characters are supposedly experiencing, and it ultimately just feels disingenuous.

The final scene drags on for too long after we hear police sirens outside. I could only imagine two neighbourhood patrol cops casually smoking cigarettes outside and chatting about last night’s game while waiting for a group of annoying kids to give up the play and go home. It was hard to feel like the artists were an actual threat to the government at this point due to the pace of the scene.

My biggest criticism hinges on how socio-politically tone-deaf the show feels, particularly in regards to issues of policing and climate change. I have concerns about the type of dystopian futurism the writers are presenting here, which can often be problematic if there is a lack of consideration of the oppressive systems that have already existed in the past or exist in the present. For this reason, the approach towards policing in particular does not sit right with me. This lack of awareness adds to how inconsequential these characters in particular feel towards rebellion against the regime.

The existential questions about the nature of theatre, especially within the pandemic context, and the stylistic approach to exploring these questions is interesting and for the most part effective. While Tahir stands out among the other performers, Dobles Gering is also a pleasure to watch as a dancer and through her powerful spoken word performance.

However, ultimately the show is unable to carry the point home: that art is a necessity and not a luxury. There is not enough conflict and too much resolution, to the point that the resolution becomes pointless.

The show ends with the ensemble singing melodiously and soulfully together, but ironically, the disarray of everything before this moment cannot be saved by the harmony of the music.