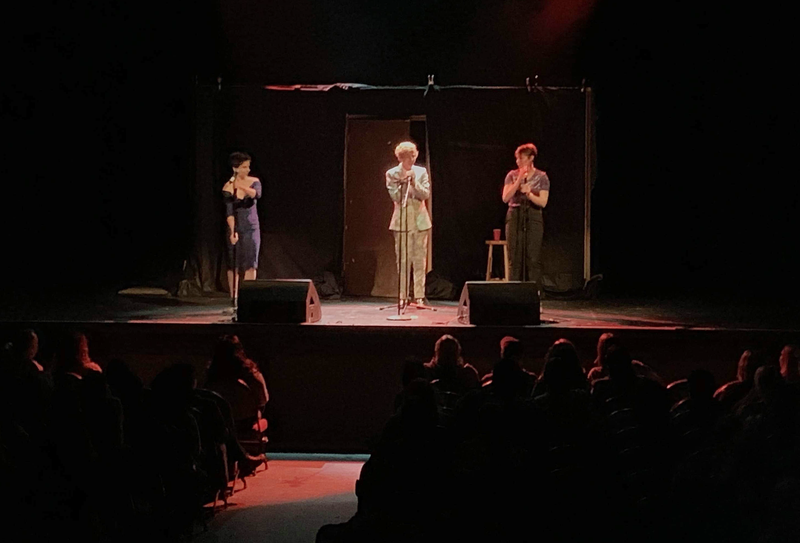 The packed theatre quickly came to realize that the Tiny Tricycle Poets were more than merely a supporting act. Photo courtesy of Angelica Poversky

The Tiny Tricycle Poets, a Vancouver-formed poetry trio of self-described “young twenty-something queer clowns,” took the stage on May 24 at The Vogue Theatre to open for famed Canadian slam poet Shane Koyczan’s sold out show.

But the packed theatre quickly came to realize that the Tiny Tricycle Poets were more than merely a supporting act.

On their own, their voices and stories are powerful — but together, Emma Field, Angelica Poversky and Andrew Warner complement each other, feeding off of their partners’ contagious energies to form a mesmerizing, a cappella-style live looping of spoken words and sound effects including bird chirps and flute sounds. The trio ties pop-culture references into their commentaries on social issues, of course alluding to leading ladies: Alexandria Ocasio-Cortez and Kim Kardashian.

Field, Poversky and Warner make you wish you had spent time at a clowning course sandwiched between a “nude hot yoga studio and a chicken processing plant in the depths of East Vancouver” to find your own clique of quirky, talented friends. Watching the Tiny Tricycle Poets perform is like watching your elementary school’s group of cool kids huddle together and play with the fanciest Pokémon cards. You’re captivated, drawn in with a case of second-hand excitement as if you yourself were holding the elusive Shining Charizard, or in this case, having the time of your life frolicking around on stage with the trio.

Even the late-comers who showed up just for Koyczan held shocked faces that read, “Oh shit, did they really just say that?” and stopped struggling to find their seats to instead lean over the balcony for a better glimpse of the pleasantly bizarre troupe. The Tiny Tricycle Poets transformed the upper balcony of The Vogue Theatre into a mosh-pit of confused, intrigued adults wanting more, questioning how these kids assumed the confidence to speak on controversial topics such as abortion, feminism and identity crises with an air of intelligence and grace. But, as clowns do best, the trio combatted the audience’s perplexity with jokes about Warner’s sexuality, the painstaking task of trying to date a fuck boy and their online dating profiles.

What they lacked in legitimate tiny tricycles, the Tiny Tricycle Poets made up for in grand stage presence, innovative wackiness and friendliness. The unique charisma of each member filled the room as the group scrambled across the stage, rotating between speakers to share personal anecdotes in spoken word style.