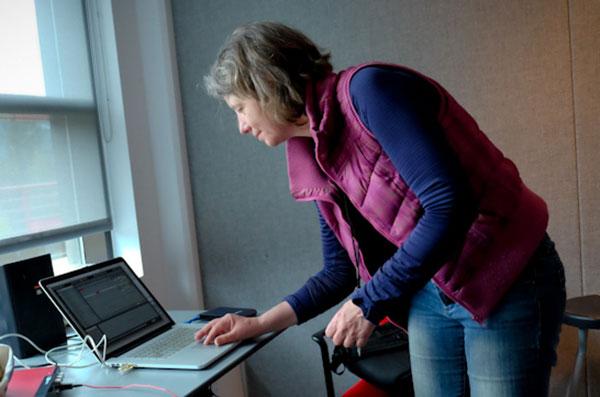 If you aren’t a straight, cis, white man, breaking into the electronic music industry can be tough.

Gibson is an integrated media artist, musician and sound engineer based in Vancouver who graduated from UBC with a BA in music in 2006. She completed her degree while studying full-time and working as a freelance musician and IT teacher, while also caring for three children.

She said her degree gave her “a common language of communication with other musicians” and let her broaden her base of musical theory to unlock the core of her subject.

Gibson values the bonds she has formed with her professors, and marks them as an important support network.

“They remain a resource for me now. I can always go to them, ask them questions, they are very helpful people … alumni are always supported in the music faculty at UBC,” she said.

Post-graduation, Gibson turned to the technical side of things, forging a career in audio engineering. She has seen audio synthesis technology develop from its infancy, and is well-versed in solving technical problems on the spot.

Her workshops are open to both rookies and seasoned professionals looking to learn more about their equipment. Participants can expect plenty of trial and error, with a focus on “fast-failure” techniques encouraging experimentation in an open and welcoming environment.

The workshops, while emphasizing equity, inclusion and respect, will result in each participant creating something new that they can be proud of, even if it’s a little “out there.”

According to Gibson, while some may consider the creations extraneous or obscure they “might [actually] be the saving grace” of today’s electronic music scene.